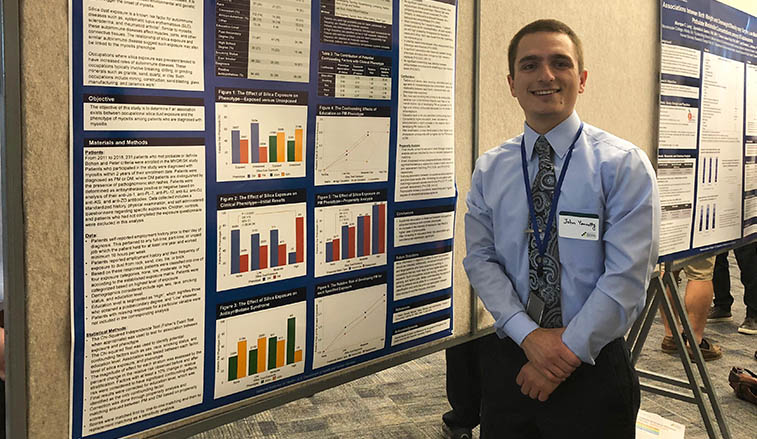 John Yannotty, a senior mathematics major at Slippery Rock University, presented his research at a poster presentation at the National Institutes of Health Aug. 9 after completing a 12-week internship at the NIH.

SLIPPERY ROCK, Pa. - A mathematician may seem out of place working with clinicians at the National Institutes of Health researching matters of public health, but don't tell that to John Yannotty.

Yannotty, a Slippery Rock University senior mathematics major from Butler, recently completed a summer internship at the NIH after being selected to assist a biomedical research group exploring environmental triggers that cause an autoimmune disease called myositis.

"Math is applicable to a variety of fields," said Yannotty, who has taken an interest in biostatistics, the process of applying statistics to topics in biology and experiments in the fields like medicine, pharmacy and agriculture. "I don't need to know biology but biologists do a lot of statistical analysis throughout their research and they have a need for statisticians."

At NIH, the largest biomedical research institution in the world, the more than 1,000 principal investigators and 4,000 postdoctoral fellows need the best interns to assist with their research. Yannotty turned down an offer for another competitive research internship at Carnegie Mellon University to accept the 12-week appointment at the NIH in Bethesda, Maryland. The NIH is operated under the U.S. Department of Health and Human Services. Yannotty worked in a lab within the National Institute of Environmental Health Sciences, one of 27 institutes and centers that make up the NIH.

"Anyone who has done an internship at the NIH will be known to have done good work in the field," said Dilrukshika Singhabahu, SRU assistant professor of mathematics and statistics, who conducted research with Yannotty at SRU that prepared him for the internship. "There are a lot of good mentors there who are current in research from different fields. They have a lot of data that they've collected and they need people to analyze the data."

Yannotty joined a group that analyzed which environmental factors contribute to the onset of myositis, which is inflammation or swelling of the muscles. Myositis occurs when the body's immune system, which normally fights infections and viruses, is misdirected and attacks normal, healthy tissue. Although myositis affects more than 50,000 people in the United States, it is difficult to diagnose; it causes significant disability and even death; it's unclear what triggers it; and there's no cure for it.

As one of three interns -- the other two were computer science and environmental science majors -- Yannotty was tasked with cleaning data and testing hypotheses using statistical models to pick up trends and identify hidden relationships. Yannotty particularly looked at data to identify a correlation between people with exposure to silica dust, such as coal miners and construction workers, to those diagnosed with myositis.

"I was very prepared as far as coding and what type of analysis to do," said Yannotty, who pointed out that SRU courses such as Operations Research and Statistical Computing helped prepare him for the internship. "(The NIH researchers) gave you a problem and a dataset and said, 'You know this stuff, now show me how to do it and make an analysis.' Even the stuff I had to learn on my own, I was (prepared because I was) challenged in my classes, with theory and applying methods."

"John is a strong, tenacious learner," said Singhabahu, who introduced Yannotty to machine learning techniques on research projects involving data from functional magnetic resonance imaging that measured brain size and activity related to patients diagnosed with Alzheimer's disease. "When I gave him the data he had not done machine learning yet, but he started to investigate and I was very impressed with the work he did."

Yannotty said communication was the most important part of his internships, especially as a mathematics major working with medical professionals, including his supervisor, Adam Schiffenbauer, a rheumatologist.

"I'm used to working with math people, so I had to make sure I didn't jump too far into detail and not get too excited about the math and instead focus on the bio results," Yannotty said. "That's important because no matter what industry I work in or wherever I go, I'll need to make sure when I'm presenting to focus on the answer and not all the math behind it."

Yannotty, who admitted to being a shy student before coming to college, was attracted to SRU because of the relationships he could have with faculty at a smaller school. Now, he's considering pursuing a doctoral degree so he could teach, but he's also open-minded to all the ways he can apply a math degree to other industries, all thanks to his NIH internship.

"I enjoyed being with people from different fields because they just have a different perspective," Yannotty said. "This was a phenomenal experience that I'll use when looking at graduate schools."