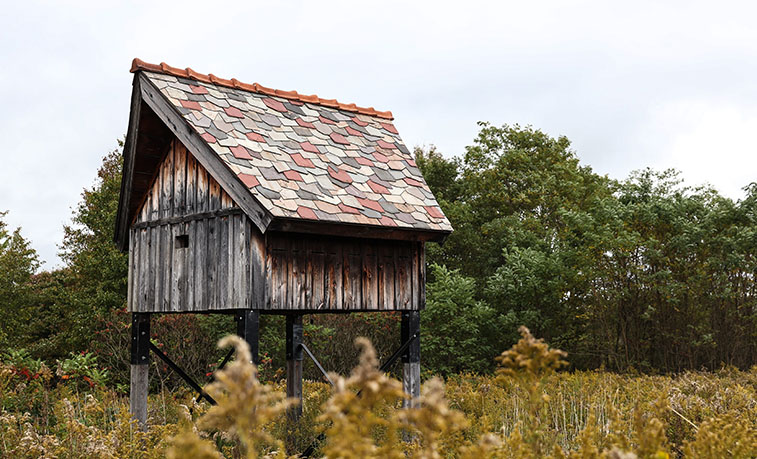 The bat house at Slippery Rock University was relocated to the Macoskey Center in February 2018. Macoskey Center personnel continue to advocate for bat education at events on campus and across the nation.

A cofounder of a collaborative called the Climbers for Bat Conservation, Davis is bringing together a unique combination of groups - rock climbers, land managers and bat biologists - in an effort to better understand the furry flying mammals.

As part of his efforts, Davis will speak to rock climbers tomorrow, Oct. 5, at Natural Bridge State Resort Park, in Slade, Kentucky, in the first meeting of the CBC east of the Mississippi River.

"Rock climbers sometimes can have more information about the bat population than biologists because the climbers are using the cracks and crevices (of rockfaces) where bats are found," Davis said. "By working together, we can better understand bats while keeping rock climbing sites open."

Davis will join Rob Schorr, director of the CBC and a research associate at Colorado State University; Mike Armstrong, of the U.S Fish and Wildlife Service; and Andrew Reed, a board member of the Red River Gorge Climbers' Coalition, to discuss the need for a partnership between the CBC and climbers in the Red River Gorge area in Kentucky. The CBC was established in 2014 to identify important bat roosts and understand why bats choose certain rock features compared to others.

Davis said that rock climbing sites are sometimes shut down by federal agencies like the U.S. Fish and Wildlife Service if a threat to animal habitat is suspected. Unlike rock climbers affecting birds' nesting locations, bat populations might benefit from the presence of rock climbers because they are clearing some of those cracks and crevices bats use. However, bat biologists need more data that rock climbers can potentially provide, such as detecting the presence of bat species with reports or submitted photos to websites like iNaturalist.org.

"These synergistic relationships are not just for biologists to obtain more data from the climbers, but they enable the climbers to be citizen scientists," Davis said. "People love to climb and a lot of the them care about preservation. We will meet to discuss what information is relevant to biologists and what is reasonable and safe for climbers to collect."

The primary threat to bat populations is white nose syndrome, which is a fungal disease that has killed more than 6 million bats in North America since 2006. It is considered by the Center for Biological Diversity as "the worst wildlife disease outbreak in North American history and shows no signs of slowing down."

White nose syndrome is the result of a fungus called Pseudogymnoascus destructans that invades and ingests the skin of hibernating bats, including their wings. It causes bats to wake up more frequently during the winter, which causes the bats to more rapidly use up their limited fat reserves.

There is an 8-foot-by-8-foot bat house, which is near SRU's Robert A. Macoskey Center for Sustainable Systems and Research, that mimics their natural habitat of caves. The bat house has not been opened to analyze bats since it was relocated from near the Ski Lodge in February 2018. However, in August, the Macoskey Center hosted a "Bats & Brews" event with North Country Brewing Company where attendees could sample beer and learn about bat conservation and behavior. The event was attended by nearly two dozen people and during the event the organizers used an Echo Meter Touch, a device that detects ultrasonic bat sounds. They identified the presence of three species of bats near the Macoskey Center: the hoary bat, the evening bat and the eastern red bat. The little brown bat, which is most susceptible to white nose syndrome, wasn't found.

"People have a lot of myths and misconceptions about bats; they think they are dirty and a nuisance," said Paul Hedzik, a graduate student from Freedom majoring in environmental education, who is a graduate assistant at the Macoskey Center and a "Bats & Brews" organizer. "There are actually a lot of benefits to having bats around and the biggest thing is pest management. One little brown bat can eat about 1,000 mosquitos per night. They greatly reduce human's reliance on pesticides and they are great pollinators."