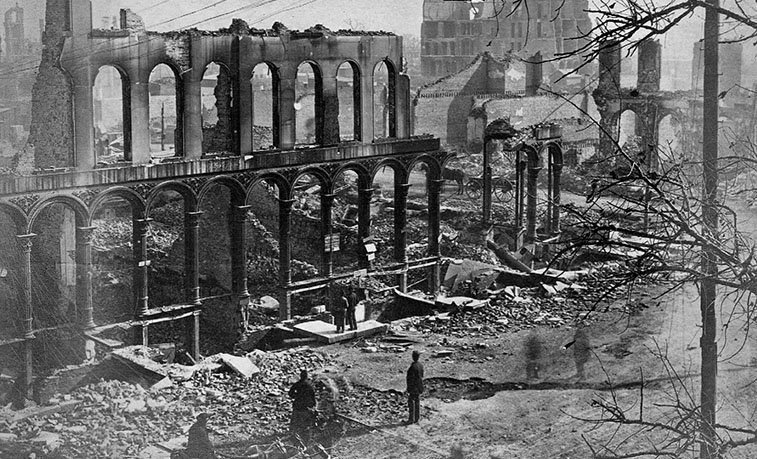 SLIPPERY ROCK, Pa. — Urban historians like Aaron Cowan refer to cities that grew at a rapid rate during the Industrial Revolution as "shock cities." More shocking than these cities' rapid growth is how quickly they can be destroyed by fire, noted Slippery Rock University history and safety management professors reflecting on what happened in Chicago on this date, Oct. 8, in 1871.

"The Great Chicago Fire is one of the most well-known urban disasters," said Cowan, associate professor of history, who authored a book about urban revitalization titled "A Nice Place to Visit." "One of the things with Chicago is it just grew so fast and then it put a lot of effort into promoting its rebirth in the aftermath (of the fire)."

But for safety experts like Jim Culligan, instructor of safety management, who teaches a fire safety class at SRU, Comprehensive Emergency Response and Fire Service, the magnitude of the blaze is anything but a shock. While building regulations existed in Chicago since 1837 to address the densely developed wooden structures and their open hearth fireplaces, they weren't codified and administered until the city's Department of Building was established in 1875. The National Fire Protection Association wasn't formed until 1896.

"It was the perfect storm," Culligan said. "There were dry weather conditions and almost all the buildings were entirely made of wood, but even for the roads and sidewalks they used sawdust to keep the dust down from the horse drawn buggies. Almost everything was made of a combustible material, so when the fire started (...) it had enough oxygen to spread quickly over a 4 square mile radius." 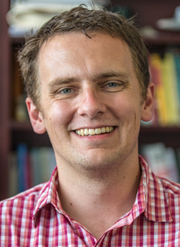 The haste in which the city was built was also a factor. Cowan noted that Chicago in 1840, with a population of approximately 4,500, was not much bigger than present-day Slippery Rock. But when the fire destroyed a quarter of the city 30 years later, Chicago's population was more than 300,000. This was the result of industrialization: with agriculture becoming more mechanized, there were more people coming to the city to find work, including immigrants, stemming from political unrest in Europe and a potato famine in Ireland.

"The question was, 'How do we build and how do we build fast?'" Cowan said. "The most efficient and cost-effective way to build was out of wood, and because of industrialization, Chicago was pulling all the natural resources from the Midwest - the grains, the timber and the livestock."

One particular livestock is often blamed for the Great Chicago Fire and that's Mrs. O'Leary's cow. As the apocryphal story goes, the fire was started in or around Patrick and Catherine O'Leary's barn along DeKoven Street when a cow kicked over a lantern.

Other theories hold that humans or even a meteor might have been responsible for the event. The true cause of the blaze was never determined.

"Human nature is we like to find a scapegoat, but it's interesting to think about who Mrs. O'Leary was," Cowan said. "She's Irish and there were a lot of stigmas and stereotypes with Irish people. (People would say,) 'Well, why is she milking a cow in a barn at night next to a lantern? If she was industrious, she would've gotten all this done earlier.' There was certainly a lot of anti-Irish sentiment in Chicago at the time because there were a lot of Irish immigrants and they were starting to become politically influential."

Mrs. O'Leary turned into a recluse after the fire and died in 1895. It wasn't until 1997 that the Chicago City Council exonerated Mrs. O'Leary and her cow.

Despite the damage by the Great Fire, Chicago's water, sewage and transportation systems remained intact. Cowan said that because the wealthier sections of the city were unaffected, Chicago continued to be a boomtown.

Chicago used the disaster to celebrate a rebirth. By 1893, Chicago's population exceeded 1.5 million and it hosted the Word's Columbian Exposition, which attracted 27.5 million tourists to the city.

"It's an interesting moment for Chicago," Cowan said. "If you can say the city was fortunate, they were fortunate in that they were a boomtown when it burned and they could rebuild."

The city also beefed up its fire department and enforced new building codes, signaling changes that would affect the entire safety industry, but as Culligan noted, regulations couldn't keep up with the rapid growth. The deadliest single-building fire in U.S. history, with 602 deaths at Chicago's Iroquois Theatre, occurred in 1903, resulting in even more building code reform. Industrial fires, like the one at the Triangle Shirtwaist Factory in New York in 1911, led to new labor laws.

"Standard practices were changing (after the Great Chicago Fire), but it took time to progress to where we are today," Culligan said. "Even (the Occupational Safety and Health Administration) didn't come about until 1970. People trying to put regulations in place to control things like factories created a lot of pushback over the years. Even today, you can see there is opportunity for improvement in what companies are doing. We have 500 students in the safety management major at SRU for a reason: because organizations are still struggling to meet compliance standards in fire safety and other areas."

History students at SRU are also learning from the Great Chicago Fire. "Smoldering City: Chicagoans and the Great Fire," by Karen Sawislak, is assigned reading in Cowan's 300-level The American City class. However, the history of shock cities burning at the scale Chicago did 148 years ago will not repeat itself.

"We don't see anything like that anymore," Cowan said. "Most American cities have had some kind of significant fire because they were built mostly out of wood instead of steel and concrete as they are today, but Chicago's Great Fire is by far the most prominent."