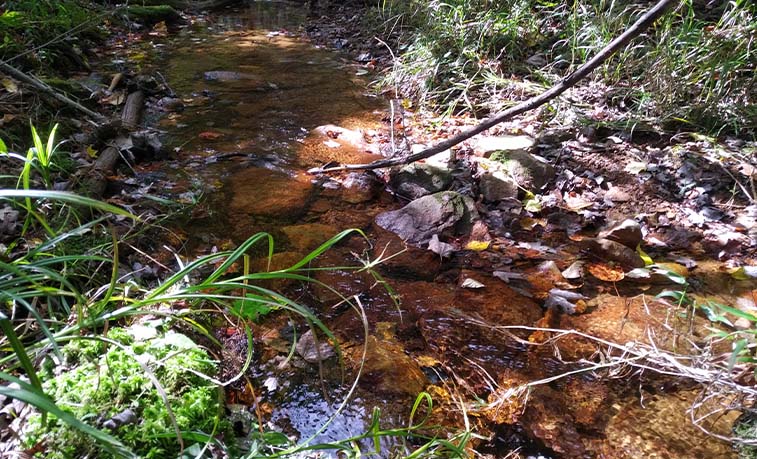 SLIPPERY ROCK, Pa. — While most Pennsylvanians witness leaves changing colors this time of year, from rich greens to yellows, oranges and reds, another color change has been occurring in local streams during a much longer period of time. And fallen leaves are helping provide answers for researchers at Slippery Rock University.

The cause for this change is the result of acid mine drainage, known as AMD, from abandoned mines entering waterways.

Faculty and students from SRU's Biology Department are studying how AMD affects the microbial communities of afflicted streams and how that affects the habitat, such as the breakdown of organic matter that includes fallen leaves. Their research also considered ways to remediate AMD sites. 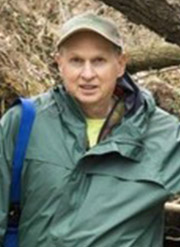 "This is a huge problem in Pennsylvania as approximately a third of streams are affected by AMD," said Dean DeNicola, a professor of biology and one of the lead faculty researchers. "Those streams are loaded with metals, which make them appear orange and prevent many organisms from living there. So if you can find an inexpensive way to treat and restore them, you are able to reduce pollution and revive an important habitat."

Alexis Neff, a 2020 SRU graduate with a degree in biology, was recruited to aid in research efforts during the 2019-20 academic year.

The project involves observing three different streams near Slippery Rock: one currently suffering from AMD, one being treated with a filtration system and one that has never experienced the effects of AMD.

The filtration system is considered passive treatment, constructed of limestone that only requires gravity to filter the water. It was installed 25 miles east of the stream by the Slippery Rock Watershed Coalition, a group focused on the conservation and remediation of local waterways.

At each site, leaf packets constructed of leaves from maple or beech trees, which are native to the observation areas, were inserted into the water during the fall 2019 semester to encourage bacteria growth. DeNicola, Maltman and Neff observed the colonization of bacteria on these leaves and the rate in which the organic matter was broken down.

From the surrounding environment, they would also collect a total of 20 bacteria samples across all three test sites to test their DNA to understand what kinds of bacteria were colonizing in these environments. DNA was sent in February 2020 to GeneWiz, a DNA sequencing service located in Plainfield, New Jersey.

Upon observation, the team would see no significant breakdown of the leaf packets at the site suffering from AMD compared to the treated and natural sites. The reason for this lack of breakdown was related to the disappearance of bacterial communities that were not able to thrive in AMD afflicted sites.

"It appears that acid mine drainage prohibits the growth of bacteria known for breaking down organic material," said Maltman. "They were not present in any significant amount, but they were present at the treated and natural sites."

DeNicola also noted that some of the bacteria found in the AMD sites were, "some you know you'd find in very acidic environments compared to others."

The resurgence of some bacteria communities in the treated site provided hope that filtration systems such as the one implemented might be a cost-effective way to help alleviate the effects of AMD. 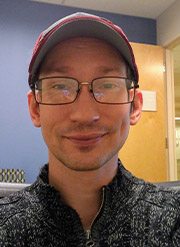 Though, when observing some of the bacteria that were able to thrive in the AMD environments, Maltman suggested that there might be another possible component to environmental remediation planning: bacteria that are able to break down toxic materials into safer compounds.

When results of the types of bacteria that resided in the AMD and treated sites came back, the team discovered strains of bacteria that could grow in the presence of highly toxic compounds. This notably include selenium and tellurium, metals which often take a toxic form in association with mining activities.

To confirm their findings, Neff cultured bacteria in the toxic forms of these elements. Observation revealed that the bacteria were highly resistant, and even have the potential of removing the toxic chemicals and breaking them down to less toxic forms.

"If the compounds are there, nature will adapt and the bacteria learns to remove compounds from water," said Maltman.

Maltman believes that this could be another added step to improving current environmental remediation regimes by helping to "jump-start" the treatment process. However, more testing is necessary.

For more information about the biology programs at SRU, visit the department's webpage.