‘And the winner is …’: SRU president raffles off use of personal parking spot 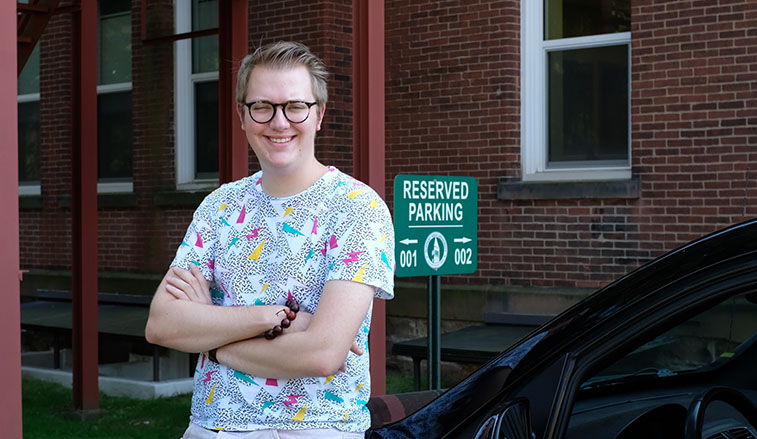 Slippery Rock University student Tom Fabian was the first student to win access to President William Behre’s parking spot. Behre awarded use of the spot to a trio of students for one week through a raffle.

SLIPPERY ROCK, Pa. - Being a university president comes with privileges, like having your own parking spot. William Behre, president at Slippery Rock University, covets a different privilege: serving SRU's students. That's why Behre recently started raffling off the privilege of using his parking spot for one week to a trio of students.

"I have something that I don't use and it's of great value to students, so why not share it?" said Behre, who lives a short walk up Maltby Avenue from his parking spot in front of Old Main. "I felt like it was a waste not having someone else use the spot and it's a neat idea to encourage student engagement.

Behre, who became SRU's president in July, first came up with the idea when he was provost at his previous institution, Georgian Court University, and decided to continue the practice at SRU. The first opportunity was given to students at a series of leadership meetings last month, attended by presidents of student clubs and organizations.

"This just shows how much he cares about students," said Tom Fabian, a senior communication major from Burton, Ohio, who won the first raffle after attending the leadership meeting Sept. 5 as the president of the Film Society at SRU. "Whenever I hear President Behre speak, he always puts students first. This is just another example of him doing that. He didn't have to go to our meeting and he didn't have to give anyone his parking spot, but he did because he wanted to do something nice for students."

Rather than Behre's Subaru Forrester or Impreza parked outside Old Main, Fabian parked a Pontiac Torrent in Behre's spot during the week of Sept. 17. Fabian lives off campus, and the car belongs to his girlfriend, but having access to the spot came in handy because Fabian is an executive producer for WSRU-TV, the student-run television news station, which has its studio in nearby Maltby Hall.

Fabian said he didn't tell his friends about winning the raffle, joking that he didn't want them asking for rides, so many were surprised when they saw his photo on the University's Twitter account, @SRUofPA, announcing him as the winner.

"They were like, 'Wait, when did this happen?'" Fabian said. "I also got a couple of glances from people who were probably thinking, 'That's not President Behre.'"

Behre said he plans to find other ways to raffle off use of the parking spot for other students at future meetings and campus events.