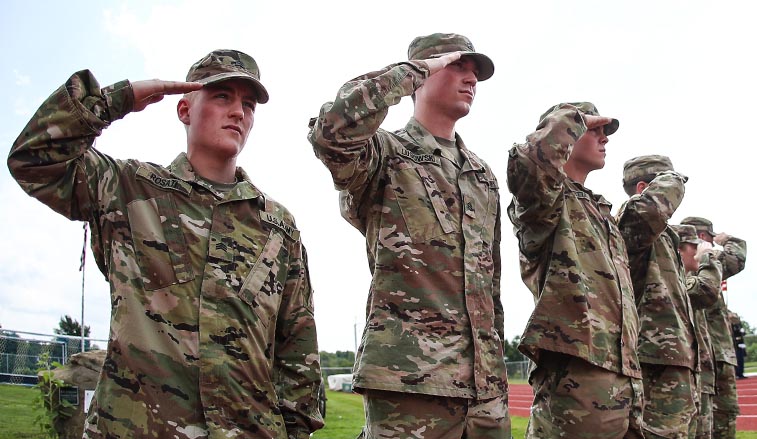 SLIPPERY ROCK, Pa. - The weekend. A time to unwind from the work week and grab some R & R. And while most people would take that to mean rest and relaxation, for more than 90 members of Slippery Rock University's Army ROTC program, it means rucking and rappelling as part of their Oct. 26-28 Field Training Exercises.

The training is hosted one weekend each semester by SRU's Frontier Battalion. Each of the FTX activities is specifically designed by senior cadets to promote leadership, team building and critical thinking, particularly for the unit's first- and second-year members.

From rucking through miles of rough terrain to camping in frigid temperatures, the event serves as motivation for the cadets to move beyond their comfort zones and work to become a tighter unit.

"Every year we do a field training exercise that's training for real-life situations that students may be faced with when deployed," said Stephen Cooper, a senior finance major from Johnstown and ROTC public affairs representative.

The three-day FTX will begin with students being flown from the farm of Bob Watson, former SRU vice president of student life, via Boeing CH-47 Chinook and Sikorsky UH-60 Black Hawk helicopters to the Army Reserve Training Center in Meadville. The base is home to a Keystone Training Site where cadets will rappel down a 60-foot tower upon arrival. Once at the bottom, they are sent to base control where they will live and provide "protection" from enemy combatants as portrayed by senior class ROTC members.

Cadets will take part in two "missions" during the weekend including an area reconnaissance, which is exploration outside an area occupied by friendly forces to gain information about natural features and enemy presence. The second will be an operational strategic military attack that has a specific purpose, whether it be to capture a high-value target or to take out an enemy force.

"Some freshman haven't even been camping before, so it's definitely going to be a wakeup call as to what the Army entails, especially with throwing a 50-pound rucksack on your back and sleeping in the woods," said Cooper.

Cadets will sleep in a shelter called a "hooch" that is made by using an Army poncho and making a lean-to style shelter; while sustaining themselves on a diet of "meals ready to eat" or MREs, a self-contained complete field ration that is used in combat or other field conditions where food facilities are not available.

"The weekend is an opportunity for members to overcome their fears and adversity while getting a sense of what they will encounter once deployed," Cooper said. These exercises prepare them for other forms of training such as the advanced camp at Fort Knox. This is nothing compared to that. Overall, the camps, along with being in the ROTC, provide vital experience if you want to be a service member."

Advanced camp is a legally-mandated commissioning requirement, and passing the advanced camp is a requirement for graduation from an ROTC program. Cadets traditionally attend the advanced training camp between their junior and senior years, during which they are evaluated on the Army Leadership Requirements Model that assesses army attributes and competencies. While at Fort Knox, they are placed into leadership positions and evaluated by an experienced ROTC cadre.

"I take pride in being a part of an organization that's bigger than itself and having the opportunity to lead future American sons and daughters," Cooper said. "Being in ROTC gives each cadet the chance to leave a mark and legacy on the program and campus before they graduate."