SRU Afro-Colombian Dance Ensemble takes its show on the road 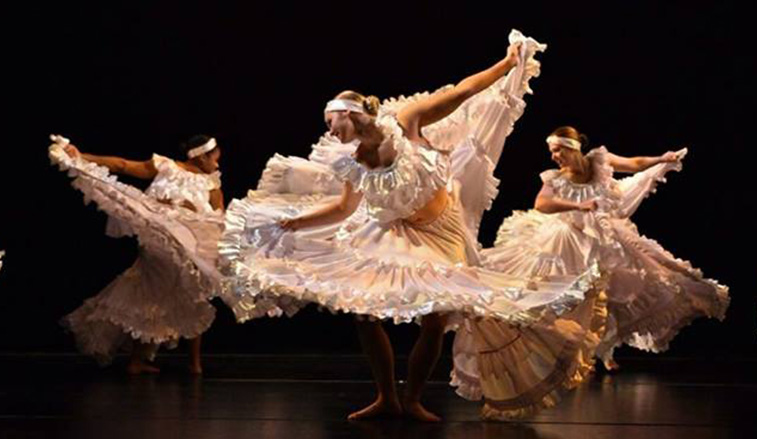 SLIPPERY ROCK, Pa. - Slippery Rock University's Afro-Colombian Dance Ensemble will take its show on the road when it performs "Palenque!" at 8 p.m., Oct. 26 at the Kelly-Strayhorn Theatre in Pittsburgh.

"The concert will pay tribute to the Colombian culture and its compelling African ancestry merging traditional and contemporary artistic expressions," said Melissa Teodoro, SRU associate professor of dance and artistic director of the Afro-Colombian Dance Ensemble. "Rhythm, song, movement and the spoken word will transport the audience to a typical scene in a Colombian village. 'Palenque!' celebrates Colombia's rich history in music, dance and poetry."

The ACDE, which promotes Latin American culture through dance, has performed throughout western Pennsylvania in numerous festivals, conferences and educational venues, as well as in West Virginia, Ohio and California.

The production of "Palenque!" is sponsored by SRU's Department of Dance, the Frederick Douglas Institute and Colombia in Pittsburgh.

Teodoro said that the performance will take viewers to a Colombian town square filled with colorful costumes, isolated body movements, sensual interactions while the poly-rhythmic sounds of drums that are caressed by the indigenous flutes fill the performance space.

"I chose the town square or plaza as the setting for the concert because it is in this space where the complex and layered cultural, economic, political and social reality of Colombia conglomerate," she said. "Town plazas are the heart and center of a community."

Besame, a group specializing in Latin American music with a special emphasis on Colombian sounds and directed by Jorge Enrique Delgado, will provide musical accompaniment. Dances and music included in the production will include traditional pieces such as bullerengue, mapalé and seresesé as well as contemporary pieces such as salsa and boleros.

The performance also features an interactive component as dancers dressed as street dancers and a fruit vendor will mingle with the audience and an actor portraying Jorge Artel, an Afro-Colombian poet, shares his socially-conscious poetry that Teodoro says "are true and raw perceptions of colonial Colombia from an Afro-Colombian perspective."

Tickets are $15 for general admission; $10 for students and can be purchased at the door or online by clicking here.