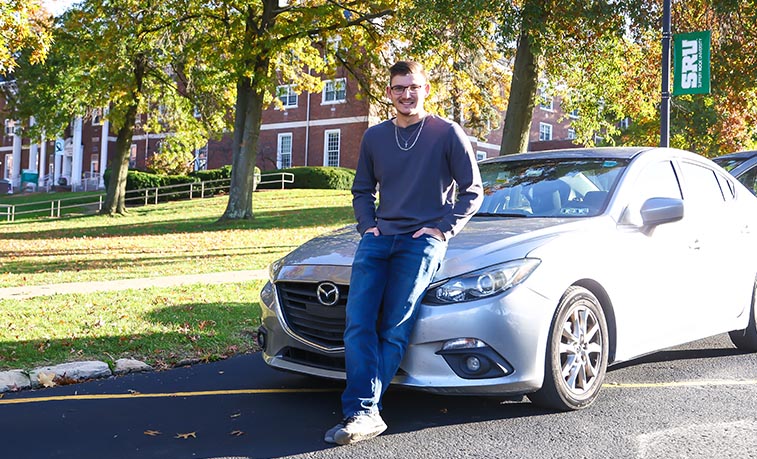 Sgt. David Duffey, a senior at Slippery Rock University, saved a truck driver’s life while driving back to campus Oct. 16.

SLIPPERY ROCK, Pa. — Heroes can take many different forms. Whether emerging from a phone booth wearing a cape, storming a battlefield wearing camouflage, or walking into an operating room wearing scrubs, heroes answer the call wherever, whenever and however is needed. So when a Slippery Rock University student recently saw a fiery crash on the Pennsylvania turnpike, he charged in wearing his fatigues and became a hero himself.

Sgt. David Duffey, a senior dual criminology and criminal justice and psychology major from Midway, was driving back to Slippery Rock, Oct. 16, from his weekend training drill in Somerset County. While driving westbound in his silver Mazda 3 on the Pennsylvania Turnpike near Irwin, Duffey saw a tractor-trailer drift off the right shoulder of the highway and slam into an overpass.

"I just snapped into action and my first reaction was to go find the driver and make sure they were OK," Duffey said. "So I pulled over, got out and started running."

The impact of the trailer hitting the bridge flipped the truck 180 degrees as flames engulfed the cabin.

"I went up toward the front and the whole cab was mangled metal and I'm screaming for the driver," Duffey said. "My adrenaline just kicked in. I saw the driver and he was half-conscious and dazed."

Duffey pulled on the passenger side door, which was facing the highway, but it wouldn't budge.

"Then I sprinted around to the driver's side because he was telling me his seatbelt was stuck, and when I got over there, there was already fuel on the ground and there was a fire going, so I couldn't get to him that way," Duffey said. "I ran back around to the to the passenger side window and, thank God, by the time I'd gotten there, he had his seatbelt undone and all I'm thinking is this thing's gonna blow at any second."

Duffey crawled through the passenger window, grabbed the driver, Shune Moore, 56, of North Braddock, and pulled him across the cab and out onto the highway. 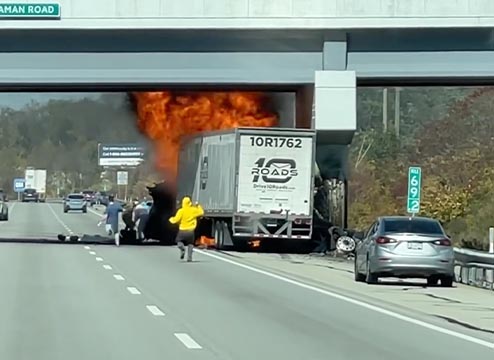 Duffey pulls the driver out seconds before the truck explodes
(courtesy of Amy Romig, Facebook)

"The fire on the driver side just kept growing as I was yanking him out. When I finally got him fully out, other people started getting there to help me pull," Duffey said.

Within seconds after escaping and pulling Moore eight feet away from truck, there was an explosion in the cabin, knocking Duffey to the ground.

"I don't remember falling down," Duffey said. "My only goal was to get this man as far away from the truck as possible."

Duffey said he thought about 30 seconds had elapsed from the time he approached the truck until the explosion, but he said it could've been longer because he lost sense of time to save Moore's life.

Amy Romig, a passenger in a car that drove upon the crash, captured the moments leading up to the explosion on video and posted it to Facebook, commenting, "There were some superheroes here who pulled the driver out."

"I snapped into 'sergeant mode' and I just started giving orders to people," Duffey said. "I was like, 'OK, you two, grab his legs and you get his arm, and I'm going to get his other arm,' and the group carried him farther away from the truck to a safer distance. I remember telling one lady to call 9-1-1 and told her where we were on the turnpike."

Rescue crews arrived and treated Moore, who was taken to Forbes Hospital with non-life-threatening injuries. Moore pointed to Duffey as the man who saved his life.

"After I gave my statement to the state trooper, the trooper looked at me and said, 'That's pretty courageous what you did; you probably saved that man's life,'" Duffey said. "I said, 'I did what I had to do. I just saw a man in trouble.'"

Duffey is a member of the 28th Military Police Company, an element of the 28th Infantry Division I of the Army National Guard. He first enrolled at SRU in 2015, but his education was interrupted several times for military service, including a deployment as a customs agent in Iraq and Kuwait from 2018-19. Although he was not in combat while deployed, Duffey said his training prepared him to lead the rescue efforts.

Duffey plans to pursue a graduate degree and become a criminal justice professor.