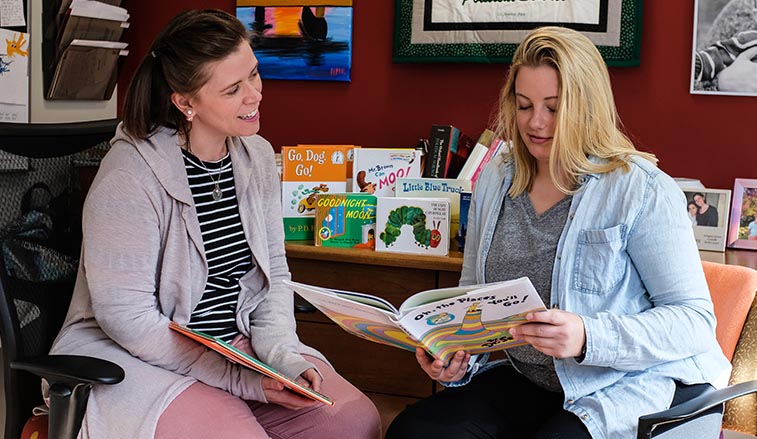 From left, Heather Rice, associate professor of political science and Slippery Rock University student Adia Achtzehn review children’s books that will be used in the “Read to Me” program where inmates at the Butler County Prison are video recorded reading to their children.

SLIPPERY ROCK, Pa. -- When a parent goes to prison, they are not the only person serving a sentence. So are their children, who have to cope with the stigma, separation and not having a personal connection with their parent. A program at Slippery Rock University called "Read to Me" is hoping to change that equation by uniting children with their incarcerated parent through video and the power of literacy and storytelling.

Heather Rice, associate professor of political science, grew up in a family with a father who was in and out of prison multiple times, so she can empathize with the children. Rice and fellow faculty member, Alice Del Vecchio, assistant professor of interdisciplinary programs, created "Read to Me" in 2014. As part of the program, Rice and Del Vecchio take SRU students into the Butler County Prison, meet with inmates who qualified for the initiative through the prison's screening process, have them select a children's book from an approved collection, film them reading the book and then send the DVD to the inmate's family with a signed note from the parent to the child.

"It's really moving because the inmates will sometimes ad lib and talk directly to their kids," said Rice, recalling one inmate reading the Dr. Seuss book, "Oh, The Places You'll Go!" "Almost every page he would call his child by name and there's one part that talks about going off the path and he turned to the camera and said, 'Just like daddy; daddy's off the path right now, but I'm getting back. If you ever go off the path, you'll get back, too.' It was really powerful."

Each semester, more than 25 SRU students participate in the program in some way, whether it's organizing a book drive, raising money or processing the video, but only a few go into the prison. Adia Achtzehn, a sophomore early childhood-special education major from Pittsburgh, joined Rice for a visit to the Butler prison last spring after taking an interest in how to help children caught in this development, even though it is through video communication.

"I care a lot about child development and I know having a relationship with a parent is so important," said Achtzehn, who had to go through a day of training and background checks before participating. "They might not understand where their parent is or why they are there, but we're helping fill that gap. That's the best part of it for me."

Knowing Rice's upbringing of having an incarcerated parent who suffered from mental illness and drug addiction, Del Vecchio asked her to speak on a panel, "The American Prison: The New Mental Institution," as part of the Student Nonprofit Alliance's programming, which raised awareness and addressed issues related to mental illness.

At the time, Del Vecchio asked Rice a simple question, "What could someone have done to help you?"

"I had never thought about it at that point and I was floored by the question," Rice said.

Del Vecchio jumped in with an answer of her own, suggesting a reading program similar to one that she remembered a former SRU social work professor, Herman Jones, mentioning years earlier from the Allegheny County Prison called "Daddy, Read to Me."

In turn, Rice mobilized her political science students and Del Vecchio's nonprofit management students the following semester. She also posted an Amazon wish list to her Facebook page that in one hour received enough donated books to start the program.

Each semester since spring 2015, SRU's "Read to Me" program has visited the Butler County Prison at least once, each time working with 15-20 inmates and their families. However, twice as many new books are needed because some inmates have multiple children and having a variety of selections to choose from increases the likelihood of a book striking a chord with an inmate.

"The most powerful moment is when you see someone who is incarcerated, for any number of reasons and many for violent offenses, and in minutes they are taken back to their childhood when life was maybe not as complicated or things hadn't gotten as rough for them," Del Vecchio said. "And then for the 15 minutes, when they are reading the book to their child, they are not an inmate, they are somebody's dad. That's also a powerful experience for the volunteers to recognize that we might be doing something through literacy to connect the child with the parent. Maybe the child makes better choices and when the parent gets out of prison the child can't wait for the parent to come home.

"It's much more than being about books and going to the jail. It's about how literacy can keep those parents connected to their child so when they come home that connection is still as solid as possible."

"Read to Me" organizers received a thank-you note from the parent of an inmate who said her grandson watched the DVD at least 50 times in one weekend.

"That tells you how eager kids are to stay connected to their parents and how easy this is (to help them)," Del Vecchio said. "If people don't have the time to do the training and to volunteer, they can help in another way by providing a book, because if we don't have the books we can't do the project."

Monetary donations can be made through the SRU Foundation by clicking here. Additionally, people can purchase a children's book through an Amazon wish list by clicking here and the book will be shipped directly to the organizers. Used books cannot be accepted.

More volunteers are also getting involved. This semester, Kerry Edwards, assistant professor of criminology and criminal justice, is joining the program with students from the Criminology Club at SRU. There are also plans to expand the program through a similar method to connect nursing home residents with their grandchildren or great-grandchildren who may not live near them.