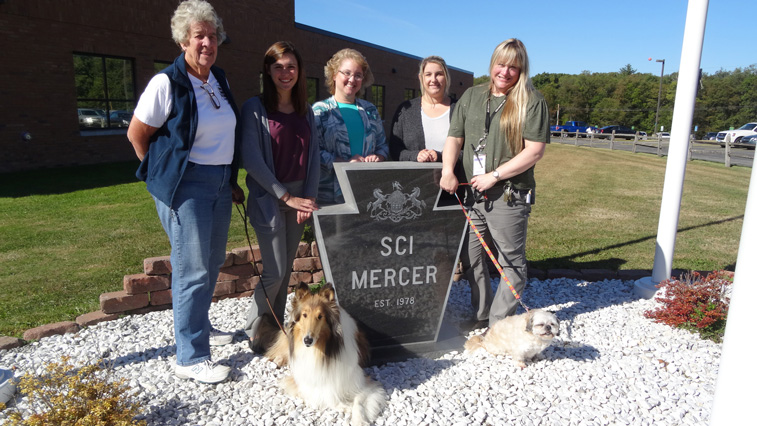 SLIPPERY ROCK, Pa. - A group from Slippery Rock University is taking a four-legged approach to intervention and research regarding anxiety and stress-related disorders in the inmate population.

As part of an animal-assisted stress/anxiety group, two SRU students and a professor are helping inmates at the State Correctional Institute in Mercer by including dogs in their therapy sessions with as many as 30 incarcerated males.

Yvonne Eaton-Stull, assistant professor of social work, conducted her doctoral research in animal-assisted intervention and teaches a class on the subject. Along with Cynthia Wright, SCI-Mercer's psychology manager, Eaton-Stull helped launch the project, the first of its kind at the prison, and invited two of her students who have had specialized training to facilitate the group.

"The dogs give the inmates something to put their focus on," said Maura Vulakovich, a junior social work major from Imperial who is one of the student facilitators. "If they are talking about a hard topic, it's easier for them to be sitting there petting the collie and looking at the collie instead of us, who just asked them this intense question."

Now in their seventh week, the therapy sessions take place in a supervised area of the prison once a week with 10 inmates who have been diagnosed with anxiety and cleared for this type of interaction. Two more groups of 10 inmates each will meet in successive 10-week periods through May.

The group is made up of Wright, Eaton-Stull, at least one SRU student facilitator, Sue Anderson, a 1966 SRU alumna and therapy dog handler from "Paws Hand Delivered," and, of course, the licensed therapy dogs: two Shih Tzu's named Pookie and Ginger, a collie named Danny and a Cavalier King Charles spaniel named Murphy.

"(The inmates) almost turned into different people when the dogs walked in," said Cassandra Spirnock, a sophomore social work major from Valencia and a

student facilitator. "Their personalities just change completely. They give them treats. They just love them."

"It's interesting to see them wanting the dogs' attention," Vulakovich said. "They don't vie for anyone's attention, but as soon as a dog is there, they want that attention. They understand that when you pet a dog, you calm down; there's no judgment there. They've come to know that we're not judging them either, but it's way more dramatic to see with the dog."

The goal of the intervention group is to reduce inmates' stress and increase their ability to cope. Unlike service animals, which provide functional assistance and sometimes protect their owners in crowds, therapy dogs accelerate social interaction and ease people with stress or anxiety into conversations that may create tension.

"We integrate the dogs into the discussions so we often start with a safer topic like talking about the dog," Eaton-Stull said. "It's a safer way to get them talking about the topic for the day and transition to them."

"It's easier for them to relate it to the dogs and say, 'Oh, I kind of do that myself,'" said Spirnock, providing an example of a discussion the group had about identifying stress and how the inmates respond, such as when a dog's leash is pulled.

While animal-assisted therapy has been used in nursing homes and at mental health treatment facilities, the program has not gained much traction in prisons because it not only requires buy-in from administrators, but extensive clearances for researchers and participants and overcoming negative perceptions working with the incarcerated.

"It's a growing area of interest, but there's not a lot of research to be able to back it up," Vulakovich said. "A lot of people are hesitant because of the stigma that comes with it. You have to have the right people (who are progressive) in a facility."

In addition to providing a service to the inmates, the SRU group is conducting research, with pre- and post-test evaluations, in hopes that it can show the

"I'm excited to be involved with a project where it's not just straight research but (the students) are doing an intervention," said Eaton-Stull, who anticipates the group submitting their research for a peer-reviewed journal or a national conference next year. "And I couldn't ask for more reliable students; they are doing a fantastic job."

Vulakovich plans to get her master's degree in forensic social work and work for the FBI, while Spirnock plans to practice animal-assisted therapy in her chosen career field of social work.

"We learn things in class but you don't actually see it until you go and do it," Spirnock said. "Now, I'm seeing and doing it and realizing how beneficial it is and how much it makes a difference in your practice."