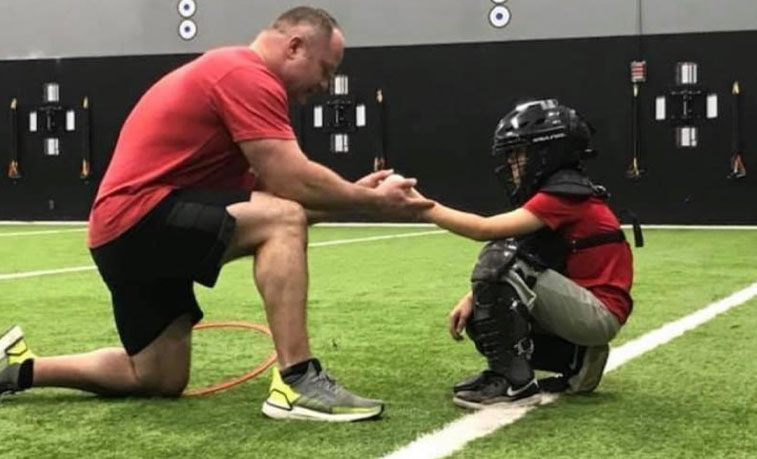 Chad Miller, a 2002 Slippery Rock University graduate with a degree in sport management, works with players as part of his sports performance practice. Miller is the founder of the Louisville Slugger Hitting Science Center that will open in January 2022.

SLIPPERY ROCK, Pa. — There is so much data and science that go into hitting a baseball that a batting cage can now be considered a laboratory. Players can improve by analyzing swing paths, monitoring neurological reactions and selecting the perfect bat, just to name a few. And the person with just the right experience to stitch baseball and science together is Chad Miller, a 2002 Slippery Rock University graduate with a degree in sport management. He is the founder of the newly created Louisville Slugger Hitting Science Center in Louisville, Kentucky.

The center, which will open in January 2022, will be a place where exercise scientists use advanced technology to analyze a player's swing and reaction time to design custom training programs to become better hitters. Clients will include everyone from youths developing after they learned the game to professional big leaguers. 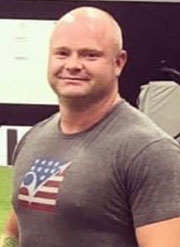 Miller is not just in the middle, he's a rare expert on both sides. That's why a company like Louisville Slugger, makers of the official bat of Major League Baseball, approached him to lead its new venture.

Miller, who played baseball at SRU and coached collegiately earlier in his career, has worked for a variety of companies in medical device sales and orthopedics. He then founded Peak, a neuromonitoring company, in Louisville, and became a partner in Norton Sports Performance, a medically integrated baseball facility.

Through his experience with Norton, he was approached by Kevin Uhrhan, who works directly with major leaguers as the Louisville Slugger Manager for Professional Baseball.

"He said that they really want to get into scientific bat-fitting," Miller said. "They want to have a medically integrated approach to, No. 1, fitting their guys with better bats, but on the flip side of that, they also want to help their guys perform better, both mentally and physically, from neurocognitive and nutritional perspective, so that they can become a true partner with their players."

Earlier this year, Louisville Slugger announced a new sponsorship with Norton Sports Performance for the opening of a diagnostic and analytic swing lab for baseball and fastpitch softball players. Miller will oversee operations of the 26,000-square-foot training facility located in the Norton Sports Health Performance & Wellness Center in Louisville.

"Our mission is to become the gold standard in baseball and fastpitch softball education and instruction," Miller said. "We will have an authentic baseball laboratory using the latest technology to help players fine-tune their game through measurable analytics like neuro response times and other important neurological and physical factors. Numbers don't lie, so we can identify specifically what each player needs to work on and then create individualized programs to help those athletes improve."

The facility will have a bat-fitting lab that will be used by Louisville Slugger bat experts to provide guidance and support to amateur, college, minor and major league baseball players on selecting bat models best suited for them, including barrel size, handle and knob style, length, weight distribution and, for those using wood bats, the specific species of wood. The proximity of the lab to the Louisville Slugger wood bat factory will allow players to fit their new bats and make adjustments on the same day.

"Pro players have always selected bats based on feel," Uhrhan said. "Feel will remain part of it, but now we'll be able to take the data from each hitter's analysis and help them narrow down to the bat models and specifications that will help them have the most success."

The LSHSC will offer training service packages for professional baseball players, but the center will mainly offer academies and individual training programs for amateurs as well. Additionally, LSHSC organizers plan to offer a hitting coach certification program and a series of hitting science camps and clinics across the country.

SRU head baseball coach Jeff Messer, who is a former president of the American Baseball Coaches Association, the governing body of amateur baseball, has worked with Miller in recent years, paying close attention to the emergence of analytics and diagnostics in baseball coaching.

"The field of analytics and biomechanics in baseball is exploding right now," Messer said. "There are a lot of people who can look at the data and say you need to do (something), but they don't give you a reason why you're doing it, or maybe they don't have a background in baseball. Chad can do both and he has baseball background. This is his passion and he's never made a living completely off baseball before, but he will now.

"Once he gets something in his mind, he doesn't stop going, and I know he'll be successful. He's already successful, but this is one of his ventures that I think he probably will enjoy more than anything that he's done before."

A native of Knox, Miller played at The Rock from 1999-2001 before starting a coaching career as an assistant at Marshall University and later, Penn State-Beaver.

"My goal was to be a coach (in the top Division I conferences) by the time I was 35, but I found I was really good at medical device sales," Miller said, who moved to Kentucky and worked for several medical products companies beginning in 2004. "When I was coaching, I actually enjoyed practices more than I did games. I just absolutely love player development and identifying the causality of injuries and programming to prevent injury and help players succeed."

His interested in both medical device sales and sports performance led to him founding Peak Neuromonitoring in 2014, a company that now includes Peak Sports Diagnostics, which specializes in diagnostic technologies that analyze neurocognitive function, physical performance, nutrition and optimization for all athletes, not just baseball players.

He continues to draw from his experience at SRU, both as a player learning from Messer and as a student in the sport management program led by Brian Crow, professor of sport management and department chair. Miller not only retained knowledge but also his competitive spirit that has served him well during his career.

"I brag about Coach Messer and Dr. Crow on a weekly basis," Miller said. "The education I received (at SRU) was second to none and it's been an absolute blessing for me to go to school there. I go toe-to-toe every day with people who have Ivy League backgrounds in our neuromonitoring space, and I can tell you that my education from SRU prepared me to not only compete with them but also beat them."