SRU takes stock of its ticker on device’s anniversary 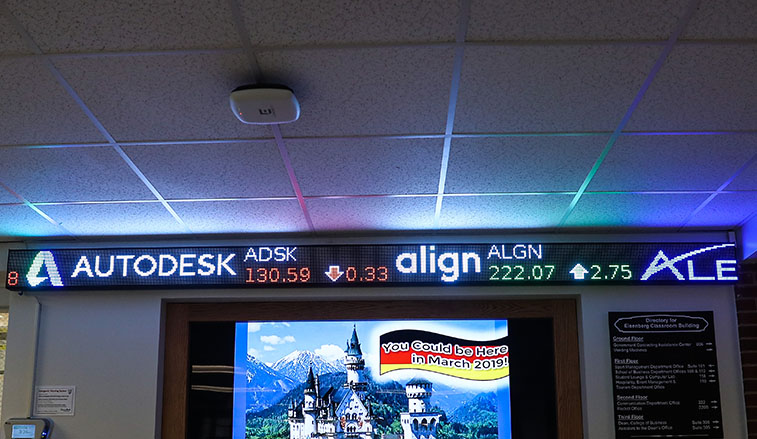 SLIPPERY ROCK, Pa. - When students at Slippery Rock University enter the Eisenberg Classroom Building they are greeted with two large digital displays, one of which has been around for exactly 151 years. OK, so SRU's stock market ticker was installed just 10 months ago, but the first-ever stock ticker made its debut, Nov. 15, 1867, in New York City.

SRU's 12-foot, LED stock ticker, with scrolling financial stock quotes from the New York Stock Exchange, Nasdaq and other markets, accompanies a separate 85-inch screen that displays news, campus announcements and information submitted from faculty in the College of Business.

"The digital displays really liven up the place," said Lawrence Shao, dean of the College of Business, which is housed in ECB. "You're able to see financial activity and stay current. We're living in an instantaneous world and students want to know what's going on now; this is certainly the type of equipment that provides that immediate response of market activity."

Before Edward Calahan invented the stock ticker in 1867, configuring a telegraph machine to print quotes on streams of paper, information from the NYSE was sent by mail or messengers. Mechanical stock tickers were developed through the 1960s before giving way to computerized tickers and electronic displays that are used today.

Rise Vision, a digital signage company, began developing electronic stock tickers for companies in 1992 and later for hundreds of universities, including the one installed at SRU.

"(The ticker) make investors more aware of activity and it provides topics of discussion when you see stocks going up or down," Shao said. "Then you'll want to go out and research it further and find out why a stock is jumping. It can provide a treasure trove of information."

Rise Vision touts its products as a component to trading labs that prepare "thousands of business students with the hands-on tools necessary to enter the financial workforce right out of college."

SRU recently completed a feasibility analysis to add a trading lab on the first floor of ECB where a current computer lab is located. The 1,200-square-foot lab would provide seating for 30 and include at least 12 Bloomberg Terminals, which are computer software systems that provide real-time financial market data on an electronic trading platform that can be used by SRU business classes in investing, portfolio management and accounting.

Only about 345 colleges and universities in the U.S. have trading labs, and Shao said that committing to such technology and facilities will also benefit SRU in the COB's accreditation process.

For now, the stock ticker in the ECB lobby will offer a steady sampling of what's to come, and a reminder how far the ticker has evolved in the last 151 years.