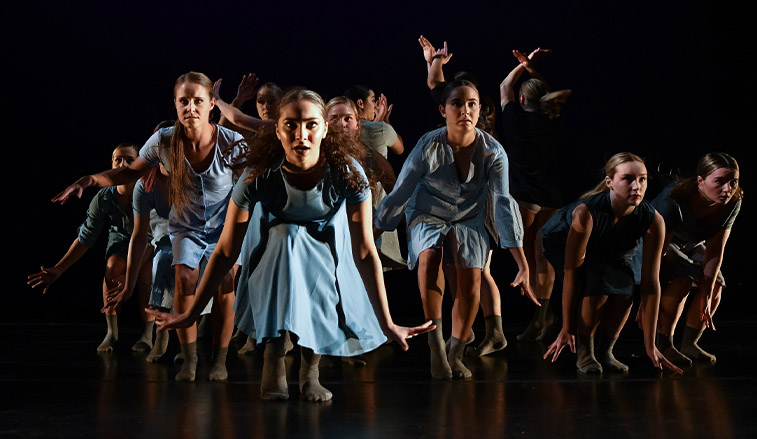 The Emerging Choreographers Student Concert, formerly known as the Winter Concert, is being conducted virtually this year because of the COVID-19 pandemic. The name change, according to Lindsay Viatori, an assistant professor of dance and the concert's artistic director, was made to "more appropriately represent what the concert is and what it features."

"The concert, just like before, is a really wonderful program highlighting the creative research of our students," said Viatori. "It is a platform for students who have completed prerequisite courses to hone their choreographic skills, to explore new concepts outside of the classroom setting, and to look at the ways they want to work in the field of dance.

"This concert particularly showcases the strong work of choreographers who have deeply developed, refined and edited their pieces; these really are final projects for these students."

Performances for the show were selected based on auditions. Initially, junior and senior student choreographers submitted letters of intent and, if accepted to move forward in the process, audition other students to participate in their pieces. Group works are limited to six students or fewer, including the choreographer, to ensure social distancing could be maintained in rehearsal areas.

While this year's event will occur virtually due to the COVID-19 pandemic, students will showcase their work through prerecorded segments during the concert.

"The dancers really rose to the occasion as some haven't worked with the combination of dance and technology before," said Viatori. "We are lucky to have someone like Jennifer Keller (SRU professor of dance) who specializes in dance technology, and through coursework, students have been given the means to not only reimagine their work through film, but to also reimagine what the field of dance can be."

One performance will include Bates' "EyeSeaBliss," a gestural modern dance piece adapted to film in collaboration with Hoglund, who served as the cinematographer and editor, and Chase Uram, a senior music major from Renfrew, who assisted with choreography and music. The dance will be based off an unpublished poem that Bates wrote, reflecting on their feelings of contentment and happiness from their own lived experiences.

"I was thinking a lot about contentment versus happiness and what to keep in life," said Bates. "Happiness comes and goes, but contemptment sustains you through those ups and downs of life. It was all those different feelings and images, especially associated with happiness, that drove a lot of the movements and gestures in the performance."

Admission for the livestream is $4 and available via e-tickets.