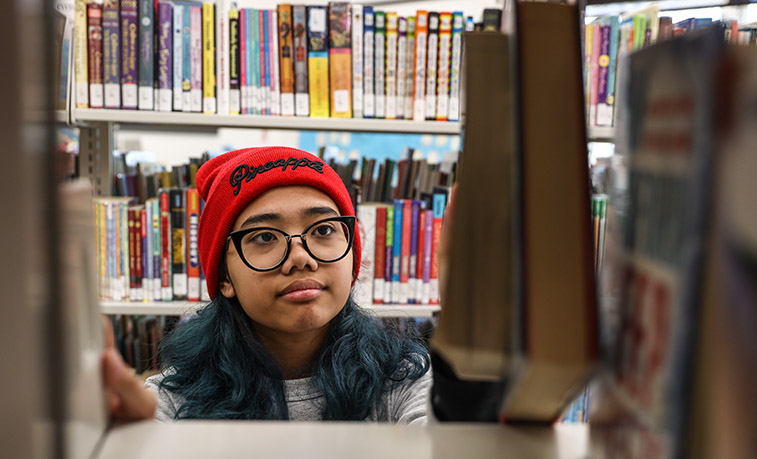 (Editor's note: This is the first in a series of articles introducing students from Slippery Rock University's inaugural Bonner Leader class.)

SLIPPERY ROCK, Pa. — Elli Manalang grew up as a "third-culture kid," a term used to describe a person raised in a culture different from their parents' native culture, or in a place different from their passport country. Although her passport has several stamps confirming her status as a "third-culture kid," the first time Manalang's passport was stamped in the United States, she made her way to visit Slippery Rock University.

Now, after enrolling at SRU, Manalang is continuing to cover new ground as one of five freshmen in the Bonner Leader Program. Bonner students receive a scholarship and are paid to lead a community-service partnership for the University.

A world citizen, Manalang is reluctant to answer the question, "Where are you from?," when people make her acquaintance.

"That's a hard question; the first thing I say is 'I'm from the Philippines but I lived in the Middle East for 14 years,'" said Manalang, an English literature major who came to SRU from Dubai, United Arab Emirates. "That's the shortest way to put it, but it doesn't fully encompass who I am or what I've been through. I grew up outside of my passport country for so long that I've adapted into these different cultures and it's hard to separate (any of them) in my head.

"Because I grew up in so many cultures, I can't keep up with pop culture from all these different places," she said. After spending her first few months in the U.S., she's still learning the vernacular, like "slippy," a regional colloquialism for "slippery," and customs, like pumpkin carving in the fall, something she said she's only seen in movies, as well as "how so many people (in the U.S.) put ranch dressing on everything," she said with a laugh. One piece of slang she's already mastered -- she refers to her Timberland boots as her "Tims," just like most college students do.

Born in her parent's native country of the Philippines, Manalang and her family speak Kapampangan, one of several regional languages of the Philippines, although Manalang often answers her parents in English. When she was 4 years old, her family moved when her father took a job in Bahrain, an island country in the Persian Gulf. Manalang attended a Filipino school in Bahrain and, other than at church, she mainly associated with Filipino people. A decade later her family moved to Dubai where she attended international schools with British curriculum, and most of her classmates were white and English. Dubai is a densely populated, multicultural city that is regarded as the business hub of the Middle East.

"I found it hard to fit in with the other students because I had come from such a different place," said Manalang, who, since moving to Dubai, speaks primarily English. "I could barely find another person who looked like me. It was isolating because I talked differently and looked differently and it just put this barrier between me and others."

Although only about 15% of Dubai's 3.1 million population are comprised of UAE nationals, Filipinos accounted for just 3% of expatriates. Most expatriates in Dubai are Indian and Pakistani.

Manalang first learned about SRU at a college fair in Dubai, where she met Sierra Bell, SRU's international recruiter. Manalang liked the opportunities for English majors at SRU, such as study-abroad programs and the chance to work on student-run publications like SLAB and The Roxy.

"I didn't think about moving to a specific country," Manalang said. "I just wanted to go to a good university, and out of all the universities, SRU was the best pick."

It wasn't until after Manalang was accepted at SRU that the University launched the Bonner Leader Program. SRU joined an exclusive network of 64 institutions in the U.S. to adopt the Bonner Foundation's civic engagement and scholarship model. The Bonner Foundation oversees the network to ensure that institutions are expressing the organization's "common commitments" of civic engagement, community building, diversity, international perspective, social justice, spiritual exploration and wellness.

Bonner Leaders at SRU receive $5,000 in financial support each year for four years, including a $3,000 scholarship and $2,000 earned through their work in the community. They must commit at least 10 hours per week during the academic year to leading a partnership with a community organization while maintaining a minimum 2.5 GPA.

"The reason why I was first interested in the Bonner Program is because of financial aid; it can be expensive for international students to attend college in the U.S," Manalang said. "But then I saw the opportunities for community service, leadership, civic engagement and social justice, and that's what pulled me in further."

Manalang applied for the program and was interviewed by SRU's 10-member Bonner Program Advisory Committee via videoconference. The BPAC, which consists of SRU faculty and staff, Bonner Program staff and student coordinators and a community member, chose Manalang and four other first-year students from among nearly 50 applicants to represent the first cohort. Subsequent cohorts will include 10 students per year. Once the program is operating at full capacity there will be 40 students in the program.

"We aspire all of our Bonner Leaders to have or be able to develop traits that include civic leadership, a diverse perspective and a passion to effect change related to social issues and the larger community," said Sami Laurence, SRU's Bonner Program developer. "The qualifications for the program are consistent with the Bonner Foundation's common commitments. Through their lived experiences, diversity and desire to learn, our first cohort meets these qualifications and they are certainly positioned to lead the way in developing partnerships with the community and setting a precedent for future Bonner students who enter the program."

During their first semester, Bonner Leaders rotate working at three service locations in the community every four weeks: the Slippery Rock Community Library, the Macoskey Center for Sustainability Education and Research and Don't Stop Dreamin', a foundation of Quality Life Services based in Butler that helps nursing home, rehab and personal care residents in western Pennsylvania. In spring 2020, the Bonner Leaders will be designed as the leader of a community partnership and work to build capacity for more SRU volunteers and resources. By their fourth year in the program, their focus will shift to community action and scholarship.

Manalang, like each of her fellow Bonner Leaders, brings a unique perspective to her civic engagement, particularly her worldview on social issues after growing up as a third-culture kid.

"I mostly want to make a point that people who are different and in the minority aren't that different from other people and we all deserve to be treated the same," Manalang said. "I consider myself aware of various social issues and I try to educate myself, so my long-term goal is to narrow down my issue passions and make a difference in the community."

To learn more about the BLP at SRU, including information for students applying for the 2020-21 academic year, click here.