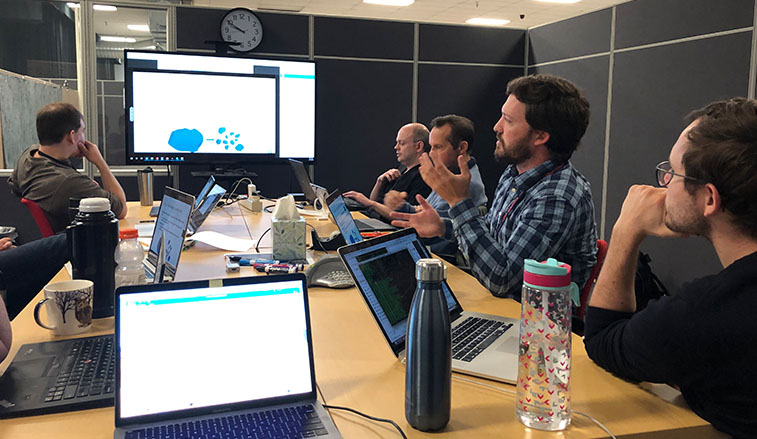 Fourth from left, Andrew Ryan, a staff scientist at the Lunar and Planetary Laboratory at University of Arizona, meets with fellow members of the OSIRIS-REx mission team that is helping to bring back an asteroid sample to Earth. Ryan is a 2011 Slippery Rock University graduate and Pittsburgh native. Photo courtesy of Beth Clark.

SLIPPERY ROCK, Pa. — As Slippery Rock University graduates depart the western Pennsylvania campus and enter the workforce, the education they've earned can stretch from one side of the globe to the other. And for one SRU alumnus, his work is taking his acquired knowledge even further - try 200 million miles into space on the surface of an asteroid.

Andrew Ryan, a 2011 SRU graduate with a degree in environmental geoscience, is a staff scientist at the University of Arizona Lunar and Planetary Laboratory who is part of the OSIRIS-REx mission, which stands for Origins, Spectral Interpretation, Resource Identification, Security, Regolith Explorer. Scientists at the Arizona lab are working with NASA to study and collect a sample from a near-Earth asteroid named Bennu, which is nearly on the same orbit of the sun as Earth, and in recent years it has been between 30 million and 210 million miles away.

The mission is significant for many reasons. OSIRIS-REx is the first NASA mission to bring an asteroid sample back to Earth, and, because Bennu is a primitive, carbon-rich asteroid that has not significantly changed since it was formed nearly 4.5 billion years ago, the organic molecules on its surface might provide answers to the history of our solar system and the origins of life on Earth. 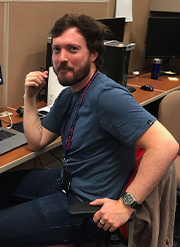 "We think that maybe these organic molecules could have been the ingredients that led to life on Earth," Ryan said. "Organic molecules are the building blocks that carbon-based life forms are made of, and there's been long-standing questions of 'Where did the organics come from?' and 'Did they form on Earth?' or 'Did they form in space and then they were brought to Earth by asteroid impacts while the Earth was forming?'"

There's no threat that Bennu hitting the Earth could end life as we know it, despite the mission website describing Bennu as the most "potentially hazardous asteroid" with a "relatively high probability of impacting the Earth." In fact, scientists estimate there's only a 1-in-2,700 chance of Bennu impacting Earth, and even then not until the late 22nd century. And, with a diameter of 500 meters, the resulting damage would be only a large crater versus an apocalyptic event.

The duration of the OSIRIS-REx mission is seven years, from September 2016 when a spacecraft about the size of a car was launched from an Atlas V 411 rocket in Cape Canaveral, Florida, to September 2023, when a drop capsule containing the sample will land via parachute in Utah. OSIRIS-REx reached Bennu, Oct. 20, 2020, performing a "touch-and-go" maneuver on the surface for six breathtaking seconds to capture at least a 60-gram sample of rocks, which is about the size of a candy bar.

"We thought there was going to be enough surface areas on the asteroid that were covered with sand and pebble-sized particles, not just boulders," Ryan said. "The sample acquisition device was designed with this in mind. As we got closer, we realized that those areas were extremely rare and small and nearly the entire surface of the asteroid was a boulder field. That's not what we expected based on the thermal analysis we did before the mission, so we had a challenge to collect the samples."

Ryan said that using a claw to collect the sample would not work, in case there was sand, but also if the boulders were too large to grab or bring back.

"Part of the challenge is designing other mechanisms when you don't exactly know what's going to be on the surface," Ryan said. "The other part is, as with anything that goes into space, the fewer moving parts you can have, the better."

They were left with what Ryan said looks like a cylindrical air filter that works in reverse to collect particles.

"(The sample acquisition device) touches the surface and shoots out nitrogen gas, which kicks up the material and it flies into the collector," Ryan said. "When it happened, it looked like it exploded with particles. We really thought we stuffed it full, and then we backed away and realized that it was so full that some of the flaps that were supposed to close didn't because there were rocks coming out of the openings and small particles were starting to leak out. The mission management and planners decided, based on visuals of the head, that this thing was filled to the gills. They estimate, by visual confirmation, that we got at least 400 grams, maybe more. The bottom line was that we definitely got more than 60 grams. Mission accomplished."

But Ryan wasn't high-fiving relieved colleagues in a mission control room on Oct. 20. His role on the OSIRIS-REx mission team involved analyzing data, developing computer thermal models, learning about the asteroid and choosing a sample site.

"The actual sample TAG event was really a job for the navigation team, the mission planners, TAG engineers, and senior management," Ryan said. "So actually, I've been watching (it unfold) just like everyone else."

Well, almost everyone. Ryan was in France at the time of the sample collection because three days earlier, he married his wife, Margaux, who is a nurse in Nice, France, where Ryan was a postdoctoral researcher from 2018-19. 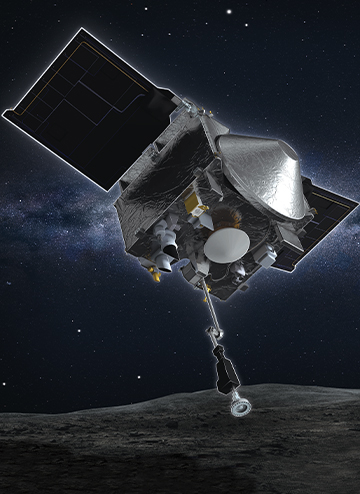 "It happened around midnight in France, and my wife fell asleep; she didn't make it," Ryan said with a laugh. "But I stayed up and I was watching on my laptop; it was really exciting."

A mission of OSIRIS-REx's scale requires hundreds of contributors for its duration, from building and testing the spacecraft and its instruments to modeling and analyzing data. Space missions can be run through a NASA research center, such as the Jet Propulsion Laboratory, but some, like OSIRIS-REx, originate from a university professor serving as principal investigator with a team of scientists and engineers proposing their mission as partners with NASA.

Ryan may be one of hundreds of people all over the world who played a role with the OSIRIS-REx mission, but he's one of only five staff scientists on the University of Arizona team of 42 faculty, scientists, graduate students, post-doctoral researchers and support staff led by principal investigator Dante Lauretta, professor of planetary science and cosmochemistry.

Ryan's career path to joining the OSIRIS-REx team began as an SRU undergraduate. A native of Pittsburgh's North Hills, Ryan attended SRU where his father, William, was an associate professor of exercise and rehabilitative sciences, but Ryan was interested in environmental sciences, and eventually planetary sciences. He interned at two NASA space centers, first at Johnson Space Center in Houston, Texas, after his sophomore year and then the following two summers at Goddard Space Flight Center in Greenbelt, Maryland.

"It's all started when I was at SRU," Ryan said. "I found that I could take the things that I was learning about the Earth, geology, the climate -- all these things in environmental science -- and I could take that knowledge and use that to investigate the surfaces of other planets, which I thought was just so cool."

After SRU, Ryan attended Arizona State University where he earned master's and doctoral degrees in geological sciences. There he worked with Philip Christensen, a regents' professor of geological sciences in the ASU School of Earth and Space Exploration, on a laboratory experiment to study the thermal properties of the materials that researchers expected to find on the asteroid surface. The experiment was later proposed to Lauretta and the OSIRIS-REx team at UA. The proposal was accepted and in 2015 Ryan joined the mission team as a student collaborator.

ASU scientists and engineers collaborated with the OSIRIS-REx team to develop an instrument called the OSIRIS-REx Thermal Emission Spectrometer, known as OTES, which was designed for the OSIRIS-REx mission to measure the temperate and spectral properties on the surface of Bennu using a sophisticated thermometer, called a "Michelson interferometer."

Ryan continued to work closely with the mission once the spacecraft was launched in 2016. After he and his father, who by then had retired from SRU, went to Cape Canaveral to watch the launch, Ryan served as an instrument operator for the spacecraft's first lap around the sun. Then, after graduating from ASU in 2017, he accepted a postdoctoral research position in Nice, France, at Observatoire de la Côte d'Azur, studying computer thermal models that were related to analyzing heat glow on asteroids. In February 2019, he returned to Arizona, only this time at UA, again working with the OSIRIS-REx team, first as a post-doc working closely with the OTES instrument. Now, a staff scientist, Ryan is transitioning to a role where he will be analyzing the asteroid sample when it comes back Earth in September 2023.

"That analysis will include the thermal properties like thermal conductivity, heat capacity, diffusivity and some of the physical properties, such as hardness," Ryan said. "I've been really focusing my efforts on developing this plan.

"A lot of people might think, 'Oh, that's really a long time off,' but I'm going to need that time to get everything ready. I welcome the challenge and I think it's going to be really fun to figure out how we're going to get some of these measurements done, because a lot of the measurement techniques that I'm looking into are usually done with very large samples that are not rare, like cement or concrete."

The sample from Bennu will also be much different than a meteorite that lands on Earth because it is coming back in its purest form. Based on thermal analyses, Ryan anticipates the sample to be "very weak and crumbly," which, if it were to fall to Earth without a drop capsule, would not survive atmospheric entry from space. 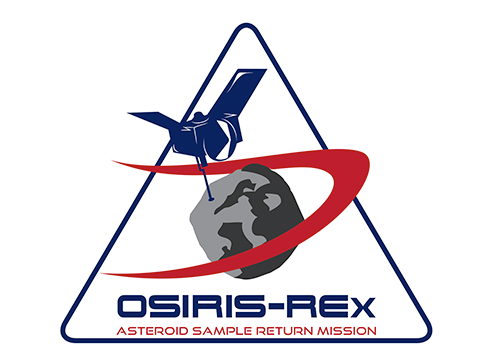 "When a meteorite lands on Earth's surface, it immediately starts chemically reacting with the water in the atmosphere and it's going to be altered," Ryan said. "It would be hard to tell what was actually on it versus what came from Earth."

What came from "The Rock," however, is not in question: Ryan's education and the belief that he could pursue the career he loves.

"I was really happy with my time at SRU," Ryan said. "There's a lot of outstanding teachers there and they really care about their students and their current and future success. The education was really strong because you get a lot of attention from professors, whereas, if I had gone to a bigger research school, I might have not always gotten the same experience, and personalized attention, from professors who are instead focused on their research. I still try to keep in touch with my professors because I felt like I was able to create some really good relationships."

One such professor was Krishna Mukherjee, assistant professor of physics and engineering, who Ryan said really pushed him to pursue his current career path.

"Andrew had a thirst to understand the mysteries of the universe," Mukherjee said. "It started with baby steps, like presenting a poster (at SRU's Symposium for Student Research, Scholarship, and Creative Activity) for his Honors Astronomy class, doing an independent study in exoplanets or taking extra physics classes to solidify his knowledge. All of these are examples that we encourage our SRU students to follow.

"It is so gratifying to know that a student from 'The Rock' is now analyzing a space rock. (His faculty) knew he would be a great ambassador for SRU, whether here on Earth or beyond in outer space."