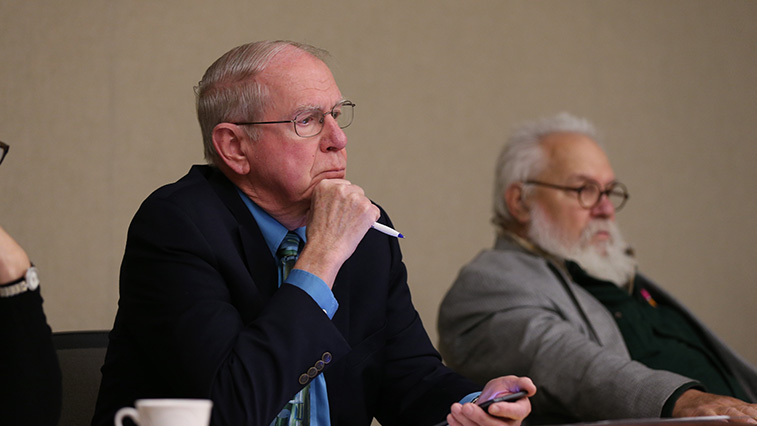 Bill McCarrier, Slippery Rock University trustee and chair of the council of trustees, listens to a public comment during the Nov. 20 meeting.

SLIPPERY ROCK, Pa. - The Slippery Rock University Council of Trustees today took another step forward in the process of selecting a new president for the University when they approved two replacement representatives for the Presidential Search Committee and agreed to solicit applications from interested individuals for an open at-large position to be selected at their Dec. 8 meeting.

The action was necessary due to resignations from the original search committee.

SRU's presidential search was extended at the University's Oct. 6 quarterly business meeting when the trustees failed to approve a motion to advance the names of two candidates - Bruce Murphy, president of Nicholls State University in Thibodaux, Louisiana and Amir Mohammadi, vice president for finance, administration and advancement services at SRU - to Pennsylvania's State System of Higher Education board of governors for consideration as SRU's 17th president.

Membership on the committee is prescribed by Pennsylvania's State System Board of Governors Policy Section 1983-13-A: Process for Recommending a Presidential Appointment. At this meeting, the Trustees considered the selection of individuals for the following positions on the Presidential Search Committee: a university executive; a non-instructional employee; and an at large member.

The Trustees elected Amanda Yale and Joan Allen to replace those persons that were resigned or unable to continue serving on the committee. These individuals will join the members named by the various stakeholder groups to round out the full Presidential Search Committee. Tina Renaud was selected as an alternate for the non-instructional position. The recommendations will now go to the interim chancellor for final approval.

If approved, the complete Presidential Search Committee would include:

In other action, the Trustees agreed to confer with the State System as to the filling of the third "At-large" member. In question is whether that spot can be filled by a member of an affiliated entity, such as persons associated with the Slippery Rock University Foundation, Inc., or only those persons directly connected to the University such as students, faculty and staff.

A decision as to who will fill the final "At-large" position will be voted on during the COT Dec. 8 quarterly business meeting.

"While it's disappointing that we didn't finalize the membership today in order to maximize our progress, we will get past this quickly and move onto the job of finding a new president for the University," said Jeff Smith, SRU trustee and chair of the Search Committee.