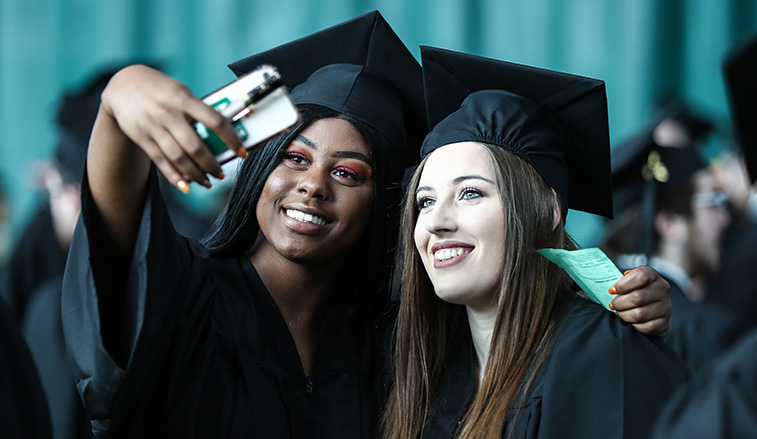 Tickets are required for admission with doors opening at 9:30 a.m. All graduates have received their allotted tickets for distribution to friends and family.

Larry McCarthy, assistant professor of accounting and assistant to the dean of the College of Business, is the University Grand Marshal. He has been a faculty member at SRU since 1985. He currently teaches accounting theory, nonprofit accounting, economics of social issues and accounting for mergers and acquisitions. His research interests include the impact of shale gas on Pennsylvania's economy and the availability and types of veterans services and support programs on American college campuses. He is a veteran of the U.S. Air Force, an SRU alumnus, and he earned his graduate degree from the University of Pittsburgh.

William Sigmund, professor of biology, will act as the faculty marshal. He received a bachelor's degree from Kent State University and a doctoral degree from Indiana University, Bloomington. He also serves as the University coordinator for the Pennsylvania Junior Academy of Science meeting at SRU.

SRU President William Behre will open the ceremony with welcome remarks, and Jeff Smith, chair of the SRU council of trustees, will bring greetings from the council.

Cynthia Shapira, chair of Pennsylvania's State System of Higher Education, will deliver the commencement address. Shapira is president of the David S. and Karen A. Shapira Foundation, leading the development and implementation of the foundation's philanthropic initiatives. She was appointed by former Gov. Tom Corbett to the Pennsylvania Commission on Women and served on Gov. Tom Wolf's Advisory Board on Education and Workforce Development. In 2017, she was honored as a Distinguished Daughter of Pennsylvania.

Shapira formerly served as executive vice president of Pappas Consulting Group and was a management consultant for 20 years, providing strategic management services to education and nonprofit institutions. She has a Bachelor of Arts degree in political science from Wellesley College and a Master of Public Administration degree from the Harvard University Kennedy School of Government.

She has chaired the PASSHE board of governors since 2016.

Lt. Col. Lillian Woodington, professor of military science and head of SRU's Army ROTC program, will confer the oath of office to Savannah Anderson, a senior political science major from Kane, and Matthew Montanaro, a senior homeland security major from Coraopolis, and induct them into the U.S. Army as second lieutenant.

SRU's Army ROTC unit will present the colors to open the ceremony.

Don Huddart, a 1987 SRU graduate and member of the SRU Alumni Association, will induct the graduates into the association.

The SRU Chamber Brass will provide music for the ceremony.

The SRU Men's Quartet will sing the "Star-Spangled Banner" and lead the singing of the "SRU Alma Mater."

Overflow seating for individuals who do not have tickets for the Field House is available at the Alumni House and the Advanced Technology and Science Hall Auditorium. The ceremony will be live streamed via the internet at www.sru.edu.

Additional information, including guest instructions, special needs seating, transportation, parking and lodging is available at http://www.sru.edu/events/commencement or by phoning 724.738.2849.