The collaborative, named for the 19th century social reformer, abolitionist, orator, writer and statesman, is committed to creating inclusive university communities and transformative connections among historically underrepresented students and faculty, as well as other communities across the Commonwealth and beyond. The FDIC exists across all 14 universities of Pennsylvania's State System of Higher Education.

After escaping from slavery in Maryland, Douglass (1818-1895), became a national leader of the abolitionist movement in Massachusetts and New York, gaining note for his dazzling oratory and incisive antislavery writings. He was described by abolitionists as a living counter-example to slaveholders' arguments that slaves lacked the intellectual capacity to function as independent, American citizens. 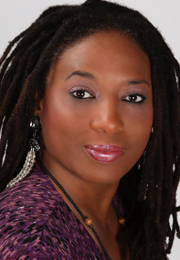 Payne, who has performed and led dance workshops around the U.S. and in Europe, Africa and Asia, said she is excited because the position aligns with her passion for the arts, diversity and student mentoring.

"My teaching and research experience have prepared me to work with a diverse group of students and faculty, build collaborative programs, aid in retaining students of color and enhance diversity programming," said Payne, a 1992 SRU graduate with a bachelor's degree in dance.

"My experiences as a guest artist/professor at numerous institutions, including historically black colleges and universities, has given me a greater awareness of the types of educational experiences students of color need to excel at SRU."

Payne's two-year tenure at the institute's helm will begin in the spring semester. The position carries with it three hours of reassigned workload each semester.

"Ursula is an excellent collaborator and I think she will do a wonderful job building relationships across campus," said Jennifer Keller, interim dean of the College of Liberal Arts.

The Frederick Douglass Institute is a collaborative that exists across the 14 universities of Pennsylvania's State System of Higher Education. It is the goal of the FDI to "move forward in the spirit of this great orator in an effort to ensure that his legacy lives on through the students of our partner campuses."

In leading SRU's institute, Payne's primary responsibilities are to organize and promote:

"I am prepared to engage, build relationships and collaborate with other programs on and off campus to help enhance the experience of all students at SRU," said Payne.

Payne is hopeful of going beyond the requirements of the directorship to create an interdisciplinary community action and social change minor offered in collaboration with the institute.

"This minor would include a service-learning and study-abroad component to increase participation of underrepresented minority populations in international initiatives," she said. "I would like to strengthen the commitment to diversity at SRU through securing larger grants from external agencies."

Payne, a New Castle native, said her worldview has been shaped by a lifetime of crossing geographical and cultural borders. Her parents taught for the New Castle School District, which is predominately white. Her only sibling, a brother, was born with a severe form of cerebral palsy that affected his body movement, muscle control and learning.

"My family history reveals the multiple realities of how race, disability, gender and class have operated within the diversity of my life experiences," Payne said. "As a third generation college graduate, I can think of specific examples of how my parents, grandfather and other family members' successful completion of college prepared me for my success as an undergraduate student, graduate student and professor."

After graduating from SRU, Payne received a master of fine arts degree in dance from The Ohio State University in 1995. In 1997, she became a certified movement analyst. She joined SRU as an assistant professor of dance in 1996 and was promoted to professor of dance in 2008. She has served as department chair since 2011. As chair, she helped to facilitate the approval of a SRU's bachelor of fine arts dance degree.

The efforts put forth by Payne and her dance colleagues helped the program to be ranked among the Top 20 dance programs in the nation by Dance-College.com

In 1995, she co-founded Mills and Payne Dance, a New York-based company. She co-founded and serves as administrator for Forge Summer Dance Intensive, a two-week training for both collegiate level and advanced youth dancers.

Payne has been an artist-in-residence at more than 20 universities, including the National Taiwan University of the Arts in Taipei, Taiwan. She has presented at more than 30 conferences around the world.

"Acquiring knowledge of other countries through travel and intensive study has enriched my scholarship, teaching, administrative and professional career," Payne said.