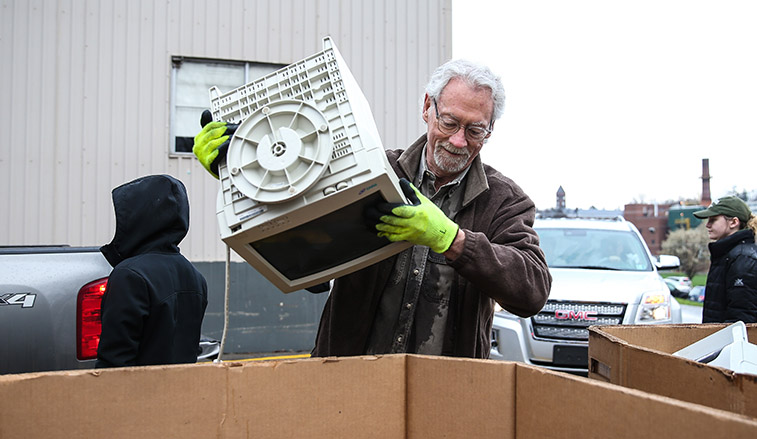 SLIPPERY ROCK, Pa. - With winter rearing its frigid head, Slippery Rock University students, faculty and staff have watched as the campus' rich green has given way to white snow. But despite the recent flurries, many departments at SRU are witnessing the budding of their own "leaves" as the University launches its Green Leaves Sustainable Department Certification Program.

"This is a self-certification program at the department level that is meant to really change the culture of the University one department at a time," said Paul Scanlon, SRU director of sustainability and co-chair of the President's Commission on Sustainability. "We're hoping every department jumps in and that it starts raising additional awareness for sustainability and climate change; little things we can all do to help." 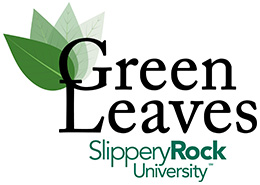 SRU is already recognized as a "green" institution by a number of organizations. The Rock was named to The Princeton Review's "2018 Guide to 399 Green Colleges;" the Sierra Club Cool Schools List ranked SRU 159th out of 273 colleges in the U.S.; and earlier this year the University ranked among the world's most environmentally friendly colleges and universities by the University of Indonesia's GreenMetric World University Rankings. SRU was ranked 20th in the United States and 142nd in the world.

The Green Leaves program at SRU is modeled after its counterpart that was originally launched at Harvard University two years ago. "We found (the Harvard program) online and thought it was a great model for us to emulate," said Scanlon. "We talked to Harvard staff and they gave us full permission to replicate the program. We then customized it according to the needs of our campus and community due to variables including our recycling programs and available resources."

Initiatives include activities such as recycling electronics, repurposing old furniture, programming smaller appliances to shut off with a timer when not in use, providing healthy food options at meetings and events, hosting lunch-and-learn sessions on sustainability and more.

"(Earned leaves) represent how much departments are growing as contributors towards having a more sustainable environment," said Nick Donovan, a senior dual major in public relations and professional Spanish and a SEA ambassador from South Park.

The SRU program has been in development for the last two years and, at present, has participation commitments from Bailey Library and the Parks, Conservation and Recreational Therapy Department.

"I knew it would be a great program and I knew the library would do well with it because we have so many opportunities to live more sustainably and I think it's especially important because the library is one of the bigger departments with 20 staff members," said Allison Brungard, SRU STEM librarian. Brungard is also a member of the President's Commission on Sustainability and the library's sustainability committee. "When the library got involved, we spent a lot of time during the summer taking stock of what we were already doing and what we could be doing and that's what pushed us to participate. We were surprised how quickly we got to level one, based off of things we were already doing. We quickly implemented other changes to earn our second leaf too.

"The idea of the program is that even if you are just starting out small, it can make a big difference. It's not like you get into this program and right away have to do all these big things, rather, you set goals and just keep growing."

So far, the program has made strides.

To date, the library staff has eliminated all desktop printers and is reusing cover sheet paper.

"Unless an area needs a printer for confidentiality or they need to print forms for ordering, we got rid of them. It was surprising how many people were okay with them being eliminated and how it has helped to reduce waste," said Jennifer Bartek, manager of library operations.

"With printed cover sheets, once a box has accumulated from student printing, we send it to the SGA Preschool and Childcare Center where it is used as scrap and drawing paper. We also shred some of that paper for the Humane Animal Rescue Wildlife Center in Verona which uses it for bedding for the animals."

"This is the stuff that people don't really see when it comes to reusing materials, especially with the animal bedding, it's such a cool thing," said Brungard.

In addition to the program helping to change the infrastructure at SRU, it also works to change the behaviors of those involved. "We've done so much in our buildings to conserve energy that we're trying to turn that attention into behavioral change," said Scanlon. "It's an ongoing process about behaviors and practice, not just one-and-done. They go hand in hand.

"We've brought up introducing more long-term ideas such as incorporating bike racks onto campus so that maybe more people would be inclined to ride their bikes to class rather than driving their car."