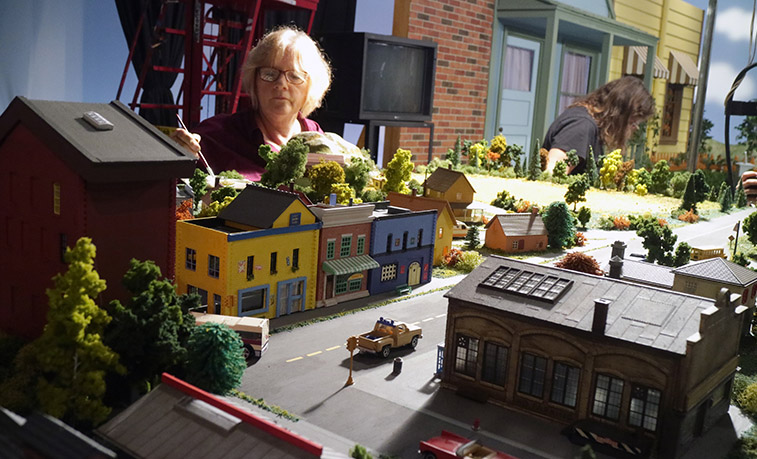 June Edwards, a Slippery Rock University professor emerita of art, helped create miniatures that were featured in the recently released movie, “A Beautiful Day in the Neighborhood.”

SLIPPERY ROCK, Pa. — After retiring in 2017 following 15 years as a member of the Slippery Rock University faculty, you might think that June Edwards would want to take a breather. You'd be wrong. Instead, she turned her attention to rebuilding a community ... a miniature one housed inside a movie studio. Edwards was one of the people who helped take the television show "Mister Rogers' Neighborhood" from the small screen to the silver screen for the movie "A Beautiful Day in the Neighborhood."

Edwards, SRU professor emerita of art, spent nearly two months in Pittsburgh last fall creating and painting props for the movie, which was released Nov. 22. The movie depicts the late Fred Rogers of the popular children's television show, "Mister Rogers' Neighborhood," with Tom Hanks in the role of Rogers.

"The whole philosophy of Fred Rogers is so important," said Edwards, a Pittsburgh native who retired from SRU in 2017. "He's made such a difference for Pittsburgh and for children everywhere. It was exciting to work on the props and I love the work I was able to do. The crew on this movie was so creative." 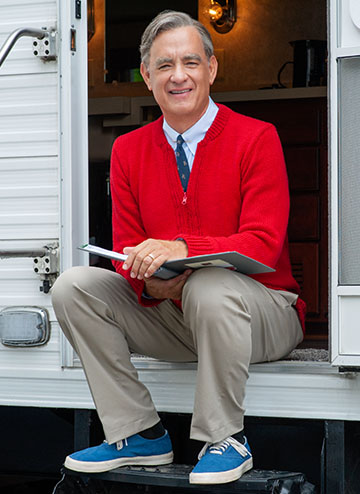 The movie provided Edwards with yet another chance to visit Mister Rogers' neighborhood, having helped to restore various props from the original show that were used for a display at the Fred Rogers Productions facility in Pittsburgh in 2013. The show, which aired from 1962-2001, was originally produced by WQED, the public television station in Pittsburgh, before gaining a national following on PBS when it debut there in 1968.

None of Edwards' previous work was as regular or extensive as the movie project, as she worked four or five days a week for more than seven hours a day for 34 days total. Edwards was tasked with replicating the neighborhood miniatures from the original television show. To do so, she took measurements of the original models, conducted color tests for paint matching and referenced old photographs.

Edwards and one other designer built and painted more than 30 miniature structures, not including landscaping and vehicles. Some of the structures were adapted from model kits while others had to be built from scratch with various materials including plastic, basswood, balsa wood and illustration board. Other crews working with miniatures recreated the show's iconic trolley, as well as miniatures of the cities of Pittsburgh and New York City and other landmarks and locations.

"It's all precision (work)," said Edwards, who also worked closely with Paula Payne, a scenic artist from the original television show. "We'd use houses and structures from different kits to form one building. Some would have brick or stone already cast in or we'd have to draw them on. How it's painted is critical so that it matched (the original). You want to make it exactly the same."

The size of the structures varied, but they were all based on HO scale, a common scale of 1/87 that is used for model train sets. The largest structure was eight inches high with most doorways less than an inch tall.

Edwards didn't mind the long work days. She was on faculty at SRU from 2002-17, as the graphic design instructor, teaching courses in everything from graphic design and digital media to painting. She had previously spent 15 years as a graphic designer for commercial businesses in New York City.

Edwards prefers to measure her career not by 15-year job stints or by days on a movie set, but by creating and painting props.

"Working on this (project) was really rewarding and meaningful," Edwards said. "It was wonderful. It was fun for me; it's an excellent movie and we're all really excited that's finally out in theaters."