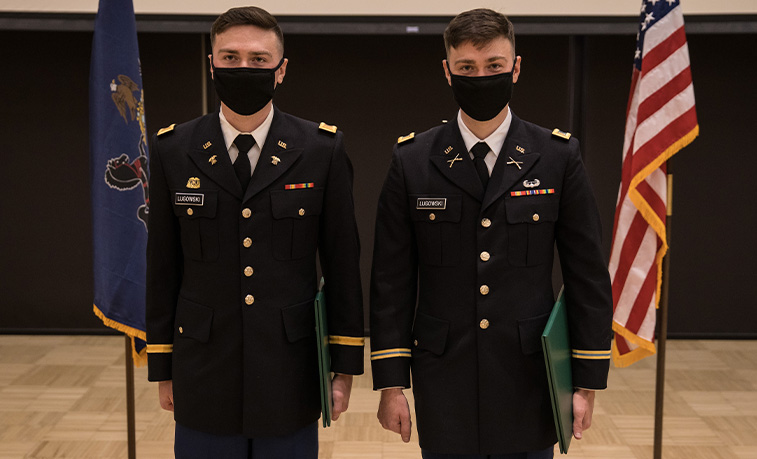 From left, Matthew and Michael Lugowski officially become commissioned officers in the U.S. Army at a ceremony Dec. 2 after they completed their four years as cadets in Slippery Rock University ROTC program.

SLIPPERY ROCK, Pa. — By looking at Matthew and Michael Lugowski, the identical twins are difficult to tell apart, but to them it will be difficult to imagine being apart after they followed almost identical paths to Slippery Rock University as U.S. Army ROTC cadets.

Matthew and Michael Lugowski, natives of Crescent, recently finished their degrees from SRU in psychology and political science, respectively. Before going their separate ways as Army officers, the brothers were together on campus one last time, Dec. 3 in the Smith Student Center Ballroom, as the SRU Army ROTC hosted a private Commissioning Ceremony during which the Lugowskis officially became officers with the rank of second lieutenant. 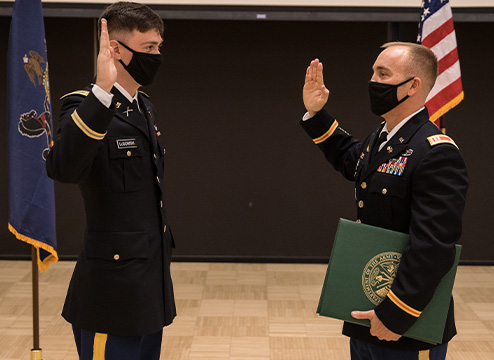 Michael Lugowski is administered his oath by Capt. Adam Readout

"It's nice having someone there with you all the time all throughout life," Matthew said. "For the first time in our lives really, we're going to be (seen as) individuals. It's going to be different for sure."

"We're going to miss each other," Michael said. "But hopefully it's not going to be too bad."

Four years ago, the brothers enlisted into the Army National Guard together during a ceremony at the Military Entrance Processing Station in Pittsburgh, so it was fitting they were commissioned alongside one another at SRU.

"It's nice that we're able to do this at the same time as well," Michael said. "We're glad we could have it in person and have a small group of family and friends from the program see us through to the next chapter of our lives."

The spring 2020 class of graduating cadets commissioned over Zoom videoconference because of safety measures resulting from the COVID-19 pandemic, but with the Lugowski brothers being the only two to be commissioned after the fall 2020 semester, the cadre was able to conduct the ceremony in person with all attendees wearing masks and adhering to physical distancing protocols.

"Other than wearing masks and limiting the crowd, we were able to do everything the same as we typically would," said Lt. Col. Jennifer Martin, professor of military science and head of SRU's ROTC program. "Everything was set up the same as far as delivering the oath, the first salute and the pinning of the bars by family members."

Capt. Adam Readout, assistant professor of military science, read the oath to both Matthew and Michael, swearing each of them in as officers. The oath must be read by a commissioned officer or warrant officer.

Completing the commissioning ceremony was the first salute, a tradition between a non-commissioned officer who has influenced the newly commissioned officer. The NCO is called to post and salutes the new officer, who returns the gesture. Both Matthew and Michael chose Tom Powner, who served 30 years in the U.S. Air Force, retiring as a chief master sergeant. Powner, formerly of Ambridge and a current Virginia Beach resident, is a family friend who the brothers consider a grandfatherly figure. 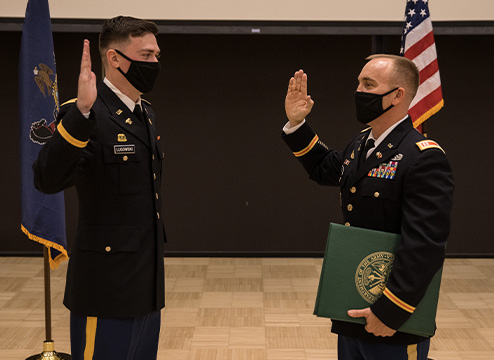 Matthew Lugowski is administered his oath by Capt. Adam Readout

After the Lugowski brothers officially become SRU graduates following the University's virtual Commencement Ceremony, Dec. 12, they will prepare for their next military assignments.

Matthew will report for active duty starting with training at the U.S. Army Quartermaster School in Fort Lee, Virginia, beginning in March. From there, he will be assigned a duty station and serve at least four years.

Michael will report to his duty station, the National Guard 1st Battalion, 112th Infantry Regiment in Cambridge Springs. He will serve at least six years as an infantry officer, starting as a platoon leader of 35-40 soldiers operating the Stryker combat support vehicles.

Matthew and Michael said graduate school could potentially be in their futures but for now they are relieved and grateful for completing their undergraduate degrees at SRU.

"I definitely became a lot more outgoing at SRU because when I first came here I didn't really talk to too many people outside of (my brother and a few people we knew from high school)," Michael said. "We developed a lot of relationships and it was nice to see myself grow as a person."

"I've grown in perspective, thinking outside of just me and starting to think of others more and wanting to learn more and gain more knowledge," Matthew said. "Anything that I'm involved in, I want to know more so that I can help others, because others helped me as well."

The helpful nature and wanting to know as much as they can is consistent for both Lugowski brothers, as identified by the SRU cadre.