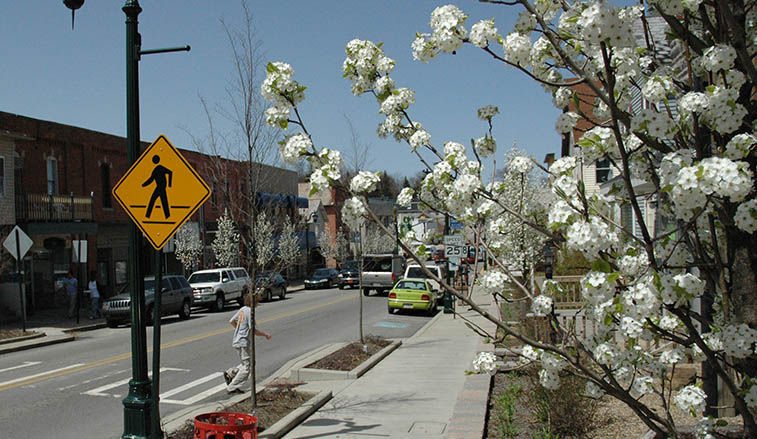 A group from Slippery Rock University is looking to remove and replace Cleveland Select pear trees along Main Street in Slippery Rock that have been affected by fire blight, a contagious pathogen that has rendered the trees’ leaves brown and withered.

SLIPPERY ROCK, Pa. - If a streetlight burns out, the bulb is replaced. But what happens if a similar thing happens to the trees that line a borough's thoroughfare? A group from Slippery Rock University wants to remove and replace the flowering trees that can no longer illuminate Slippery Rock's Main Street with hues of green and white.

Luke Gregory, a senior biology major from Murrysville, is leading a campaign called "Fight the Blight" to address a problem facing 57 Cleveland Select flowering pear trees in Slippery Rock. Most of the pear trees are compromised by fire blight, a contagious pathogen that has rendered the trees' leaves brown and withered, appearing as if that they have been burnt. 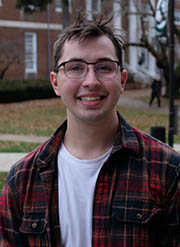 "Plants don't complain," Gregory said. "Trees are often overlooked so people have to look out for them. This fire blight has swept through and infected a lot of them (along Main Street), so we're trying to remove the trees that have it and plant a greater diversity of trees."

The goal of the project is to remove the infected pear trees and replace them with new species, such as Kousa dogwoods, redbuds and Washington Hawthorns, while increasing the variety of species near Main Street, like hornbeams, ivory silks, Linden trees, Prospector elms and royal burgundy flowering cherry trees.

"The diversity of trees helps with resiliency," Gregory said. "An infection can wipe out a whole population in one season. Also, the trees we're choosing to plant are heartier and able to resist things like salt pushed up from treated roads."

"If you have 100 trees and 15 are impacted by blight, you only need to replace the 15 with something else as opposed to replacing 100," said David Krayesky, SRU associate professor of biology, who has a background in arboriculture. "It helps financially and it helps with the aesthetics. The trees are going to bloom at slightly different times."

According to Gregory, the Cleveland Selects' snow-white blossoms typically appear for a few weeks in April. More than two-thirds of all trees in downtown Slippery Rock are Cleveland Selects, but the Fight the Blight project aims to diversify the tree population by raising the funds to purchase and plant approximately 50 new trees, with a price tag of between $10,000 and $20,000.

Krayesky and Gregory received approval from Slippery Rock Borough to execute the project; now they just need to secure the funding, with an initial goal of $7,000 to begin the endeavor as early as spring 2019. The Slippery Rock University Foundation Inc. has agreed to match all donations, up to $5,000, received through a Flight the Blight crowd-funding site Gregory and Krayesky have set up. The University has already planted two redbud trees in planters on University property along Main Street.

According to Krayesky, the Cleveland Selects were planted about 20 years ago by Slippery Rock Development, Inc., a non-profit community organization, but the fire blight has been present for at least a decade. Krayesky, an SRD board member and the organization's urban forester, has attempted to secure funding from private and government agencies, but many grants require student involvement as training opportunities.

That's where Gregory comes in. The Flight the Blight project is part of Gregory's Leadership Practicum course. He already helped 22 SRU students obtain Tree Tender certification after they took a day-long course earlier this fall offered by the Pennsylvania Department of Conservation and Natural Resources' Bureau of Forestry, in partnership with the Penn State University Extension Office.

"It's important to have the tree certification taught to underclassmen," said Gregory, who as a Tree Tender knows how to properly prune and water trees, which is critical in the first two years after they are planted. "It's all fine if we can plant trees but if no one maintains them, they won't reach their potential."

Improper pruning is one of the reasons fire blight spreads. In addition to spreading by wind and rain from diseased to healthy plants, the bacteria can be transmitted by pruning tools that are not properly sanitized after being used on infected trees.

Krayesky developed a management plan and has connected with volunteers from the community, but students like Gregory have built momentum for the project.

"He's got a lot of initiative and he's a hard worker," said Krayesky, noting Gregory's interest in local government and pursuing a graduate degree in plant biology. "Those are the type of people we need in the future, people who are interested in taking care of their community."

"The people who are part of the community will see (the benefits) every day, especially the small businesses," Gregory said. "When I moved to Slippery Rock the first view I had was making that turn on Main Street and that first view shouldn't be lined with trees that are in decline. Healthy trees beautify the community."