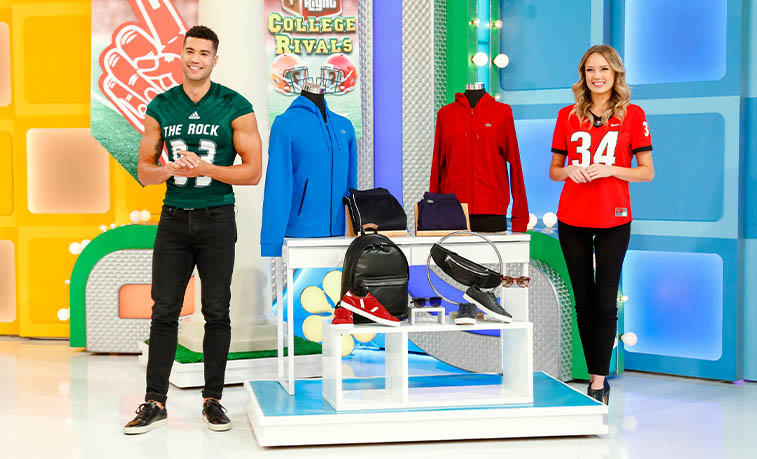 SLIPPERY ROCK, Pa. — Devin Goda caught a lot of passes as a football player at Slippery Rock University, enough to catch a few looks from NFL scouts. Now he's getting looks from millions as a professional model for some of the world's most recognizable brands. Goda, a 2011 SRU graduate, is only the third permanent male model in the 50-year history of "The Price is Right."

On the field, Goda had to develop chemistry with only one quarterback. On set, he has to do the same, but with multiple people and multiple cameras.

"You have to be on point," Goda said. "On our show there's probably about 10 cameras on the set and you have to be ready. I never really realized how detailed this job would be. It's helped me prepare for other things (in my career) that I'd like to get into, with acting and understanding camera angles."

Goda's path to The Price is Right stage was a lot more involved than running down the aisle after hearing "Come on down!" At SRU, Goda decided to give modeling a try between football practices and taking classes as a safety management major. His first agency, the Pittsburgh-based Talent Group, got him work for regional and local companies, including Dick's Sporting Goods. 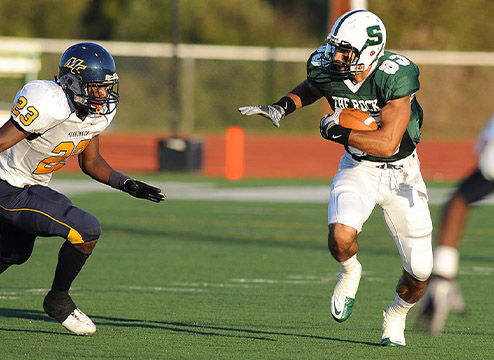 Goda, listed as a 6-foot-3, 225-pound receiver on the SRU roster during his senior year in 2011, is one of the most prolific pass-catchers in school history. He finished his career at The Rock ranked second in school history for career receptions (173) and receiving yards (2,259), marks that currently rank fifth all-time.

"Devin wasn't one of those guys who'd come into the room and pound his chest and say 'look at me,'" said George Mihalik, former SRU football coach. "He was a low-key guy and he just did his job and he was committed to the program and did everything that was asked of him. He was a very talented wide receiver and dominated many of our football games."

Goda signed as a free agent with NFL's Baltimore Ravens in 2012, but found himself buried on depth chart below the likes of Anquan Boldin, Jacoby Jones and Torrey Smith on a team that would go on to win the Super Bowl that season.

After he was cut during training camp, Goda tried out for several other teams, including the Green Bay Packers and Dallas Cowboys, but ultimately chose to further develop his modeling background and pursue it as a career.

Mihalik said he'd often joke with Goda about forgetting his football career to become a model so that Mihalik could be his manager.

"He was like a lot of guys who wanted to play in the NFL," Mihalik said. "But not many also had a modeling career they could fall back on, let alone a good career in safety management with his SRU education."

"I was ready to transition to something else and I never thought I'd transition to this career (as a model), but that's what God chose for me," said Goda, who signed with the modeling agency, Wilhelmina Models, in 2013. "I sent my information to agencies in New York, and Wilhelmina picked me up right away and I've been with them since. I've been one of their top-five men's models. It's been a good ride and hopefully it keeps going."

Goda has appeared in national campaigns for American Eagle, Macy's, Under Armour, Calvin Klein and others. As an "Under Armour guy," Goda has been successful enough to focus on fewer brands and carve out a niche as an active wear model.

A national modeling career may seem like a far cry from growing up in Forward Township, south of Pittsburgh. It was there where he worked on his grandparents' sheep farm, and first watched The Price is Right with his grandmother, Mary Goda.

After The Price is Right's first male, Rob Wilson, debuted in 2012, the show's producers decided to expand its cast of male models. That was Goda's opportunity. After three auditions, Goda landed a spot on the show in 2018 to his grandmother's delight.

"My grandma was a huge fan, and she was a big supporter of mine," said Goda of his grandmother who passed away in October 2022 at the age of 92. "We always watched it together. I knew what the show was about, but I didn't really fully understand it until I was actually on stage and see how crazy it is."

Crazy, for instance, is having contestants leap into his arms after they win a new car. As a model, Goda showcases the prizes up for grabs, which sometimes means live demonstrations, like running on a treadmill.

"I love the workout stuff and they let me do my own thing, whether that's the punching bag or a (basketball) hoop, or something that can I be athletic and have fun," Goda said. "The cars are fun but doing activities are my favorite."

In 2019, Goda had an opportunity to show off his No. 83 Rock football jersey for a "College Rivals" themed show in 2019. All the contestants and models wore their favorite college jerseys and apparel from schools like Texas, UCLA and Georgia. But it was The Rock that drew the most attention.

"That was really cool to wear, and I got a lot of great feedback," Goda said. "A lot of people who didn't know The Rock know about us now, so that was exciting."

"When I saw that I was filled with pride," Mihalik said. "Everybody knows The Price is Right and we're just so proud to see him on there. But what I'm most proud of is that he never forgot where he came from."

While revealing prizes on The Price is Right or showing off the latest Under Armour apparel may be exciting, it's the spotlight moments he had at SRU that still stick with Goda.

"Running out of the tunnel with the band playing every home game," said Goda about the pregame ritual when he and his teammates exited the locker room. "That was something that always gave me chills and to this day I always think about it."

Goda continues to split time living in Los Angeles and New York along with frequent trips to Baltimore to Under Armour's headquarters. Although he doesn't make it back to SRU as often as he would like, during a phone call last month he said he's always proud to represent and support his alma mater.

Mihalik, meanwhile, wonders what might have been if he followed through with his suggestions to be Goda's manager.

"I always told him, 'Let's forget this football thing and let's go to New York,'" Mihalik said. "I would still tease him and say that he didn't have that body for modeling until he came to The Rock. Give credit to Devin, but you see what the SRU strength and conditioning program can do from someone." 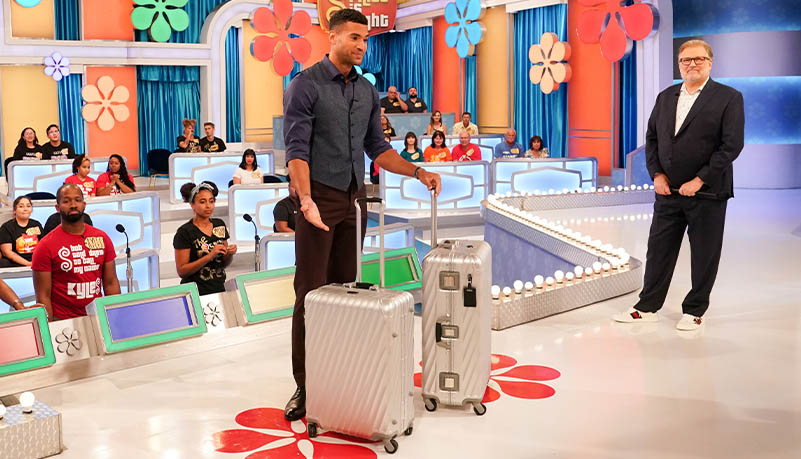 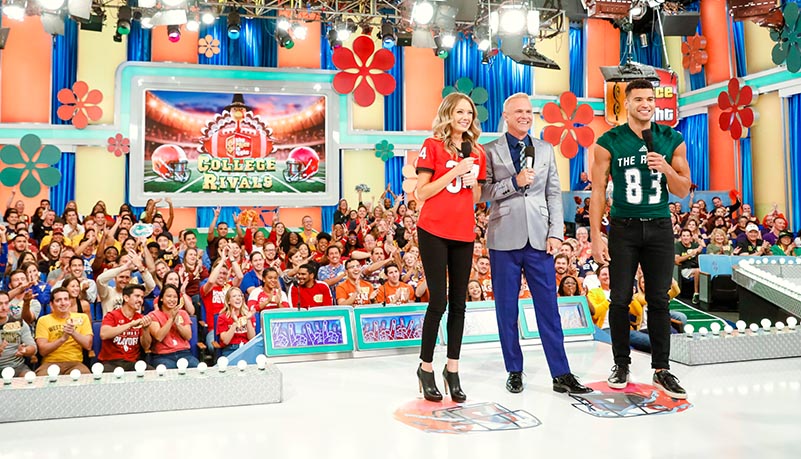 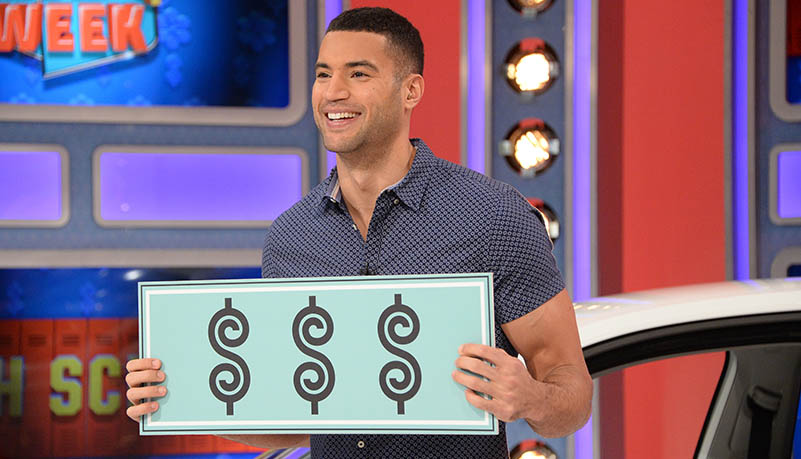 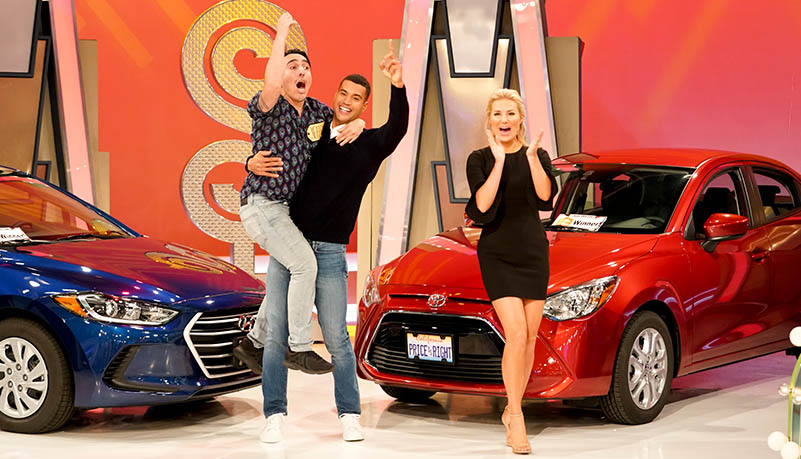