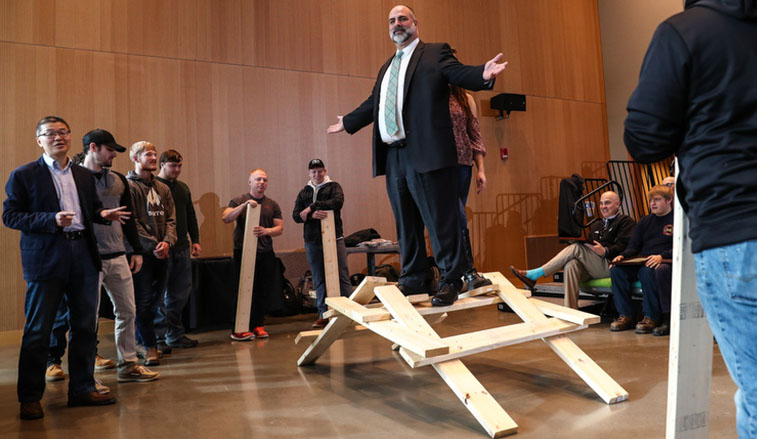 Slippery Rock University President William Behre stands on a da Vinci Bridge built by student from Steve Wei’s engineering class at the Dec. 7 council of trustees quarterly business meeting. The bridge was constructed using roughly 30 pieces of lumber, mostly two-by-sixes, and no ropes or nails, using a design made famous by Leonardo da Vinci in the late 15th century.

SLIPPERY ROCK, Pa. - Celebrating success and community service were the order of the day today at the quarterly meeting of the Slippery Rock University council of trustees. The council celebrated earning another excellent financial audit and presented commendations to six SRU students that serve the community as volunteer firefighters with the Slippery Rock Volunteer Fire Company and Rescue Unit; the SRU football team for its 2018 Pennsylvania State Athletic Conference West Division title; and Shawn Lutz, SRU head football coach, for his 2018 PSAC West Coach of the Year Award.

Noting that community service is part of the University's DNA, Jeff Smith, chair of the council, extended the University's appreciation for the leadership and commitment of the current SRU students serving on the SRVFD. Receiving commendations were:

Lewis is the first SRU student to take advantage of the SRVFD's live-in program, which provides participants housing at the station in exchange for four on-call duty periods each week. To learn more about Lewis and the program, click here.

The SRU football team, which posted a 9-2 regular-season record, captured the PSAC West title with an unblemished 7-0 mark. The Rock then earned the final playoff spot in NCAA Division II Super Region One and opened the playoffs by upsetting the No. 2 seed Long Island University Post and the No. 6 seed New Haven in the first two rounds, before bowing to Notre Dame College.

Lutz, is in his 23rd overall season at The Rock and his third as head coach, where he owns a 26-9 record after posting 7-4 and 8-3 records his first two years. Prior to that, he served four years as the associate head coach and eight as the defensive coordinator and defensive line coach. Lutz has been a member of the coaching staff for nine of SRU's PSAC West titles. He played tight end at West Virginia University, graduating in 1996, and earned a master's degree in sport management from SRU in 2003.

Trustees also viewed a demonstration from Steve Wei, professor of engineering, and a group of engineering students titled "The Power of Design: da Vinci Bridge Demonstration." Wei and his students - using roughly 30 pieces of lumber, mostly two-by-sixes, and no ropes or nails - constructed two small arch bridges and one large bridge using a design made famous by da Vinci in the late 15th century.

da Vinci first sketched the bridge in 1502 for Sultan Bajazet II, one of many proposed designs for a new bridge. But none of the Sultan's engineers believed it could be built. Rather than using a number of consecutive arches to hold the bridge up, da Vinci proposed using three separate arches, as big as the bridge itself, two leaning inwards on either side. The bridge features one arch supporting the bridge from below, with two more leaning inwards to distribute its weight to either side.

"This year's financial audit is one of the cleanest that I have ever witnessed during my 30-year career," said Amir Mohammadi, vice president of finance, administration affairs and advancement services. "The incredibly dedicated and hard work put forth by our finance and administrative personnel continues to make achieving this type of outcome a top priority."

Mary Hennessey, assistant to the provost, delivered an update on the University's 2021 reaffirmation of accreditation with the Middle States Commission on Higher Education.

The Middle States Commission on Higher Education is a voluntary, non-governmental, regional membership association that serves higher education institutions across five states, the District of Columbia, the Virgin Islands and Puerto Rico.

MSCHE's accreditation process ensures institutional accountability, self-appraisal, improvement and innovation through peer review and the rigorous application of standards within the context of institutional mission. MSCHE accreditation helps to assure students and the public of the educational quality of participating institutions.

"To maintain accreditation, the University must demonstrate that we meet minimum qualifications for accreditation," said Hennessey. "Those include being licensed to operate by the state; that we are operational with actively enrolled students; are in compliance with all federal and state laws; are mission appropriate; and have adequate financial resources."

The next phase the reaccreditation preparation process will include the design of a self-study that will gather evidence to ensure that SRU can address the requirements and standards set by the MSCHE; requirements of MSCHE affiliation including the University's governance structure; and the University's own chosen priorities.

"It's a very important part of the reaccreditation process for the University to involve the thoughts and opinions of all of our constituencies," said Philip Way, provost and vice president for academic and student affairs. "To that end, we've already created and disseminated a survey of institutional priorities to students, faculty and staff asking them select the top three initiatives - from a list of 10 - on which the University should focus. That list is based upon the institution's Mission Statement and Strategic Goals. Participants can also submit their own idea for an area of focus if they choose. We want people to focus on priorities in which innovation can be key or areas of improvement that could be addressed through innovative processes as we look to the future."

Trustees also received an update on the construction of the Performing Arts Center, which encompasses Miller Auditorium and East and West Gyms; and selected William McCarrier as the trustee representative to the Slippery Rock Student Government Association.

In other action, the trustees received updates on the Gail Rose Lodge and the President's Tent; an overview of advancement and foundation operations; reviewed the facilities and planning project list and approved compliance contracts, fixed assets, services and supply purchase orders. 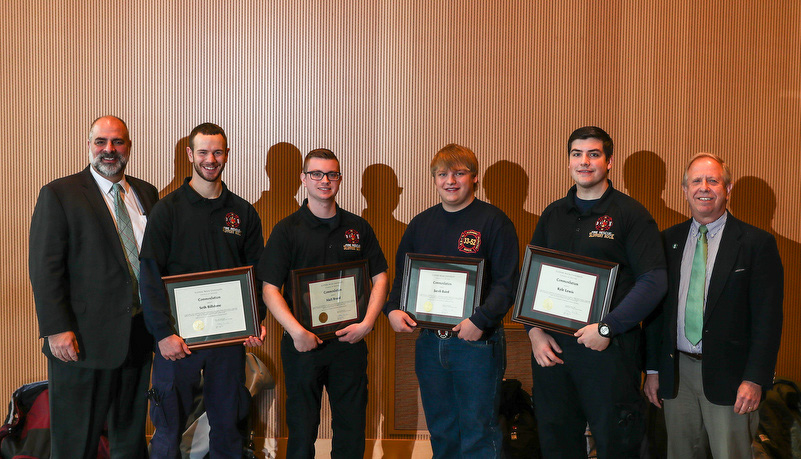 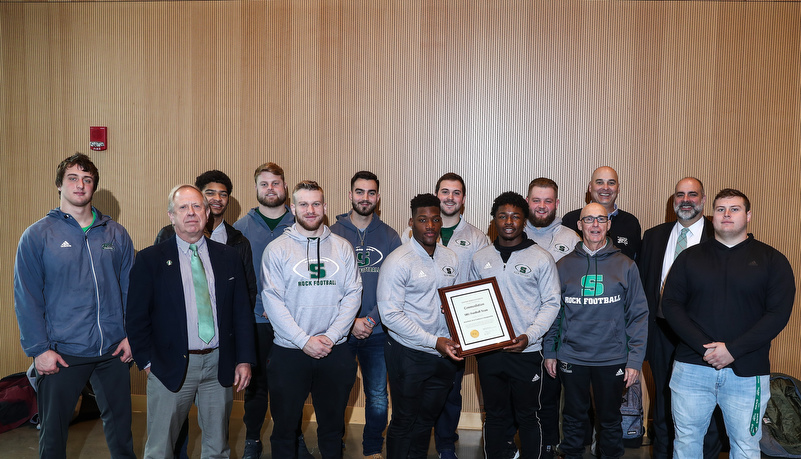 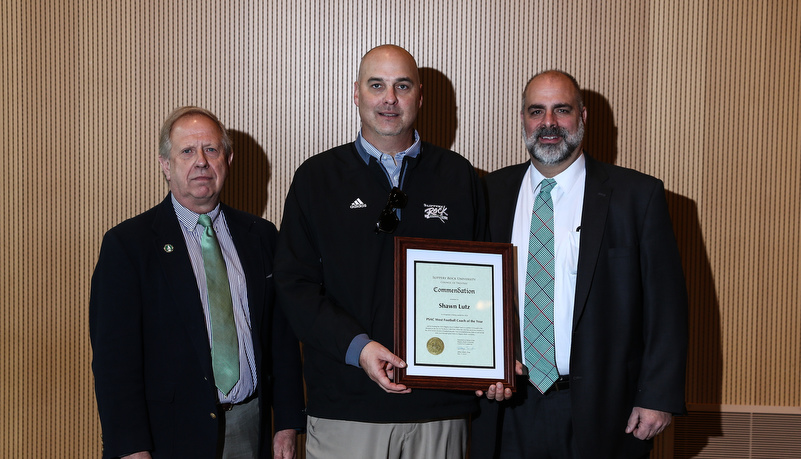