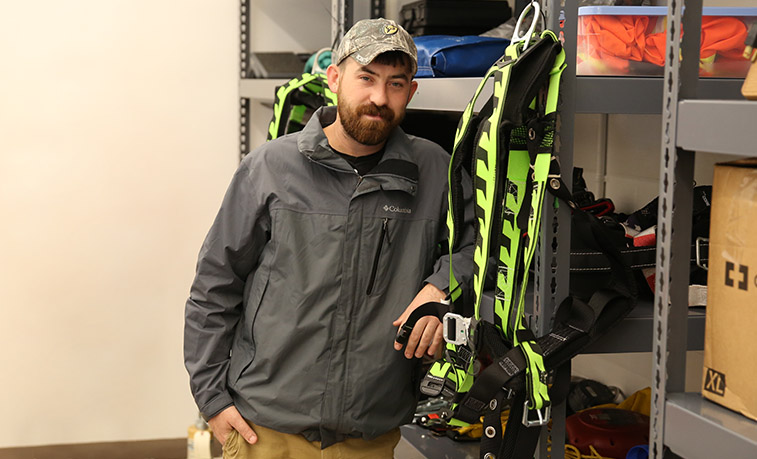 Devin Kays, 30, will graduate from Slippery Rock University Dec. 14 to honor his sister, Megan Kays, who passed away in 2013, while his two-month-old daughter, Harriet, awaits a heart transplant.

SLIPPERY ROCK, Pa. — As a U.S. Army veteran, Devin Kays knows about honoring a commitment. Having already completed his service in honor of his country, he's now honoring a promise he made to his family by graduating from Slippery Rock University.

Kays, a senior safety management major from Grove City, is unlike most of the 525 students receiving degrees at SRU's winter commencement ceremony, 11 a.m., Dec. 14, in the Morrow Field House. Kays, who is already employed and not seeking a new career, will receive his bachelor's degree to keep a promise he made when his sister, Megan Kays, passed away nearly seven years ago.

Megan Kays was fatally hit by a truck while jogging near her home in Pine Township Jan. 8, 2013, just a few weeks after graduating from Clarion University with a bachelor's degree in business marketing. She had planned to continue her education by pursuing a master's degree in health promotion. At the time of his sister's death, Devin Kays was stationed in Fort Bragg, North Carolina, completing six years of active duty.

"Graduating has been a dream of mine since my sister passed away and it's going to feel good to be able to achieve that in honor of her," said Kays, 30, who was a sergeant in the Army and enrolled at SRU in 2015. "Being older, I thought a college degree wasn't attainable because of everything life throws at you. Fortunately, I was able to accomplish my goal with the help of my professors and my family."

What life had to throw at Kays is unimaginable. In addition to being deployed to Iraq and Afghanistan for two years, and then having to cope with the loss of his only sibling, Kays encountered even more challenges leading up to his final semester at SRU. Kays and his fiancée, Caitlin Agostino, welcomed their first child, daughter Harriet, in October. Harriet was born with Hypoplastic Left Heart Syndrome, a severe congenital heart defect in which the left side of the heart is underdeveloped. Harriet had open-heart surgery to put stints and bands on her heart ventricles and was recently placed on a waitlist to receive a heart transplant.

Understandably, Kays considered putting his dream of a degree on a waitlist of its own.

"Some people told me I should take the semester off to just deal with things," said Kays. "But I decided to keep pushing forward to finish classes and graduate on time."

Kays, who also has a daughter, Xocial, 8, and a son, Hunter, 3, from previous relationships, continued working 50 hours per week as a sales manager at Pine Auto Sales in Grove City and attending classes at SRU on Tuesdays and Thursdays, all while making regular trips to Children's Hospital in Pittsburgh to be with Harriet. Agostino spends all her time in Pittsburgh close to Harriet while staying in the Ronald McDonald House near the hospital.

"(We have) a lot of doctor's visits and procedures," Kays said. "We either need a three-surgery process to fix the heart or do a total heart transplant. Right now, we're in between and the doctors are saying she needs to grow to see what direction we'll ultimately go."

Amid the hectic schedule of getting kids on the bus for school in the morning, going to work and classes in the day and visits to the hospital at night, Kays also closed on a new house in Grove City that the family will soon move into.

"I've had a lot going on," said Kays, who attributes his ability to handle tasks to his military experience. "Discipline-wise, I can get up early and stay up late; stay focused on certain tasks; and set a goal and be able to attain it.

"It was an easy transition from civilian to student. The professors (at SRU) understood that I was a nontraditional student and I have (challenges) outside of the classroom. They didn't offer leniency but they emailed me and offered extra help when I needed it."

Kays will be well supported at Saturday's commencement ceremony as his fiancée; daughter, Xocial; and parents, Jeff and Michelle Kays will be on hand. And while the person from whom he drew his inspiration, his sister, Megan Kays, will not be there in person, she will be with him in spirit as we walks across the stage to receive his degree.

"(Megan) was nice to absolutely everyone, even if they were mean to her," Kays said. "There was just this kindness she had that overpowered everything else. I'm glad I could do this for her."

Kays wants his sister's memory to live on beyond the ceremony and looks to his daughters to mimic their aunt throughout their lives.

"I hope that my daughters can emulate my sister and have the same work ethic and drive as she did," Kays said, before becoming more poignant, given Harriet's need for a transplant. "And her heart ... heart, definitely heart."