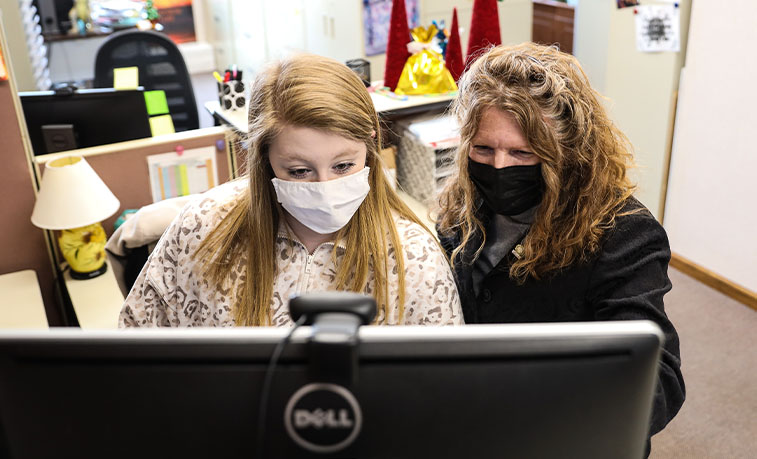 SLIPPERY ROCK, Pa. — Student employees at Slippery Rock University are getting a raise. The University approved an hourly wage increase to $8.50 per hour, effective Jan. 3, 2022, for non-contract, undergraduate students who were previously making less than $8.50 per hour. Additionally, SRU approved a new tiered system that will be implemented in March 2022, paying students up to $11 per hour for those who work in roles that require more advanced skills or responsibilities.

"Our students make valuable contributions to our campus in a variety of functional areas," said SRU President William Behre. "I am glad that we have found a way to pay them more than minimum wage. This is an important move to ensure that SRU remains a desirable place for our students to not only learn, but to gain work experiences and compensation that will help them to thrive."

Lauren Scott, a senior management major from Butler, works two jobs on campus, in SRU's Payroll and Student Employment Office and the Human Resources Office, for a total of about 12 hours per week. Before taking a job on campus last summer, Scott worked at a chain fast-food restaurant in Butler.

"The pay increase will help with my work and school balance," Scott said. "I won't have to overload myself with work hours because I'll be getting paid more. But also working on campus provides better opportunities because I get to work in the type of office (human resources) I'd like to work in after I graduate."

Scott said she was making more money at her previous, off-campus job, but the experience and convenience of working on campus outweighed the financial benefits. The upcoming pay increase will further solidify her job choice.

"Other students will benefit from this as well, and I think it's something they will be excited about," Scott said. "This also shows that the University is really appreciative of the student workers and what they do."

Prior to the start of the spring 2022 semester, departments who employ student workers will receive information from the Payroll Office explaining the new tier system with suggested levels for their positions. Departments will then be able to confirm or change the level and submit it for approval by the Payroll Office using the Handshake student employment online platform. Once approved, the student employee could see further pay increases based on the new tier system sometime in March.

The new pay structure does not include students working via graduate assistantship contracts. Graduate assistant compensation is currently being reviewed by a committee appointed by Behre.

For more information, contact the Payroll Office at 724.738.2069 or payroll@sru.edu, or search for student employment on Handshake.