SRU alumna named to Forbes 30 Under 30 list for sports 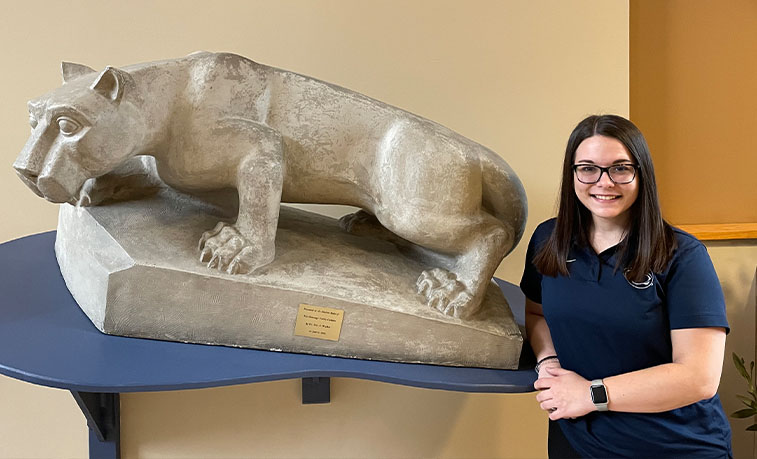 Amanda Howett, a 2018 Slippery Rock University graduate, may be wearing Penn State blue as athletic director at Penn State Shenango, but she credits a lot of her success, including being named to the Forbes 30 Under 30 list, to her time at SRU.

SLIPPERY ROCK, Pa. — Amanda Howett may have caught the attention of Forbes Magazine editors, but the Slippery Rock University alumna didn't immediately catch on when she was notified that she would be among next year's top 30 individuals under the age of 30 succeeding in the sports industry.

Howett, a 2018 SRU graduate with a degree in sport management, was named to the 2022 Forbes Magazine 30 Under 30 Sports list for North America, a designation that includes professional and Olympic athletes, as well as entrepreneurs and executives.

"I got an email from Forbes saying congratulations and here's the link and I thought it was spam at first," said Howett, 25, who is the athletic director at Penn State Shenango. "But once I realized it was real, I immediately started sobbing because I was so overwhelmed and excited, not only for myself but for Penn State Shenango. For us to be in Forbes Magazine is a huge honor as we continue to grow our athletic programs and get our name out there."

Howett has been instrumental in expanding the school's varsity sports programs, which only had two teams when she was hired in January 2021. Howett helped bring women's basketball and co-ed golf programs to the school and she is helping raise funds for a baseball program to begin play in 2024. She also created the campus' first student-athlete advisory committee.

Located in Sharon with an enrollment of about 500 students, Penn State Shenango is one of 24 Penn State University campuses. The school reinstated its varsity athletic programs in 2017 after a 20-year hiatus, with creation of men's basketball and women's volleyball programs.

Howett was a student at SRU at the time, gaining a variety of experiences as a sport management major and working in SRU's Athletic Communication Office. She later earned her master's degree in sport management at West Virginia University and wound up back at SRU last year, working in the Career Education and Development Office as a graduate assistant, when the AD job opened at Shenango.

"I knew I wanted to work in college athletics and this opportunity is a great way to build my portfolio," said Howett, who grew up in Saegertown and later Andover, Ohio. "To work for a Penn State campus is just incredible, and it's allowed me to stay in this area and stay close to my family.

"The people (at Penn State Shenango) have been incredible and we're in a unique position where we're able to start fresh. We don't have a playbook to follow and we can't use the excuse of 'This is how we've always done it.' Everything is brand new and that's what makes it so exciting."

Howett's passion, however, is not padding her resume or even working with colleagues. Her focus is on the students.

"The student-athletes here are really excited about what we have to offer," Howett said. "I am extremely passionate about providing opportunities for student-athletes, which is what made me want to stay in college athletics."

One of the first people that Howett contacted when she received the Forbes 30 Under 30 award was Brian Crow, SRU professor of sport management, who Howett considers a mentor.

"Amanda took advantage of all the opportunities in front of her and she wasn't afraid to step out of her comfort zone and take risks," Crow said. "She's persevered and this is a great honor for her and I'm sure it makes her family proud - and it makes everyone at SRU proud. She's one of the top 10 or 15 students we've had in our program during the 20-plus years that I've been here."

"I'm so grateful for SRU and I can't even begin to (describe) how much I loved my time there," Howett said. "My time inside and outside the classroom provided me so many opportunities that were just so incredible. You just don't get those anywhere you go."