SRU class given food for thought at Community Dinners 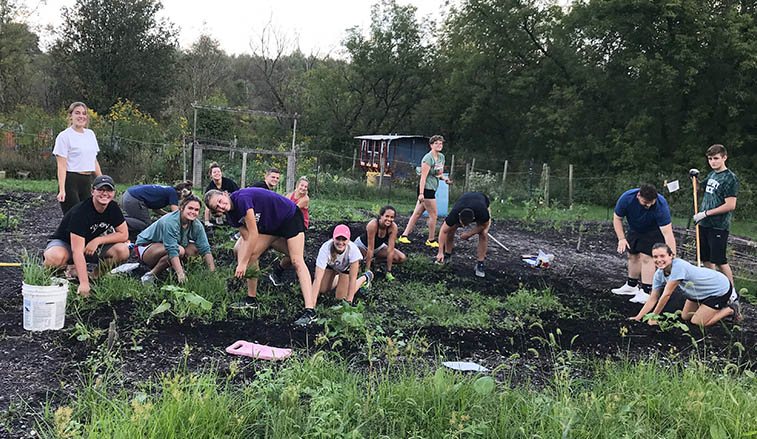 A freshman-level seminar class at Slippery Rock University grew vegetables in a garden plot, attended Community Dinners in Slippery Rock and explored how they can address hunger and other food-related issues affecting the community.

SLIPPERY ROCK, Pa. - The holidays are often a time for people to gather around a table, share a meal and nourish a sense of community. This semester, students at Slippery Rock University learned just how important food is to overcoming economic and social barriers.

For the first time in recent memory, an entire class of SRU students attended the monthly Community Dinners that are hosted by area churches and members of local service clubs at Center Presbyterian Church in Slippery Rock.

The students, members of a new freshman-level University Seminar course called Food Justice, had not planned to attend the dinners until they were invited to participate after community volunteers spoke to the class headed by Becky Thomas, assistant professor of parks, conservation and recreational therapy. Coincidentally, the dinners occurred at the same time the class met, Thursdays at 4:30 p.m.

"We're a part of the community, so this was an opportunity for the students to learn about it," Thomas said. "Before you can get involved in any type of community engagement or community service, it's important to have a relationship with the community and understand how to approach those service opportunities the right way."

According to Thomas, food justice is a movement that articulates a vision for a food system that provides equal access and opportunities for all people to have safe, healthy, locally produced and affordable food. Students learned how the movement is a form of advocacy for community control of food systems in which people can make culturally appropriate choices about the foods they produce and consume, while maintaining the well-being of people, animals and land. Students were also assigned to volunteer at least five hours assisting with food-related service projects, like growing and distributing food for the Macoskey Center Farm Stand.

"This class has really changed me," said A.J. Sumser, a freshman recreational therapy major from Avon, Ohio, who, as part of a group project, is proposing a student organization that, if approved, he plans to follow through with as president. "I learned so much, even things that don't even relate to food justice. Food justice can be connected to so many different areas in human development. We have a voice and the initiative to foster change and facilitate discussions. And through the Community Dinners we were encouraged to have discussions with people who are different from ourselves."

The class learned about food issues affecting the community by meeting with Becky Lubold, manager of the Slippery Rock Farmers Market; Carol Lambert, coordinator of the North Butler Feed My Seep Food Cupboard; Sylvia Walter, who helps run a summer lunch program for school-age children; and Wilma Oman, a co-coordinator of the Community Dinners.

"There are food access issues in this community, even for people who have jobs but are still struggling to feed themselves and their families," said Lubold, who runs the Farmers Market at Gateway Park in Slippery Rock, which attracts an average of eight "producer-only" vendors each Saturday morning from May to October. "Through the efforts of community volunteers, we've been working to address some of this. The other part of that is we have people who are producing food locally and we want to help support them and give them a market for their food, especially healthy, fresh food for the community."

The Feed My Sheep Food Cupboard in Slippery Rock provides food for more than 150 individuals and families each month, many of whom are seniors citizens living alone, without transportation and on a monthly budget of less than $750. Lambert said Feed My Sheep is intended to provide a "stop gap" for people needing food for a few days a month. All food is donated to the cupboard by a variety of community members, including Giant Eagle, various civic organizations, hunters and farmers. SRU classes and organizations also contribute to Feed My Sheep, including the Greek Life community, which donates thousands of canned food items through their annual Can Castle decorating competition.

"You never know unless you walk in someone's shoes what it's like to be hungry," Lambert said. "We're extremely fortunate to have support from the community; and the college students love helping people."

As the students in the Food Justice class discovered, it's important to learn about people before helping them, which breaks down barriers across generations, socio-economic classes and town-and-gown borders.

That was where the Community Dinners came in. According to co-coordinator Marilynn Martin, the dinners were organized about 10 years ago by groups from different churches around Slippery Rock to serve those in need, provide fellowship for the isolated and unite the community. The dinners take place at Center Presbyterian Church, 221 Center Street, on the third Thursday of each month from 4:30-6 p.m.

"We enjoyed having (the SRU students) there," Martin said. "It was great having them there because that's one of the things we encourage: people of all ages interacting."

"(Attending the Community Dinners) was our chance to really get into (the idea of food justice) and see how we can be active in the community," said Hannah McDermott, a freshman recreational therapy major from Waterford. "We talked a lot about how food brings people together. It was so cool to talk to people in the community and a lot of them go there just to have a good meal and talk to each other. You can build a lot around food."

"The students were asking (community members) questions about how the growth of the University is affecting their living," said Thomas, who had the students share vegetables that they grew from a garden plot at the Macoskey Center, because, "You can't learn about food justice without digging in the dirt."

The students recalled one man telling them about the history of Slippery Rock, a woman who grows her own tomatoes in her garden and another woman who faces the challenges living alone in the large house where she grew up.

"It's important to have conversations in different settings, especially off-campus," said Julianna Sabol, a freshman health science-public health major from Freedom, who is joining Sumser in launching a food justice student organization. "In our community, it's more about access. We are in a rural space with only one grocery store."

Sabol said many of the students in the class started making connections to how the food justice movement affects their areas of study, whether that's understanding the environmental impacts of sustainably sourced food or the social consequences of food insecurity. In addition to those students looking to establish a food justice-based student organization, others in the class developed a table tent education campaign that will be used around campus. Another group is advocating for post-consumer composting of food waste in campus dining halls by writing letters to administrators to influence changes in practices.

"We want to have a positive effect on the community," Sabol said. "Being in this class was a sign and it has helped me find my path and what I want to do: be active in the community and speak for those who aren't able to speak for themselves."

For additional information about the Community Dinners, contact Martin at: 724.556.9466. Donations are accepted from guest diners, while volunteers are welcome to assist with serving and cooking the meals.