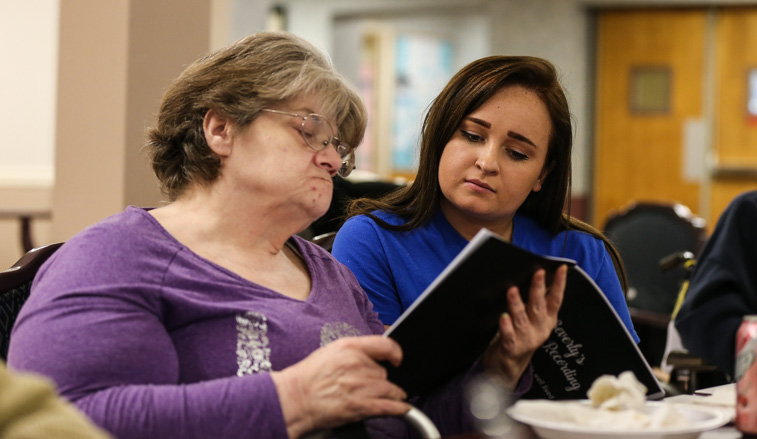 Beverly Hancock was among the nine residents at Trinity Living Center nursing home in Grove City who received books documenting their life stories from Slippery Rock University students, including Beverly’s partner Natalie Jasko, who visited the residents as part of a service-learning program called Dream Chasers.

SLIPPERY ROCK, Pa. - A Vietnam War veteran finds healing by befriending a Vietnamese student. An eccentric woman discovers joy from her conversations about seeing her favorite professional wrestler. In one year, Dream Chasers, a service-learning program at Slippery Rock University has opened a book of the human condition to reveal stories from the solemn to the sidesplitting but altogether meaningful for everyone involved.

Dream Chasers pairs SRU students with residents at a nearby nursing home for an entire semester. The students record residents' life stories for a booklet they provide them at the conclusion of their time together. The process could possibly lead to fulfilling one of the resident's dreams, but the bigger story is how the students and residents learn about one another and develop relationships.

"The service in Dream Chasers is about capturing people's stories and the legacies they impart," said Jeffrey Rathlef, SRU's director of service-learning and community service. "The learning is a question that drives the program: How does capturing the wisdom from the stories of others empower us to write our own?"

This past semester, nine SRU students were each paired with a resident at the Quality Life Services' Trinity Living Center in Grove City, visiting with their partner for 90 minutes during seven Saturday afternoons. The visits include a group icebreaker activity to prompt a question for each resident to answer about their past or their interests, then each student continues a conversation that they use to compile for their book, such as a family tree or a list of vacation destinations.

"My impression of nursing homes was they were just really sad places to be, but doing this program opened my eyes," said Jennifer Krusey, a junior health care administration and management major from Mercer who is the Dream Chasers service leadership coordinator. "The time flies and you wish you were there longer and could keep hanging out because you can tell how much happier they are when we are there. We do activities and fun things to get them out of their rooms and have them laughing. It's nice to see that my impression was wrong."

Dream Chasers started in spring 2017 as a pilot program at the Trinity Living Center. The idea was a collaboration between SRU's Office of Community-Engaged Learning, which was seeking a community partner; Don't Stop Dreamin', a QLS foundation that fulfills dreams of residents of its nursing, rehab and personal care homes throughout western Pennsylvania; and Gael Gilliland, a professional legacy recorder from Butler who offers courses and instruction for people to write the life stories of others through her website and companion book, "The Legacy Recorder."

Patty Kirkpatrick, community relations coordinator for Don't Stop Dreamin', met Gilliland at an event and immediately thought of SRU's desire for a service-learning opportunity. Because college students are accustomed to learning from textbooks and manuals to achieve course objectives, Gilliland's structured process for capturing people's life stories was an ideal match.

"The residents are a forgotten population who have wonderful, rich histories of their lives, and I knew this would be a wonderful project for residents in our nursing homes," said Kirkpatrick, who also knew that residents talking to SRU's Dream Chasers would help identify dreams that her foundation could fulfill, such as visits to tourist destinations, makeovers and other personal experiences. "The residents were just amazed that a student would take that time. That's significant to take that time to get to know them better."

SRU students who volunteer for Dream Chasers are matched with residents based on common interests. Last spring, when Anh Quan, a junior health care administration and management major from Hanoi, Vietnam, completed an application with sports as his interest he was matched up with Ed Reynolds, 77, formerly of New Wilmington, who once coached soccer.

Reynolds, a former sergeant in the Air Force who spent two years in Vietnam during his nine years in military service, did not know that Quan was from Vietnam and Quan did not know that Reynolds was a Vietnam War veteran. But after Quan told him he was Vietnamese, Reynolds asked a nursing home staff member whether it was OK to tell Quan that he fought in Vietnam.

"The second session I said, 'You can talk about the war. It's not a big deal for me. I really want to hear about it. It's not going to hurt my feelings because my family was not fighting in the war,'" Quan said. "That was really amazing for me because I never asked anybody in America about the war because not a lot of people I met fought in the war. I never heard a perspective from an American veteran, so I was very excited when he told me he was a veteran. War is not a happy thing but it's a good topic to talk about because both sides have different views and we can take the war as an experience to appreciate life."

"I just wanted to know if we made a difference," said Reynolds, who was born in New Castle and lived in Texas for part of his life and worked as a shop mechanic. "We were trying to set up a new government. I just wanted him to know that I didn't hold a grudge."

"It gave all of us goosebumps and became this healing moment," Rathlef said. "For him, that was huge."

"You realize with each resident, their stories are going to be completely different, depending on the life they lived and how good their memory is," Krusey said. "It's exciting to see because they are all different and so are their stories."

"Whenever we talk about wrestling, it just brightens up her face," said Jacqueline Routhier, a freshman early childhood/special education major from Rocky Mount, North Carolina, who was paired with Stevenson and laughs about her interest. "Anyone would be surprised, but she just wants to go see someone beat other people up."

Thanks to Don't Stop Dreamin', a van will take Stevenson and Hancock as her guest and QLS staff members to PPG Paints Arena in Pittsburgh Dec. 28 for World Wrestling Entertainment's Live Holiday Tour.

"And I'm dying my hair purple," proclaimed Stevenson, who is the most vocal of the residents and brings levity to the room.

Stevenson said she last attended a professional wrestling event when she was a little girl and her father took her to see Bruno Sammartino in Pittsburgh. Routhier and Hancock's partner, Natalie Jasko, a junior health care administration and management major from Homestead, are already talking about gifting shirts to their two residents that say something like "Marry me, John Cena."

But the most precious gift the students give to the residents are the books, offered at a celebration at the end of the semester, which includes information collected at each of their visits along with a personal message from the student.

"The book is passed along to the resident's family so their legacy is never left behind," Krusey said. "If they have great-grandchildren who they will never meet, they can learn about them so they are never forgotten."

Gilliland assembles the books and meets virtually with the students each Tuesday during their reflection sessions.

"My goal is to give the resident a book that documents something from their life and helps them see that someone cares about their story and their story is worth telling," said Gilliland, whose methods involve discussion prompts that the students follow. "Part of my goal is to encourage each person to start telling their story and change the conversation from a person's ailments to recognizing they are a person (with a story) and (who they are now) regardless of who people want them to be."

The presentation of the books is emotional for both the students and the residents, who often wipe tears between the turning pages. In many of the students' reflections, they write about how much they appreciate their own families through the relationships they developed.

"I often choose spending time with friends over being with my family and this is something I want to change in my life," Jasko wrote one of her reflections. "I want to spend my time with the people who matter most while I still have the time. In the beginning of the semester, I wanted to join this program because I wanted to impact someone else's life. Now looking back, I realized that Beverly has impacted mine in a significant way."

"Since joining Dream Chasers, I have started to write more things down and take more pictures so I can go back and look at them and relive the moment," Krusey wrote. "I want to remember the little things, not only for myself, but so I can share them with other people and hopefully inspire them like Mary has inspired me."

The residents don't write reflections but their reactions are obvious to the staff and by the list of interested participants for next semester.

"They are thrilled with it; they just love it," said Connie Eaton, an activity aide at Trinity Living Center who noticed how much the residents enjoyed learning about the students as well. "They just seem happier and they can't wait for their Saturday visits with the students."

Dream Chasers will continue in the spring semester as the program considers possible expansion to additional area nursing homes. SRU students interested in getting involved in the program can contact Krusey by email: jlk1039@sru.edu or by calling the OCEL at 724.738.4937.