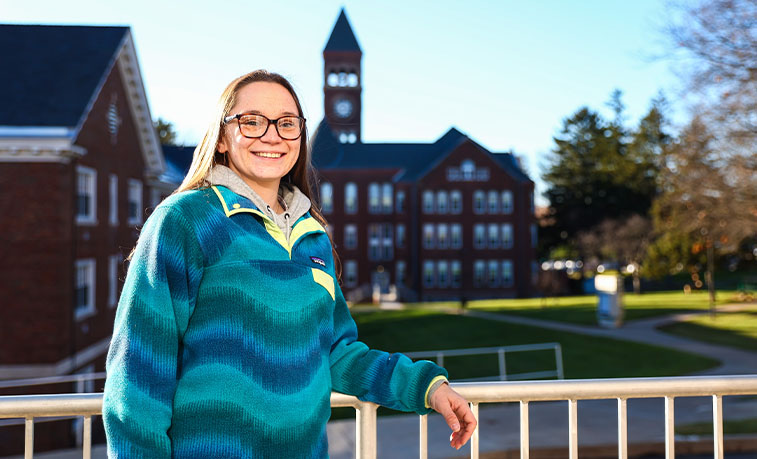 Meghan, a Slippery Rock University senior social work major, was once homeless but now she’s on her way to earning a college degree and helping people by providing services from which she benefited.

SLIPPERY ROCK, Pa. — Meghan may have been homeless once, but that time in her life doesn't define her. This Slippery Rock University student's full story is much more inspiring.

Meghan, an SRU senior social work major from Butler, is a living testimony to the impact of a college education, despite the fact that she was once living in a car while enrolled at another institution.

Getting a college degree might have seemed unlikely after Meghan graduated from high school. She lived in a supportive independent living facility managed by the Centre County Youth Service Bureau. She considered herself homeless off and on from 2012-17, including a semester at Juniata College where she lived in her car while attempting to earn a degree in social work.

"I've been on the receiving end of a lot of social work benefits," said Meghan, mentioning the help she received when she was 14-year-old from Alison Turley, a certified counselor at Mount Nittany Middle School. "I've had the world's greatest mentor, and that's what the world needs more of. I wanted to be more like Ali and help other kids and young adults."

Her college journey, which also included time at Penn State University, Lock Haven University and Juniata, was paused in 2017 when she returned to work, followed by her father passing away in 2019. Still, she persisted and enrolled at SRU in the fall of 2021.

"I moved to Pittsburgh, and one of my really good friends who is an SRU alumnus told me how great the school was, so I came here and I've loved it," Meghan said. "I've been really challenged by the social work faculty who pushed me out of my comfort zone and into my growth zone to where I am now a more critical and worldly thinker. I'm able to look at problems through a different lens than I had before, mixing some of my street smarts with the theories of upper-level classes of academia. I've grown into a completely different person than I was two years ago before I came here."

Meghan sure hasn't lost her grittiness during her transformation. She's currently working as an apprentice for a mechanic in Butler County, doing wheel alignments. But it was another side job during her time at SRU that led Meghan to effect change for other students, particularly those who were homeless or came from foster care.

As a student worker in the SRU President's Office, Meghan met with SRU President Bill Behre and was a vocal advocate for students like her to have easy access to resources.

"I was really impressed when Meghan came to me with suggestions that would help someone coming out of the foster care system," Behre said. "We had most of the resources available on campus, but students didn't know about them and they weren't found in one centralized place our website. She was instrumental in making us think about new ways to reach these students and make sure they receive these resources."

SRU has since created a webpage specifically for foster students or unaccompanied homeless youth and their unique challenges, including emergency housing, access to the University's food pantry, and tutoring and mentoring. There are more than 15 SRU students who have self-identified as coming from the foster care system, and likely more who haven't self-identified.

"I wouldn't have thought that my voice mattered and I would sit at a table with a president of a university, but Dr. Behre listened," Meghan said. "I love the opportunities I've had here at Slippery Rock. I've had the chance to advance the former foster youth support here at SRU. I've also been given a lot of opportunities for research."

Under the mentorship of SRU social work faculty, Meghan will be presenting at an upcoming National Alliance on Mental Illness conference in Pittsburgh about LGBT youth mental health and child welfare. She'll also be interning with the Southwestern Pennsylvania Human Services in Butler County in the spring.

Meghan received that help and took advantage of the opportunities presented to her. Her story demonstrates the far-reaching impact of a college degree. Those who earn degrees are not the only beneficiaries. They impact their friends, families, and communities in ways they couldn't have previously imagined.

"A college education can be generation changing," Meghan said. "You can set your family or your future family up for success with better jobs and things that you didn't have when you grew up. And to be able to make that change within your own family or community is really important."

"Meghan's determination speaks to what we do here at SRU," Behre said. "We help people change the trajectory of their lives. Meghan may have encountered an awful lot of adversity in her life, but that never stopped her. It only motivated her more. And the SRU community is better off for having her on campus with us."