Slippery Rock University has entered the self-study design phase of a two-and-half-year process to pursue its reaffirmation of accreditation with the Middle States Commission on Higher Education in 2021.

SLIPPERY ROCK, Pa. - With 2019 only four days old 2021 may seem like a long time off. Not so, say members of the Slippery Rock University team charged with leading the University's efforts to earn reaffirmation of accreditation from the Middle States Commission on Higher Education. In fact, their work has already begun in earnest.

While individual academic programs can be accredited by their discipline's national accrediting body, regional accreditation from voluntary, non-governmental membership organizations like MSCHE ensure that the entire University is accountable to standards within the context of its institutional mission.

"Accreditation is an endorsement by our peers that we do what we say we do," said William Behre, SRU president. "It's one method toward continual self-reflection and self-improvement."

MSCHE accredits institutions from a five-state area once every eight years (formerly 10-years), with periodic, interim reports in between. SRU's last reaffirmation of accreditation came in 2011.

According to Mary Hennessey, assistant to the provost and co-chair of the accreditation steering committee, the reaffirmation of accreditation process is more than being accountable to a mission statement or compliant with the federal government; it fosters improvement and innovation.

"It's meant to get you to evaluate your school and make improvements," Hennessey said. "The review board comes in wanting you to do well. We started the process already because it takes a long time to do a self-study and it gives us an opportunity to look at things and determine what sort of improvements we need to make before (the review board) comes for the site visit."

SRU has already entered the first of four phases in the process, the self-study design phase, which included a small group of University administrators attending the Self-Study Institute, Nov. 5-7 in Philadelphia, where MSCHE leaders helped institutions scheduled for upcoming accreditations prepare for their self-study. SRU also emailed a survey of institutional priorities to students, faculty and staff in November asking them to select the top three initiatives -- from a list of 10 -- on which the University should focus, based on the institution's Mission Statement and Strategic Goals. 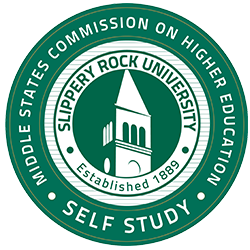 "It's a very important part of the reaccreditation process for the University to involve the thoughts and opinions of all of our constituencies," said Philip Way, provost and vice president for academic and student affairs, who was among the SRU officials who attended the Self-Study Institute. "We want people to focus on priorities in which innovation can be key or areas of improvement that could be addressed through innovative processes as we look to the future."

Based on feedback, Behre will ultimately choose SRU's three institutional priorities, which will be used as a lens to interpret the MSCHE's standards.

"I'd like priorities that we can achieve, that are aligned with our mission and values, that match our resources and that focus on student success and student outcomes," Behre said. "We want people to get involved and provide input because the success of the self-study is dependent on widespread buy-in from the campus community. People have to share their views if they want them to be reflected in the self-study."

As co-chairs of SRU's accreditation steering committee, Hennessey and Rebecca Morrice, associate professor of theatre, are collecting feedback from campus stakeholders by hosting open forums and presentations with selected groups, including the University's council of trustees and through upcoming student engagements. The self-study design phase will conclude in March with the selection of the institutional priorities; a visit from Sean McKitrick, MSCHE's vice president of institutional field relations; and the appointment of nine working groups, each with approximately 10 campus representatives, whose chairperson will serve on the steering committee.

The areas of focus for the working groups will be based on the seven standards set forth by MSCHE and two additional groups assigned to evidence and communication. The MSCHE's seven standards are:

Each of the standards include more than 50 criteria. According to Hennessey, the evidence portion of the self-study was once a more elaborate and tedious part of accreditation, including such things as counting the number of books in the library. And, while it's still important to "check the boxes" on areas such as enrollment, Hennessey said, MSCHE's emphasis is now more mission based.

Some of the ways that process has changed since SRU's last reaffirmation of accreditation in 2011 include more streamlined, electronic reporting and MSCHE conducting more compliance checks on behalf of the federal government. There are eight areas of federal compliance to monitor, such as financial aid and record-keeping. Financial aid is critical because, without students receiving federal aid, institutions like SRU would not exist.

After March 29, SRU will enter the longest phase of the process, the self-study, before preparing for a site visit in 2021 from a peer-review board comprised of independent analysts from other institutions. The review board will file a report and, according to Hennessey, about two-thirds of schools will receive changes they need to make. There were no issues identified in SRU's 2011 report.

"We're a pretty strong campus so I don't think we'll have any problems," Hennessey said. "But there are still implications and a lot to learn from the process. Sometimes accreditation can seem like this big bureaucratic process that doesn't affect people's daily lives, but it really does because Middle States helps us become a better institution. We'll get feedback from peers and it can be a really rich experience."

For more information about SRU's MSCHE self-study process, including a link to the institutional priorities survey, visit: www.sru.edu/msche.