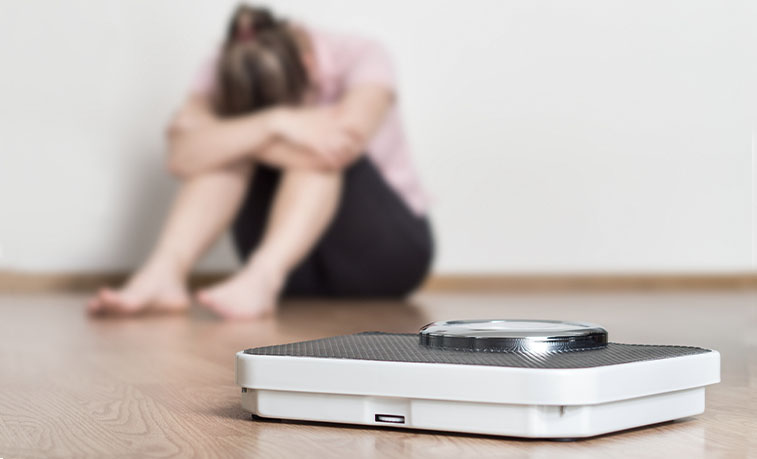 Anorexia nervosa is an eating disorder that is difficult to treat, and to remedy that, a Slippery Rock University psychology professor has co-authored a book for clinicians to better address anorexia patients by involving patients’ family members.

SLIPPERY ROCK, Pa. — Anorexia nervosa affects 4.3% of Americans. Far fewer people suffer from this eating disorder, characterized by an abnormal low body weight and fear of gaining weight, than the 42% of Americans who are clinically obese. But that statistic doesn't offset anorexia patients' daily struggle or change their reality, and there is much room for improvement in addressing this condition, according to a Slippery Rock University psychology professor.

"Anorexia is a chronic disorder that historically has been very difficult to treat," said Jennifer Sanftner McGraw, professor of psychology and department chair. "There's not as much research on anorexia as there is on all of the other eating disorders, and partly it's because people can often be very resistant to treatment and we just have not evolved to the point where we have very many effective remedies."

That's where Sanftner McGraw and her colleagues, first author Mary Tantillo, from University of Rochester School of Nursing, and co-author Daniel Le Grange, from the University of California, San Francisco, come in. Together, they recently wrote a book intended to be a treatment manual for clinicians titled "Multifamily Therapy Group for Young Adults with Anorexia Nervosa: Reconnecting for Recovery."

The book is based on years of research conducted with several patients and their families, primarily with a recent pilot study of 10 participants in multiple cycles led by Tantillo at the Western New York Comprehensive Care Center for Eating Disorders. Tantillo, a professor of clinical nursing at UR, is the center's director as well as the founder of The Healing Connection, an outpatient clinic in Rochester.

The co-authors' approach includes the use of therapy sessions involving family members or other people the patient chooses. This multifamily therapy group is a type of intervention that is used for other types of addictions and disorders as well, including schizophrenia. "Multifamily therapy group treatments have been shown to be effective, but this is the first one that's ever been outlined specifically for anorexia," Sanftner McGraw said. "Because we've worked with young adults, it's often the parents in the therapy group, but it can be anyone who is important to the patient to support them in their recovery. Our approach, what we call 'Reconnecting for Recovery,' weaves together several different psychological theories in a novel way to treat this disorder."

The book covers 16 sessions of group treatment that start off weekly and then spread out over the course of a few months. Sanftner McGraw said the sessions are not intended to be a standalone treatment, as patients are often also in individual therapy.

"The treatment is really about helping patients rebuild connections with people that are important to them because those connections then become a source of strength in overcoming the disorder," Sanftner McGraw said. "But anorexia isn't a weakness; it's a disorder that people develop. We teach them about the causes so they can understand where it came from, know that it's not their fault and realize that there are ways that they can overcome it."

According to the Mayo Clinic, people with anorexia place a high value on controlling their weight and shape, using extreme efforts, such as vomiting after eating, misusing laxatives or diet aids and exercising excessively, all of which significantly interferes with their lives and in some cases can be life-threatening. Sanftner McGraw said the mortality rate of 20% of people diagnosed with anorexia is alarmingly high, as people are starving themselves to death or dying from causes related to anorexia.

Sanftner McGraw said there are three main causes of anorexia resulting from a person's makeup: biological, psychological and sociological. Biological depends on genetics and neurological effects rooted in the brain, while psychological effects stem from things such as low self-esteem and past trauma. People most often blame the social aspects, pointing to advertisements and other media culture that emphasize thin bodies and appearance.

"The social part gets a lot of attention from people, such as feminist groups," Sanftner McGraw said. "(Social aspects) are a big factor in eating disorders and it's interesting if you look across all cultures, you only see eating disorders in cultures that have an emphasis on appearance and thinness. But then again, everyone in our culture (that emphasizes appearance) is exposed to those images and most of us don't look (extremely thin) and don't develop eating disorders. There are those other factors as well."

Anorexia affects women more than men but anyone at any age can have the disorder.

"We focused on young adults because we find them to be a population that just hasn't had as much attention in the literature," Sanftner McGraw said. "Young adults are trying to become independent and some of them are going to college or starting jobs and figuring out who they are. When they have anorexia, it really keeps them from establishing themselves, and so they're kind of stuck. The eating disorder really holds them back."

Sanftner McGraw hopes the book will benefit the practice of licensed clinicians, psychologists, social workers and professional counselors, but also advance the field of research.

"I hope that it will lead to larger studies that can compare this treatment approach against a placebo," Sanftner McGraw said. "In psychology clinical research, the randomized controlled trial is the gold standard for showing the effectiveness of a treatment. With the full treatment approach laid out in this book, researchers could design studies to demonstrate its effectiveness beyond what we were able to do in our previous research and pilot groups.

"With the combination of different theories that this book includes, it makes for a really powerful approach. I've seen tremendous change and growth come from this. That's what makes this is exciting to me and what motivates me. We put in a lot of hours in getting this out there, and it can really help people. Any trained clinician, with some experience in eating disorders and group work, can pick this up and begin to really transformed their practice."

The book is now available for purchase on the Routledge website. Sanftner McGraw and Tantillo also discussed the book as guests on the ED Matters: The Gurze/Salucore podcast.

For more information about the psychology program at SRU, visit the department's webpage.