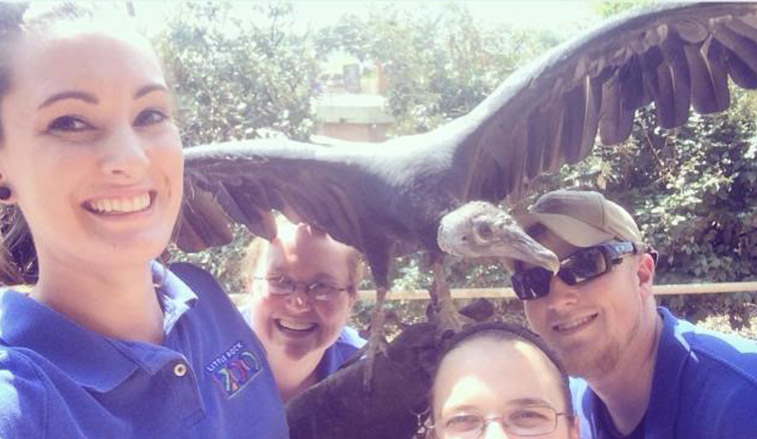 From left: Hannah Baker, who is taking classes online through Slippery Rock University’s environmental education master’s degree program, was recently promoted to curator at the Little Rock Zoo in Arkansas.

SLIPPERY ROCK, Pa. - Her Rock education is taking a Slippery Rock University graduate student a long way at the Little Rock Zoo. She was recently promoted to a curator position after completing an internship working alongside the zoo's director.

Hannah Baker, an online graduate student majoring in environmental education from Maumelle, Arkansas, began her internship at the 33-acre zoo last May, adding education to her regular duties as the zoo's senior keeper of education animals.

"I'm in this (new) position now because of the internship and getting my master's degree at SRU," said Baker, who plans to finish the two-year, 30-credit environmental education degree ahead of schedule in July 2019. "The most important thing was the flexibility of SRU's online program. I was in a management position already and I was easily working 50 hours a week, so I started looking at online programs and SRU has the best program related to what I want to do."

Baker has worked at the Little Rock Zoo since 2011, first as an intern at the reptile exhibit when she was an undergraduate biology student at the University of Central Arkansas. After graduating from UCA in 2012, she worked her way up to senior keeper of education animals, coordinating programs that use animals for educational purposes at the zoo or through outreach at locals schools, but her experience as an online student at SRU propelled her to a salaried, upper-level management position. There are only five curators at the Little Rock Zoo and the next step in her career would be assistant zoo director or director.

"I thought I was going to have to travel to move up professionally," said Baker, who is a native of the Little Rock area. "Most people (have to relocate) because zoo jobs are pretty competitive, but I made some really good connections and relationships here."

SRU's online environmental education program was recommended to Baker by a former coworker, Katy Holloway, an SRU graduate who earned her master's degree in park and resource management online in 2016.

"SRU is known for the environmental sciences and I've been extremely impressed by the online program," Baker said. "You can tell that (the professors) know what they are doing. The lectures are interactive. I'm not just watching PowerPoint presentations. We have discussions and we can chime in with the voice-recording software to collaborate."

"Hannah's experience captures exactly what we're hoping to accomplish through SRU's online graduate program in environmental education," said Becky Thomas, assistant professor of parks, conservation and recreational therapy. "The program offers students the flexibility to complete their degrees while they're working full time by connecting their coursework to their professional experience. We provide students the tools they need to advance their careers through this process, but it's up to the students to decide where they want their careers to go.

"Hannah took advantage of (our online program) by crafting objectives for her internship that challenged her and allowed her to showcase her unique strengths in a way that ultimately led to a promotion in a career that she loves."

In her new role, Baker will manage a staff of 12 employees and oversee more than 150 animals in the zoo's education department, which teaches people about animals and wildlife conservation through both onsite and outreach programs. For example, her department recently presented programming for more than 2,000 schoolchildren in one week.

The Little Rock Zoo has more than 700 animals, from gorillas and lions to lemurs and penguins, but Baker's favorite animal to work with is the vulture.

"When people hear I work with African penguins and I say my favorite animal to work with is the vulture they are always like, '... What?,'" Baker said. "Vultures are often misunderstood. It's fun to change people's minds about an animal that's not necessarily pretty, or fluffy or attractive."

Baker said she likes vultures because they are easy to train and motivated by food, as well as having a fun personality and being good for the environment.

"Because they have such strong stomach acid, they are able to destroy diseases when they eat," Baker said. "They are Mother Nature's garbage disposal."

Vultures are also known to engage with visitors at the zoo, including clipping people's hats during Baker's flight demonstrations.

Baker will now be working with people more than animals in her new job. She will have influence in decision making for the zoo's animal collection, such as breeding and transfers, as well as planning the programming and enhancing the guest experience.

"But I'm still going to be doing the free-flying bird programs," Baker said. "They said I could be as involved as I want to be."