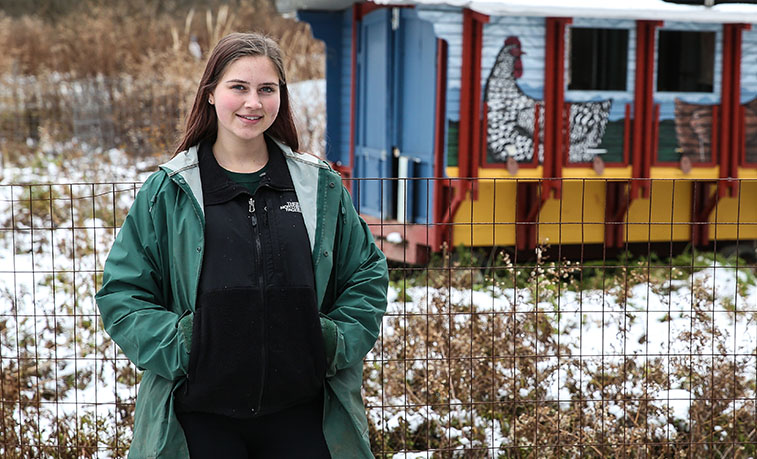 Danielle Blide, a Slippery Rock University freshman biology major from Newton, New Jersey, worked at the Macoskey Center last fall as one of five students in the inaugural cohort of SRU’s Bonner Leader Program. This semester she is leading SRU’s partnership with Don't Stop Dreamin’, a foundation of Quality Life Services based in Butler.

SLIPPERY ROCK, Pa. — Danielle Blide doesn't volunteer just so she can put "community service" on her resume; it's a part of who she is. Prior to becoming a student at Slippery Rock University, Blide helped her church conduct food and clothing drives and volunteered at her former elementary school, reading stories and assisting with science projects and field days.

"I just felt like it was something I owed to the community," said Blide, a freshman biology major from Newton, New Jersey. "I got enough out of my community and I thought it was time for me to give back and help other people. And it was something I enjoyed doing."

Blide has the opportunity to continue giving back as one of five freshmen in the Bonner Leader Program at SRU. Bonner students receive a scholarship and are paid to lead a community-service partnership for the University.

After working at three service locations on a four-week rotation during the fall 2019 semester, Blide's spring 2020 semester assignment has her partnering with Don't Stop Dreamin'. Founded in 2005, Don't Stop Dreamin' "fulfills the dreams of residents living in Quality Life Services' skilled nursing and personal care facilities." DSD also provides dream fulfillments for patients of Three Rivers Hospice. Resident "dreams" can include such things as fishing trips or attending concerts or sporting events.

One of the ways that resident dreams are identified are through an SRU service-learning program called Dream Chasers. As part of Dream Chasers, SRU students visit with residents at nearby nursing homes and record the residents' life stories for a booklet they provide the resident at the end of their time together.

"I didn't have grandparents growing up, so I didn't have that experience of talking often with an elderly person, but now I have a better understanding of their experiences," said Blide, who now plans to minor in gerontology as a result of her involvement with the program. "There are such diverse issues that come up and I get to understand their lives through their experiences and how they are coping with being away from their families. That's been very moving for me."

Blide has also been able to work with people with disabilities during her time with DSD.

"Listening to their stories and how they've overcome adversity has been very powerful for me because I've never met someone in that situation," Blide said. "I have a greater appreciation for working with people who have disabilities."

Having a sustained relationship with a community partner is also something that Blide embraces. Bonner Leaders at SRU receive $5,000 in financial support each year for four years, including a $3,000 scholarship and $2,000 earned through their work in the community. They must commit at least 10 hours per week during the academic year to leading a partnership with a community organization and maintain a minimum 2.5 GPA.

"Rather than just volunteering at random places or events for a short amount of time, (having an assigned partner) is a better way to connect and get a feel for the community," Blide said. "That's one of the reasons why I wanted to be a part of this program."

SRU joined an exclusive network of 64 institutions in the U.S. to adopt the Bonner Foundation's civic engagement and scholarship model. The Bonner Foundation oversees the network to ensure that institutions are expressing the organization's "common commitments" of civic engagement, community building, diversity, international perspective, social justice, spiritual exploration and wellness.

Blide applied for the program and was interviewed by SRU's 10-member Bonner Program Advisory Committee. The BPAC, which is comprised of SRU faculty and staff, Bonner Program staff and student coordinators and a community member, chose Blide and four other first-year students from among nearly 50 applicants to represent the program's first cohort. Subsequent cohorts will include 10 students per year. Once the program is operating at full capacity there will be 40 students in the program.

"We aspire all of our Bonner Leaders to have or be able to develop traits that include civic leadership, a diverse perspective and a passion to effect change related to social issues and the larger community," said Sami Laurence, SRU's Bonner Program developer. "The qualifications for the program are consistent with the Bonner Foundation's common commitments. Through their lived experiences, diversity and desire to learn, our first cohort meets these qualifications and they are certainly positioned to lead the way in developing partnerships with the community and setting a precedent for future Bonner students who enter the program."

In addition to DSD, other community partners include the Slippery Rock Community Library and the Macoskey Center for Sustainability Education and Research. Each Bonner Leader will work to build capacity for more SRU volunteers and resources and by their fourth year in the program, their focus will shift to community action and scholarship.

As an aspiring physician assistant, Blide feels inspired working with an organization that supports patients and other health care recipients. She's driven by her own struggles with Type 1 diabetes; her older sister, Lindsay, who works as a cardiology nurse; and, most poignant of all, losing her father to cancer in 2017.

"Being around health care professionals influenced me, but the situation that motivated me the most was my father passing away," Blide said. "After going through that, I wanted to help others and those families that are experiencing something like that."

To learn more about the BLP at SRU, including information for students applying for the 2020-21 academic year, click here.