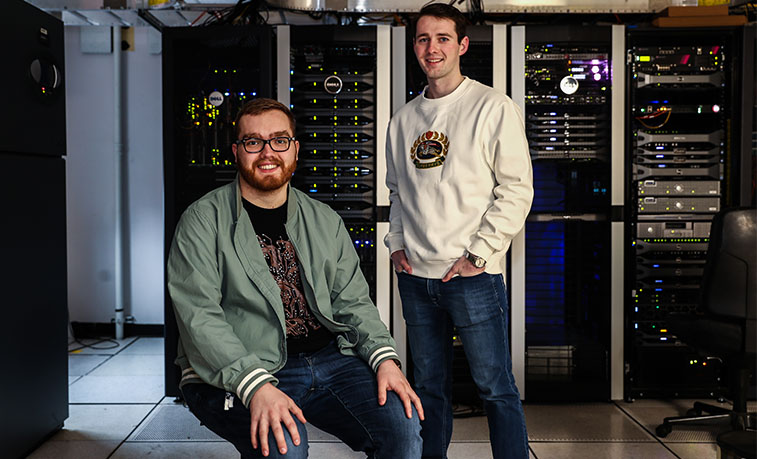 From left, Slippery Rock University senior computing majors John-George Sample and Alexander Gessinger are members of a research team that has begun research at Lawrence Berkeley National Laboratory, home to the second most powerful supercomputer in the U.S.

SLIPPERY ROCK, Pa. - Twelve Nobel Prize winners worked at Lawrence Berkeley National Laboratory in Berkeley, California. Sixteen elements on the periodic table were discovered there. The lab was the birthplace of more than 600 isotope discoveries, more than any other lab in the world. Now, it can count three Slippery Rock University students among its researchers. The trio is helping scientists from around the world discover better ways to use supercomputers.

LBNL, commonly known as Berkeley Lab, is a multiprogram national laboratory managed by the University of California for the U.S. Department of Energy's Office of Science. Thanks to a faculty-student research grant from Berkeley Lab, and a connection between an SRU computer science professor and a Berkeley employee, the three SRU students were hired as temporary Berkeley employees, joining the more than 4,200 scientists, engineers, faculty, postdoctoral scholars and graduate and undergraduate students currently on staff. 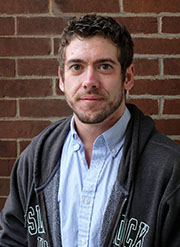 "They are getting exposed to brilliant minds and the best researchers in the world," said Sukhija, who is also director of SRU's Center for Cybersecurity and Advanced Computing, known as C2AC. "This experience is hard to get, even for a Ph.D. student. Everyone's talking research there and trying to solve problems and they get to be part of that."

"We're ecstatic to join a national lab," said Gessinger, who after the LBNL experience plans to pursue a master's degree in data science or work in the industry in the fields of machine learning or artificial intelligence. "It's exciting just to be near all the activity that's going on in the Silicon Valley and learn at such a prestigious lab. It's almost overwhelming."

Sukhija worked with LBNL in 2016 and met Elizabeth Bautista, group lead for the Operations Technology Group at Berkeley Lab, through supercomputing conferences and as fellow members of the Sustainable Horizons Institute, a nonprofit organization. They discussed having top students from SRU's computing program join a research team led by Bautista. Gessinger previously conducted research at the Oak Ridge National Laboratory optimizing the use of big data systems, while Sample and Sevin each coauthored separate book chapters with Sukhija related to cybersecurity, including Sample's case study on the use of Blockchain technology to prevent voting machines from being compromised.

The SRU research team will be collaborating on a new project titled "Data Analytics for Extreme-Scale Scientific Computing." The researchers are analyzing high performance computers by taking large datasets used in Berkeley Lab to predict and prescribe ways to optimize data processing. They are making information available so that other data scientists can more easily perform actions in optimal conditions to conserve time and energy, based on parameters such as the temperature in a lab's server racks, and in ways that more easily detect malicious activity if data is compromised.

Few people have access to such large datasets to run these simulations. Berkeley Lab is home to the second most powerful supercomputer in the U.S., with 1.05 quadrillion calculations per second; the U.S. Department of Energy's most scientifically productive supercomputing center, with more than 4,000 users from laboratories and universities logging on to the systems across the country; and more than 3 billion computational hours per year. Their networks transfer dozens of petabytes of data each month, which are equal to a million gigabytes.

Scientists from around the world rely on Berkeley Lab's facilities for their own discovery science, and one of the founding concepts of the LBNL is "the belief that scientific research is best done through teams of individuals with different fields of expertise, working together."

SRU's three students reflect this approach. Gessinger has a background of scheduling jobs run by HPCs. Sevin works with cybersecurity and data visualization, creating portals so that researchers and end users can identify datasets and make decisions. Sample has experience using Blockchain technology, which improves cybersecurity by making attacks easily detectible through a distributed ledger and that requires hackers to conduct massive computing efforts in order to modify data.

"(LBNL) wants to create a way to easily distribute this data to the public but also maintain some control over it," Sample said. "They want a system where a user can request data and the lab approves it and sends it back to them. We'll be using Blockchain-based access control, which is a relatively new concept."

"The benefits of the research are three-fold," said Sukhija said, mentioning visualization, cybersecurity and efficiency of the HPCs. "That's why I took the team because they have different talents. They can work on different aspects and learn from each other and the different technology."

The benefits to the students, however, go petabytes beyond what they could accomplish among themselves in a classroom. They will have access to the most advanced computers and and data scientists in the world.

"Being able to do research at LBNL is a rewarding opportunity that will allow me to expand my current skills," said Sevin, who plans to pursue a doctorate degree in computer science. "While I have already done research in the scientific computing field, working at LBLN will provide me with experience in a real-lab setting."

"It's just extremely cool," Sample said. "Berkeley Lab is a huge name in the scientific community and the work they've done is so impressive. To be able to say that I'm going to be a part of that, even for a few months, is just surreal. And having Berkeley National Lab on your resume will open some eyes."