Everglades National Park in Florida, one of the largest parks in the U.S. National Parks Service, is managed by a Slippery Rock University alumnus who serves as chief ranger.

SLIPPERY ROCK, Pa. — As a college student in the late 1980s, Tom Iandimarino attended Slippery Rock University, which is located in a small corner of Butler County, but now it's his job to protect land that's roughly the size of three Butler counties combined. Iandimarino, a 1989 SRU graduate with a degree in resource management, was recently hired as the chief ranger of Everglades National Park in Florida, which is one of the top 10 largest parks in the U.S. National Park Service. But this is not a traditional park with trees and mountain vistas.

"It's not the same beauty that most folks imagine when they think of national parks," Iandimarino said. "We don't have mountains to hike or a whole lot of trails, but you can get in an airboat or a canoe and never be seen for a few days. The people who come here like to go fishing, catch their dinner, and camp on island and really enjoy the park. And when you enjoy the place where you work, it's so much easier to stick around." 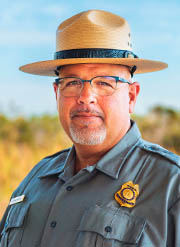 "This is a great career opportunity for me because I can continue to be the leader that I want to be," Iandimarino said. "I've come up through the ranks within Everglades National Park and I'm very happy to continue the mission that we're working toward. We're restructuring everything after hurricanes hit us hard the last few years, and now we're building new visitor centers and ranger stations and we're making sure that the space for the visitors is appropriate."

"Chief Iandimarino's leadership style demonstrates a commitment to excellence in visitor and resource protection, while also holding onto important values such as care, honesty, integrity and practicality," said Pedro Ramos, Everglades National Park superintendent, in a statement released by the NPS. "These values, coupled with his deep knowledge and experience in South Florida, will ensure that Everglades National Park meets the demands and expectations of visitor and resource protection today and in the future."

The Everglades is one of the most diverse wildernesses in the NPS, with sawgrass prairies, pine rocklands, open marine waters and the largest ecosystem of mangroves in the Western Hemisphere. It provides habitat to more than 30 threatened or protected species, including the Florida panther, the American crocodile and the West Indian manatee, and it is home to hundreds of species of animals.

A native of Youngstown, Ohio, Iandimarino wanted to be game warden early in his life and he came to SRU because he wanted to pursue some type of career in resource and wildlife management. Iandimarino studied under the late Bill Shiner, who started what is now the SRU Department of Parks and Conservation, serving as chair and professor for 31 years.

"I took seasonal law enforcement training that (SRU offered at the time as a) partner with the National Park Service, I got my degree, and the rest is history," Iandimarino said. "I didn't know how to get where I wanted to be, but I knew that if I went to the right college and met the right people in my field, I'd figure something out. Thirty-two years later, I'm still doing it."

More information about SRU's park and resource management programs is available on the Parks and Conservation Department webpage.