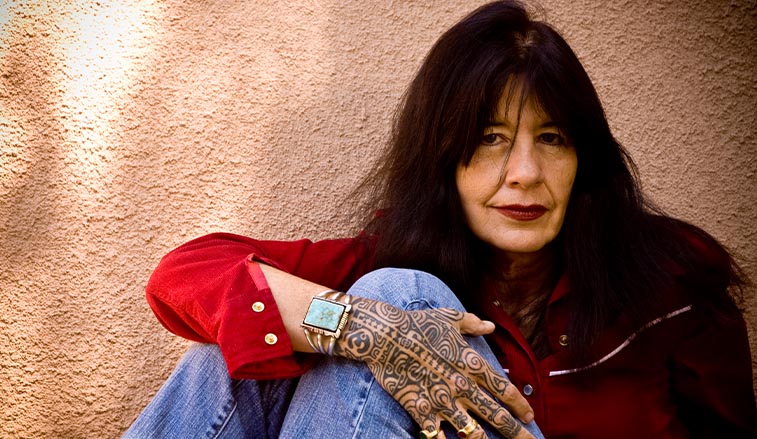 Joy Harjo, the sitting U.S. poet laureate, will read poetry and conduct a discussion about social justice in an event hosted by Slippery Rock University through the We Stand Together initiative of 14 university presidents and chancellors. (Photo by Paul Abdoo.)

SLIPPERY ROCK, Pa. — Slippery Rock University will host sitting U.S. poet laureate, Joy Harjo, for a special virtual presentation, 5 p.m., April 6, via Zoom. Harjo, the internationally renowned performer and writer, will speak as part of a series sponsored by We Stand Together, a national coalition of presidents and chancellors of 14 universities from across the country in bringing forward a message of unity to eradicate discrimination and racism.

SRU President William Behre is a member of We Stand Together, which is a working group of the American Association of State Colleges and Universities' New Presidents Academy.

"We're honored to be the host institution for such a prestigious speaker," Behre said. "The coalition will be providing this ongoing speaker series that will incorporate politics, activism and the arts, and I can't think of a better representative of the arts than Joy Harjo. We look forward to her unique message, especially as it relates to her experiences as a Native American."

Harjo, a member of the Muscogee (Creek) Nation, became the first Native American appointed U.S. poet laureate in 2019. She will present from her home in Tulsa, Oklahoma, sharing her poetry and speaking about social justice, as well answering questions from the audience.

Mark O'Connor, associate professor of English, and Julie Naviaux, assistant professor of English, will serve as co-moderators of the event. O'Connor and Naviaux were selected based on their expertise in creative writing and American literature, respectively, but they also have their students reading Harjo in their Critical Reading and American Literature classes this semester. O'Connor is having students read Harjo's memoir, "Crazy Brave," while Naviaux is having her students read selected poems by Harjo, including "Conflict Resolution for Holy Beings."

"She's amazing," O'Connor said. "She's a two-time poet laureate, which is incredibly rare, she's well-published, she does poetry, nonfiction, activism, journalism, music ... she's all over the chess board, and we get to catch her at the top of her game. And she's cool: she's someone you would want to have a coffee with. She might even take out her saxophone and play it for you. She's also relatable to students because she's a first-generation college student and she'll show how she got to where she is."

Harjo is author of nine books of poetry, including the highly acclaimed "An American Sunrise," several plays and children's books, and two memoirs. Among her many honors, Harjo was earned the Ruth Lily Prize for Lifetime Achievement from the Poetry Foundation, the Academy of American Poets Wallace Stevens Award, two National Endowment for the Arts fellowships and a Guggenheim Fellowship. As a musician and performer, Harjo has produced six award-winning albums including her newest, "I Pray for My Enemies." She was first appointed U.S. poet laureate by the Library of Congress in 2019 and is currently serving her second term as the nation's official poet.

This will not be the first time Harjo has spoke at an SRU-hosted event. She was on campus in 2005 for a public reading hosted by the English Department.

"In the politically intense climate that the U.S. is in right, she provides a different perspective," Naviaux said. "She writes about English as a colonizing language but she doesn't advocate this hardline rejection either. A lot of her writing is about coming together and understanding various perspectives. Students like her use of multiple voices and perspectives."

People can register for the event by completing an online form. For more information about Harjo, visit her website, www.joyharjo.com. More information about the Together We Stand initiative through the national coalition of 14 presidents and chancellors, is available on its website.