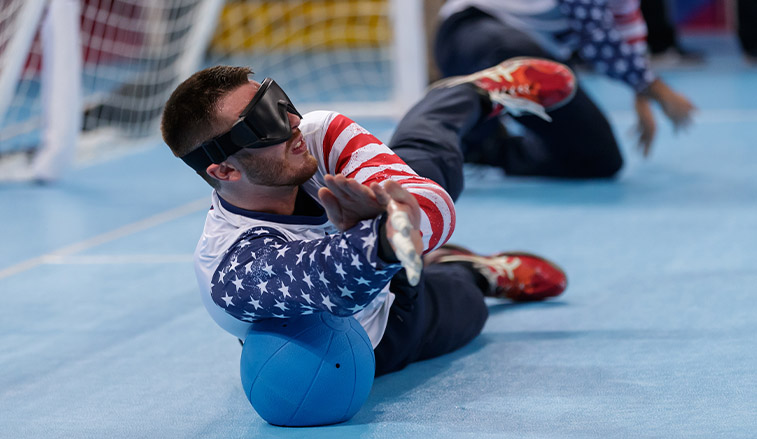 Calahan Young, a 2017 Slippery Rock University graduate, is co-captain of the U.S. men’s national goalball team that will compete in the Paralympic Games this summer in Tokyo. Young will be the keynote speaker in an event hosted by SRU’s President’s Commission for Disability Issues, April 22. (Photo by Joe Kusumoto)

SLIPPERY ROCK, Pa. — By hosting its Breaker Barriers event, the Slippery Rock University President's Commission for Disability Issues celebrates people who create opportunities for individuals with disabilities at SRU. This year, the Breaking Barriers event will be conducted virtually, 5:30-6:30 p.m., April 22, via Zoom. The event is open to the public.

The PCDI will recognize an SRU student and employees with its annual Breaking Barriers Awards. Also, a keynote address will be delivered by Calahan Young, a 2017 SRU graduate with a degree in recreational therapy, who is co-captain of the U.S. men's national goalball team that will compete in the Paralympic Games this summer in Tokyo.

The student recipient of the Breaking Barriers Award will be Michaela Sykes, a senior recreational therapy major from Philadelphia, who is president of the Recreational Therapy Club at SRU and a student worker in the SRU Office of Disability Services. The employee recipient will be Deborah Hutchins, associate professor of parks, conservation and recreational therapy. These awards are annually given to a graduate or undergraduate student and a faculty or staff member who demonstrate advocacy, leadership and empowerment in the area of reducing contextual barriers for individuals with disabilities at SRU. 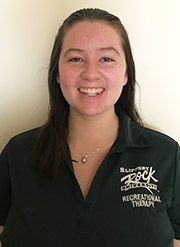 "This is our chance to recognize the accomplishments individuals have made in breaking down barriers that prevent individuals with disabilities from fully participating in every aspect of society," said Kevin McCarthy, SRU senior business intelligence analyst, who serves as co-chair of the PCDI. "Calahan is a laudable example of how someone with a disability can perform at the highest level of every field, including sport, an area of life that is too often closed off to people with disabilities. We look forward to having Calahan share his unique story, not just as someone with a disability, but as a successful alumnus that is currently breaking down barriers."

Young will share his story about making the U.S. men's national goalball team in 2018 and preparing for the Paralympic Games, which were originally scheduled for 2020 but were postponed to August 2021 because of the COVID-19 pandemic.

Goalball is a sport played by teams of three visually impaired athletes who throw a ball that makes a noise at an opposing team's goal. Young, who has a genetic retina condition called retinitis pigmentosa, will be making his first appearance at the Paralympics, a dream of his since he first started playing the sport in 2007 when he was in high school and as a participant in a sports camp hosted at SRU for visually impaired athletes.

Young currently lives in Fort Wayne, Indiana, where he is training with his team. As an SRU student, Young minored in adapted physical activity and was the president of the Goalball Club Team at SRU, which featured students with and without visual impairments.

"SRU gave me so many different opportunities and I was able to utilize so many different resources," Young said. "I was able to grow and learn and I still have all the skills that I took from those experiences and kept my edge (as a goalball player) while I was in school. A lot of people don't have the opportunity or a place where they can train."

Young will be the cover story in the next issue of The Rock magazine that will be published in June.

To attend the Breaking Barriers event, email jessica.hall-wirth@sru.edu to request a link to the Zoom meeting. More information about the PCDI is available on the SRU website.