SRU selects Brooklyn Graham as its next student trustee 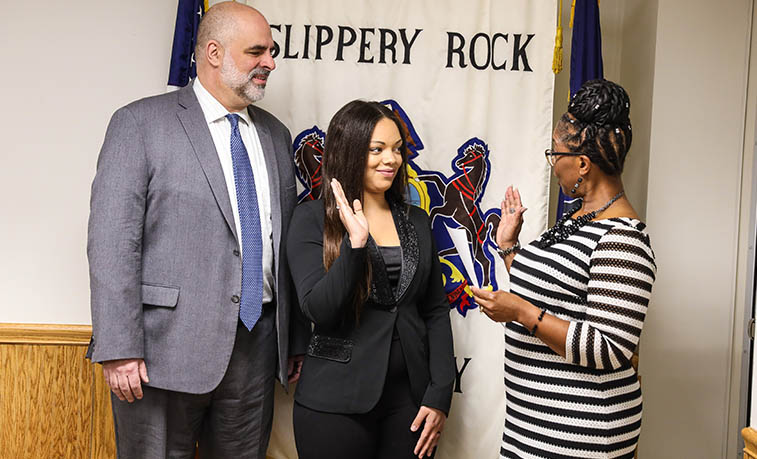 From left, Slippery Rock University President William Behre attends a ceremony in which Brooklyn Graham, a junior political science major, was sworn in as a member of the SRU council of trustees by Shannon Young, administrative assistant in human resources and notary public of the University, April 27, at Old Main.

SLIPPERY ROCK, Pa. — Brooklyn Graham, a Slippery Rock University junior political science major from Kittanning, will be joining the SRU council of trustees as its next student trustee. Graham was selected to fill the one seat on the 12-member COT designated for a full-time SRU undergraduate student. The student trustee has the same voting privileges as other trustees.

After a campuswide application and interview process, SRU President William Behre approved the Student Trustee Selection Committee's recommendation and forwarded it to the Office of the Chancellor of Pennsylvania's State System of Higher Education, with Graham's appointment approved by the state's board of governors at its April 14 meeting. Graham was officially sworn in during a ceremony, April 27, at Old Main.

"I was thrilled to accept the recommendation," Behre said. "Brooklyn is one of the strongest students that I've had the privilege to work with and we're excited to have her contribute to leading the University and continue to provide a voice for the students on the council of trustees."

"I'm honored and excited to advocate and represent students on a larger level," Graham said. "I've already been doing this behind the scenes, so this feels like a natural, progressive step in my journey at SRU."

Already active on campus, Graham is a member and research assistant for the President's Commission on Race and Ethnic Diversity, a teaching assistant and peer leader for seminar courses, academic coach in the Center for Career and Academic Progress, a Jumpstart mentor for the Office for Inclusive Excellence, and she is an executive board member for a student organization, the Black Action Society. On the state level, Graham was a working group member on the chancellor's committee to review First Amendment policies across Pennsylvania's State System of Higher Education.

Graham will replace Samantha Hawk, who will complete her term when she graduates next week. Graham's first quarterly meeting as a student trustee is June 2-3. She said she is eager to embrace the challenges, which includes addressing a transition in leadership at SRU with Behre's retirement next year, as well as keeping higher education affordable, and providing the necessary services and resources needed for student retention.

"The selection of the next president is going to be a really important choice, and I'm excited that I'll be able to put my opinion and our students' opinions into what will make a good president for this University," Graham said. "If there are any concerns that need to be expressed at that higher level by the students, I will be the mouthpiece. I'm open to listening to students from a variety of areas on campus, and not just one or two, and then taking that feedback and representing it. (The feedback is) not always my own opinion, but really trying to think of others."

The Student Trustee Selection Committee at SRU consists of three employee union representatives and a representative from the Slippery Rock Student Government Association. More information about the student trustee selection process is available on the SRU website.