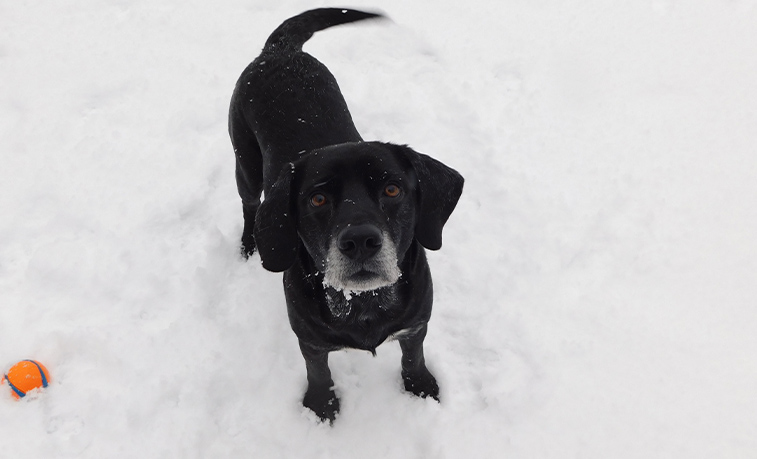 Chevy, a black lab/beagle mix, is a therapy dog that assisted Slippery Rock University researchers who studied the effects of animal-assisted therapy on inmates at SCI-Cambridge Springs.

SLIPPERY ROCK, Pa. — One of the difficulties for people who have been on lockdown during the coronavirus pandemic was how to cope with the death of a loved one. Funeral services have been postponed and individuals were left to grieve in isolation. A study by a faculty-student research group at Slippery Rock University may have an answer to the grieving part of the equation via animal-assisted therapy, although their research focused on a specific population that has been isolated for entirely different reasons: prison inmates.

"We take for granted person-to-person contact when we lose somebody in our life," said Yvonne Eaton-Stull, assistant professor of public health and social work. "We have physical comfort and we can go to funerals, but individuals who are incarcerated, they don't get that. Sometimes they get a phone call or a chaplain tells them (about the death of a loved one)."

Eaton-Stull has led similar interventions at SCI-Mercer and SCI-Cambridge Springs for inmates with other mental afflictions, such as those diagnosed with anxiety or susceptible to self-harm. She decided to lead another intervention targeting bereavement.

Joining Eaton-Stull were two SRU students, Janel Jones, a senior dual criminology and criminal justice and social work major from Pittsburgh, and Francine Lilien, a senior public health and social work major from Pittsburgh. Beginning in the spring 2019, they traveled to SCI-Cambridge Springs once a week for six sessions with a total of 32 incarcerated women. There were four groups, two that met with therapy dogs and two control groups that did not.

The inmates took pre- and post-assessment tests that measured their levels of bereavement and prolonged grief disorder. They were also administered worksheets to help them express their emotions.

"(Inmates) can't express themselves because if they show too much emotion, then it can be viewed as a weakness in a prison setting, so this type of therapy allows them to properly deal with their emotions," Eaton-Stull said. "We had them measure on a scale their severe feelings of separation from a loved one, symptoms like feelings of loneliness, crying and longing."

The two licensed therapy dogs that interacted with inmates for the animal-assisted therapy groups were a Cavalier King Charles spaniel named Murphy and Eaton-Stull's dog, Chevy, a black lab/beagle mix.

"I didn't know what to expect going into a prison for the first time," Jones said. "(With my fields of study) this gave me a great opportunity to actually experience people who are incarcerated and see for myself what it's like, instead of my perceptions from what I see in the movies."

"Sometimes we forget that (inmates) are humans too and they deserve to feel appreciated and to express their feelings out somehow," Lilien said. "It was such a great experience because I was really able to see the positive results of using animal-assisted therapy. The inmates received a lot of social support and they could really process and share their feelings."

In the past year, the SRU researchers presented their findings at the Forensic Rights and Treatment Conference in Harrisburg and at the National Organization of Forensic Social Work Conference in Las Vegas.

"I was nervous presenting but after talking to the social workers they didn't really notice that we were students; they made us feel like we were already in the industry," Jones said. "People were interested in the findings and I enjoyed being able to have that experience.

"I benefited from (faculty-student research) because I got to work closely with a professor and gain valuable experience in the process."

"Dr. Stull is amazing to work with," Lilien said. "She walked me through everything, including the facilitation of the grief group. It was nice communicating with her and building that connection throughout an experience like this."

In addition to helping the SRU students and the inmates, the findings could have a lasting effect on the treatment options for people who are grieving.

"The dogs were very responsive to the emotions of the inmates and in comforting them," Eaton-Stull said. "I think it's pretty exciting because if we can enhance treatment by introducing therapy dogs, that can have an impact on positive mental health in the future."

For more information about the social work programs at SRU, visit the Social Work Department webpage.