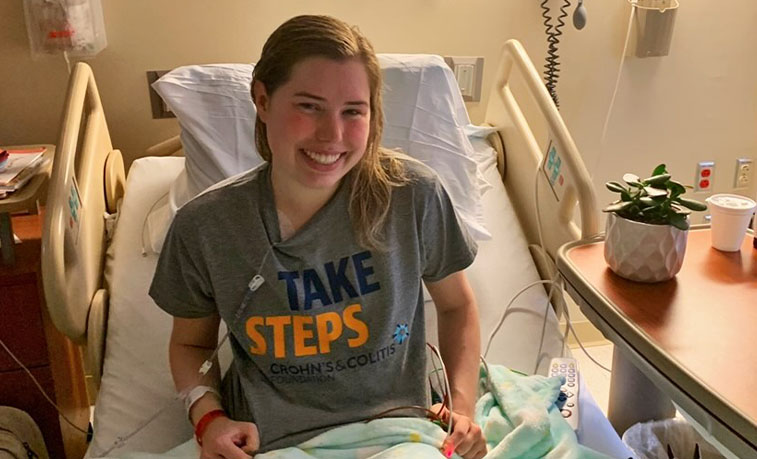 Hospitalized several times during her college career, Slippery Rock University student Jaclyn Lenhart has used her battle with Crohn’s disease to become an advocate and volunteer for the Crohn’s & Colitis Foundation.

SLIPPERY ROCK, Pa. — The transition from high school to college hasn't been easy for Jaclyn Lenhart. She has been in and out of classes and colleges about as frequently as hospitals, with at least 10 stays of up to two weeks since she was diagnosed with Crohn's disease at age 17. Lenhart, a Slippery Rock University junior recreational therapy major from Gibsonia, hasn't let the burden of her illness keep her from lightening the load of others who suffer from Crohn's and ulcerative colitis, collectively known as inflammatory bowel disease.

"I just needed to find purpose in this, and I knew that there was something that had to come out of this disease that was good," Lenhart said. "I've found that purpose through the Crohn's and Colitis Foundation, summer camps, support groups and fundraising walks."

Lenhart was recently recognized by the Crohn's & Colitis Foundation Western Pennsylvania/West Virginia Chapter as a 2021 Take Steps Adult Honored Hero for her advocacy and volunteer work.

"I've been able to help others who have gone through the same thing as me not feel so alone," Lenhart said. "Whenever I was diagnosed, I didn't know anyone else with Crohn's disease, but now I can be that person for someone else."

Approximately 1.6 million Americans currently have IBD, and as many as 70,000 new cases of are diagnosed in the U.S. each year. The severity of the symptoms varies for people with Crohn's disease, which is a chronic, inflammatory disease of the gastrointestinal tract. There is no cure or known cause of the disease. 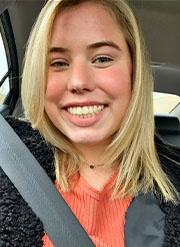 "Some people (with Crohn's disease) go on medication right away and they are completely fine, and then other people just can't get into remission and the disease severity is so bad that they become malnourished, dehydrated and end up in the hospital," said Lenhart, who falls into the latter category. "I take medication every day, I follow a pretty strict diet and I also get infusions twice a month which requires receiving about six hours of IV medication. The majority of my hospital stays are usually due to my being unable to eat, dehydration or severe pain.

Earlier this semester, Lenhart was hospitalized and placed on a feeding tube because she was unable to eat. But Lenhart doesn't see her plight as a reason for despair. Instead, she sees opportunity. After getting involved with the C&CF three years ago, she raised more than $5,000 for the organization's Take Steps fundraising walk in 2018 and served as a counselor for Camp Oasis, a residential summer camp program for children with Crohn's disease and ulcerative colitis.

"I was excited to be recognized (as Adult Honored Hero) because I'll get to speak at this year's walk and share my story," Lenhart said. "I want people to know that even though Crohn's is such an awful disease, it doesn't mean that I can't live a normal life and no matter what comes at me, I can fight it. I believe a cure is coming during my lifetime with all of the new research and contributions, but until then, people's quality of life can be improved upon."

Through her battle with Crohn's disease, Lenhart also found a career path. After initially enrolling at Messiah College, she left after one semester and took classes at the Community College of Allegheny County. While on medical leave from her studies, she observed the impact that recreational therapists had on hospitalized patients like her and decided to purse that as an occupation.

"I fell in love with (recreational therapy))," Lenhart said. "SRU has one of the best departments in the nation and Slippery Rock is somewhat close to home."

Although her first semester at SRU, spring 2020, was disrupted by the COVID-19 pandemic, this past academic year still allowed her to become involved with campus life, participating in a service sorority, leading a Bible study group and becoming active with the Recreational Therapy Club. She's done this all while continuing to have bouts with Crohn's disease and experiencing joint swelling and stomach aches.

"I definitely had my hands full," said Lenhart, who was last hospitalized in April 2021. "I developed a lot of relationships and I'm really involved on campus. My professors have been amazing in dealing with my health situation and the Office of Disability Services has been very accommodating. I've had to miss a lot of class because of my infusions and sick days, but I've been able to communicate with my professors and everyone's been very helpful to provide the resources that I need."

The C&CF Western Pennsylvania/West Virginia Chapter's Take Steps fundraising walk is June 13, in the Gold Lot outside Heinz Field in Pittsburgh. The event is free and open to the public. More information is available on the C&CF website. More information about the recreational therapy program at SRU and the Office of Disability Services are available on the SRU website.