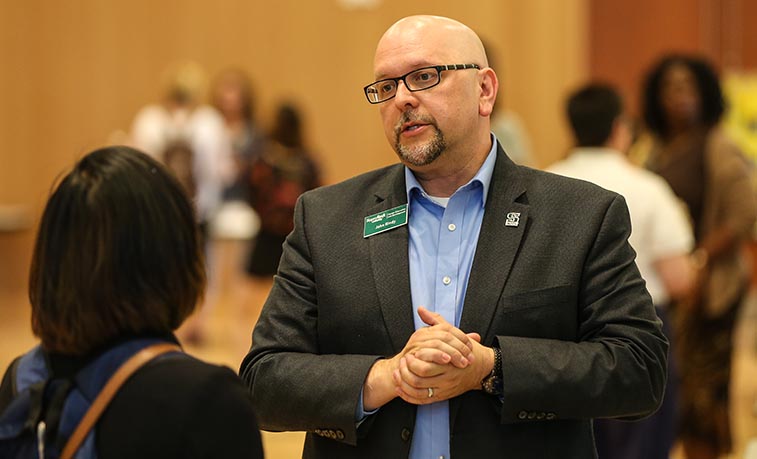 John Rindy is providing leadership for a new subdivision at Slippery Rock University called the Center for Career and Academic Progress that consists of four existing campus units.

SLIPPERY ROCK, Pa. — The formation of a new subdivision at Slippery Rock University might seem like just a name change and a restructuring of the organizational chart, but it signifies progress in the way SRU is serving its students. The University recently created the Center for Career and Academic Progress that consists of four existing campus units, one of which has undergone a name change.

The CCAP, under the umbrella of Enrollment Management, now includes the First National Bank Office of Career Education and Development, the Office of Distinguished Scholarships and Fellowships, the Success Coaching program and the Department of Exploratory Studies and Academic Progress, which was previously known as Academic Services.

"All of these areas have worked collaboratively in the past but we are all laser focused on two things," said John Rindy, the former director of career education and development who is now providing leadership for the new center. "Those two things are getting students to set goals and helping them build relationships, both as they specifically relate to their academic lives."

CED provides personal coaching appointments and career resources, as well as helps students and alumni with career management and related questions, from choosing a major at SRU or planning for graduate study to professional job searches.

In 2017, CED took over the Office of Distinguished Scholarships and Fellowships, which supports students applying for highly competitive, merit-based national and international scholarships and fellowships.

The Success Coaching program, created in 2017 under the Office for Inclusive Excellence, officially moved under the direction of CED earlier this year. Success coaches meet one-on-one with students or in workshop settings to empower them refine study strategies, set academic priorities, connect them to campus resources and guide them to desirable academic outcomes.

The Department of Exploratory Studies and Academic Progress will continue to perform many of the functions of Academic Services, which includes readmissions, the coordination of academic advising for exploratory students, oversight for tutorial support, coordinating learning clusters and leading the first-year seminar courses known as FYRST. However, this area will make enhancements that further align with the strategic intensions of the CCAP.

"Many people struggled to define what 'services' were," Rindy said. "The name Academic Services was not specific and it implied a transactional mindset. We want to instill a bias toward action among students, especially students in the exploratory major. The new name defines what the department actually does instead of having a vague, catch-all term, and it centers the actions within a framework that promotes persistence to degree completion, relationship-building and goal-setting."

The physical location of each unit within the CCAP will remain the same, with everyone located on the first floor of Bailey Library, except the success coaches, who are in Patterson Hall. That setup will eventually change when the entire CCAP will move to the University Union once renovations to that building are completed in the coming years.

However, the timing of the creation of the CCAP is ideal now because of the respective units' recent integration of assessment strategies and the use of similar tools, such as software products that drive decisions and identify students for outreach. Another tool being applied broadly throughout the new center is an approach to career planning called Life Design, or Designing Your Life. Rooted in the Stanford University Life Design Studio process, CED has been using DYL in its career coaching, and recently, several faculty members have engaged in training on the approach to implement into their FYRST courses.

"We're creating a center not to just consolidate resources but to align our strategic intentions that are driven by the same core values," Rindy said. "While this is only the beginning, this group of professionals is poised to create conduits to students' degree completion."

More information about CED, Success Coaching and the Department of Exploratory Studies and Academic Progress is available on the SRU website or by calling CED at 724.738.2028 or emailing career.education@sru.edu.