Stone Helsel, a Slippery Rock University junior secondary education: social studies major from Mercer, stands near the historical marker for Pandenarium, a former settlement for escaped slaves during the 1850s located near his home in Mercer County.

SLIPPERY ROCK, Pa. — Juneteenth is a federal holiday commemorating the emancipation of enslaved people in the United States and the anniversary of the news reaching Texas on June 19, 1865. But refuge and freedom from bondage was realized for many former slaves who reached Pennsylvania decades prior on stops along what is known as the Underground Railroad. A Slippery Rock University student heard about such settlements in his community and decided to investigate further for a research paper that became more than just a class assignment.

Stone Helsel, a junior secondary education: social studies major from Mercer, conducted research about two settlements in Mercer County in a way that was similar to a historian or doctoral student's scholarly pursuit: delving into local archives, visiting physical sites and even checking his work with experts as sort of a peer-review process.

"As a future educator, this is an example to point to and say, 'This is local history and it happened in our own backyard,'" Helsel said. "A lot of times with the Civil War and the anti-slavery movement, a lot of students put it in geographic boxes, and even how we talk about it in popular media, movies and history classes, there's a narrative of the North (being) good and the South (being) bad. A lot of it is more nuanced than what is explained in schools and displayed in popular culture about the role of whites in some of these social reform movements and the slavery debate. 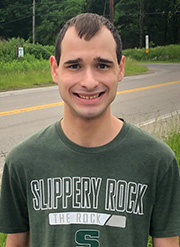 "The North was not this integrated utopia and once (former slaves) get there, you're going to be free and have an easy life. There was a struggle for freedom for runaway slaves and they lived hard lives."

Helsel's paper, titled "The Limitations of White Allyship in Antebellum and Reconstruction era Mercer County, Pennsylvania," was written for his Historian's Craft class in spring of 2021 and it received this year's Kelly Prize for undergraduate research, awarded by SRU's History Department.

"I require my students to look at Pennsylvania because students are so often focused on national historical events and don't realize how history is close to home," said Melissa Ford, assistant professor of history who teaches the Historian's Craft course. "This research is very challenging because local history is often buried in a box somewhere in a library or in hard-to-find newspaper archives. Local historians often work twice as hard, which Stone discovered.

"But he asked the big question most historians ask: 'Why?' In the Civil War period, what was going on in western Pennsylvania and why would hundreds of former slaves settle here?"

In his research, Helsel focused on two settlements in Mercer County: Liberia, near present-day Stoneboro, which was an Underground Railroad stop for hundreds of runaway slaves from 1825-50; and Pandenarium, between Volant and Mercer, where more than 60 formerly enslaved people from Virginia relocated in 1854.

"There was progress but there were also limitations," Helsel said. "I could have written the paper about either side. Even a lot of the whites who were against slavery, they weren't living side-by-side in these communities. There was still segregation."

Helsel also identified the federal Fugitive Slave Act of 1850 as tempering freedoms of formerly enslaved people in the area. This legislation imposed harsh penalties of $1,000 fines or six months in jail for assisting the extradition of fugitive slaves from the South. The act led to the demise of Liberia as former slaves there fled to Canada. According to Helsel, most local abolitionists and white allies found the ramifications of the Fugitive Slave Act to be too risky, despite strong anti-slavery activism that was rooted in religion.

Local churches, including the Neshannock Presbyterian Church, were previously divided on the Christian response and the indifference and silence from the pulpit on the immorality of slavery. A local activist named John Young, who originally hailed from a slave-holding family in Maryland, joined half of the laity from NPC to form the White Chapel near the future site of Pandenarium. Young was among those who contributed to the building of the settlement on land purchased from the estate of Charles Everett, a wealthy plantation owner in Virginia who upon his death arranged to have his slaves freed to Mercer County.

Despite the efforts of many abolitionists during this time, Helsel found evidence of racism in his research, including comments made by Young, as Helsel noted in his paper that "being anti-slavery does not equate to being anti-racist."

Helsel said he had an awareness of Black history but he never studied it in depth, and he found that most of the academic research focused on the South instead of the North.

"It's important to study this because it shows why our present communities are constructed how they are," Helsel said. "Especially as a (future) teacher, one of my responsibilities is making history relatable and tactile to students. It's not just an abstract thing about the vision Abraham Lincoln had for the United States being a country where no matter your race, people are considered equal. You must point to examples about what people did."

"(Researching) local history is essential because the national, top-down histories don't reflect the complexities of interpersonal relationships, regional differences and influences, and complicated approaches to race, class and gender," Ford said. "Especially for the Antebellum and Civil War period, we have to look beyond the Yankee North vs. the Confederate South and examine the complicated, and often uncomfortable, local histories in between. Stone did just that using a tireless and innovative approach."

More information about the secondary education: history/social studies program and the history programs at SRU are available on the University's website.