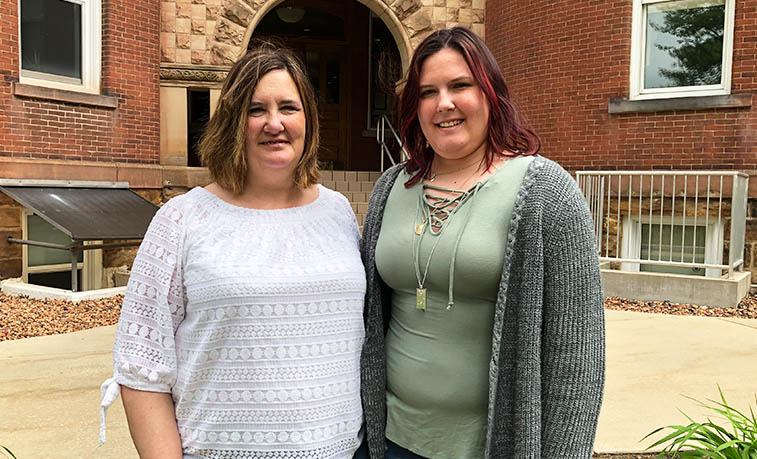 From left, Brenda Matthews and her daughter, Nicole, are one of two sets of mother-daughter duos enrolled in Slippery Rock University’s online degree completion undergraduate program for philanthropy and nonprofit management.

SLIPPERY ROCK, Pa. — Mother knows best, as the saying goes, but that doesn't mean she can't learn a thing or two by following in her daughter's footsteps. Case in point: a pair of mothers of students from Slippery Rock University's philanthropy and nonprofit management program decided to join their daughters and earn the same degree.

"These young women are blazing a trail and now their mothers are walking that trail," said Alice Del Vecchio, assistant professor of interdisciplinary programs, who is the philanthropy and nonprofit management program coordinator. "A lot of (mothers) think, 'My opportunity has passed me by,' but these daughters showed them the opportunity was still there. I think that's cool."

"I was thinking it's my turn to go back," said Brenda Matthews, who works remotely as a full-time court transcriptionist for legal systems in Colorado and Massachusetts. "It's easier for me to take classes online, but it's hard to find online programs that don't cost a fortune. I was of course familiar with Nicole taking the program and I found it easy to schedule classes and be in touch with the instructors."

Brenda and Nicole Matthews lived in Pittsburgh until 2005. Following several moves, Nicole graduated from high school in Arkansas prior to returning to western Pennsylvania. She would attend a pair of universities in the Pittsburgh area, before another move took her family to Georgia. Nicole was diagnosed with four autoimmune disorders, including lupus, and recently had gallbladder surgery, all of which made managing an on-campus class schedule difficult, but her 3.85 GPA is proof of her academic success through SRU's online program.

"I like the stability (of being on track to graduate) and the flexibility; I'm able to do the work on my own time, or when I'm not feeling 100 percent, and I can work around doctors' appointments," said Nicole, who, for credit transfer purposes, enrolled as a management major with a minor in philanthropy and nonprofit management. "I always wanted to work in (the nonprofit sector) and then I saw (SRU) had this program. Not a lot of schools have it as an undergraduate program and even fewer offer it online."

A lot of the work is project-based with practical, hands-on experience that is achieved remotely for online students in their own communities. For example, in the Civic Engagement and Community Decision-Making class, students may address the opioid crisis and analyze policy in their community and discuss what they learned from their local officials with other online students and how they can advocate for political and social change.

"I like to help people and I'm more creative and hands-on," said Nicole, who has gained an understanding of developing nonprofit organizations, from budgeting and program development to public relations and marketing, including designing brochures and writing news releases. "You see a project all the way through from start to finish and are able to watch it build upon itself."

Nicole, who has set high standards for her mother, said their family is competitive, but supportive. Brenda would be the first of her five siblings to get a college degree and some of her family members had concerns that she was doing too much.

"I absolutely want to get better grades than her, but it's really hard; there's a lot of writing," said Brenda, who attended community college as an accounting major 30 years ago but didn't complete her first year. "Some of my family told me I was trying to do too much and some days it felt like that, staying up until 3 a.m. trying to get the work done because I was doing other things, but I'm doing this for me. I'm not doing it for them. This is what I want to do."

Brenda, who plans to continue her work-from-home job as a typist, said she is "itching to get out of the house" now that her two daughters are finishing up college. She has another daughter, Megan, who graduated from the University of Central Florida, Daytona Campus, last year and is currently a critical care nurse. Brenda wants to launch a nonprofit organization to help families gain access to health care services.

Similar to Brenda watching the success Nicole had in the SRU program, Kimberly Almedina, a full-time nurse, noticed how well her daughter, Maria, progressed through SRU's online program as Maria was working as an English teacher in South Korea.

"(Kimberly) said, 'I saw how excited my daughter was about this program and that sold me,' Del Vecchio said. "It's really neat that (both mothers) are doing what their daughters did. A lot of times the daughter does what the mother did. That tells you about the role of young women in our modern society. Maybe in the past the daughter looked to the mother for everything. Now there are mothers, who, for one reason or another, couldn't go to school, maybe it's because they were raising that daughter, and now they begin to model themselves after that person that they helped raise."

That's not to say times have completely changed. Del Vecchio encountered a similar life experience after her own mother passed the General Educational Development test in 1971, the same year Del Vecchio graduated from high school.

"In some weird way, seeing these young women sort of mentor their moms brings back this memory of my mom getting her high school diploma," Del Vecchio said. "It was this thing undone and she didn't want to leave it undone. That's in some way how these women are. It's never too late."