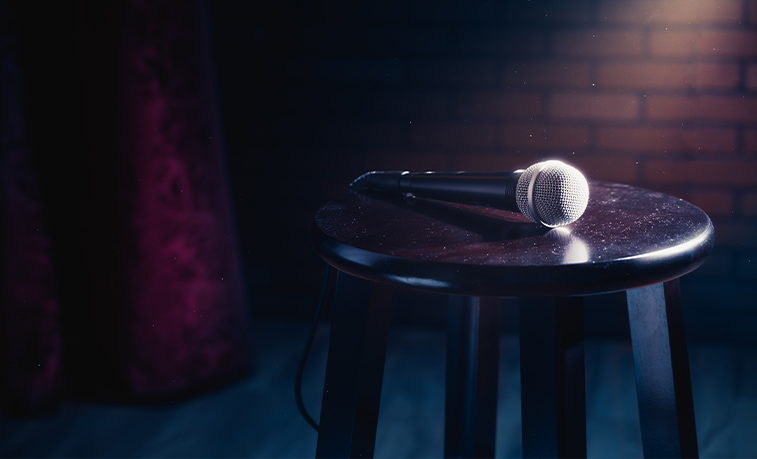 Ongoing philosophy research by a professor at Slippery Rock University led one student research assistant to explore the relationship between stand-up comedy and the physical space in which it is performed.

SLIPPERY ROCK, Pa. — Did you hear the one about the philosophy researcher who liked stand-up comedy? That question is not a ploy to deliver a punchline. There indeed was a philosophy study at Slippery Rock University that looked at how stand-up comedy might be funnier depending on the performance space. In other words, a "tough room" might actually be the result of the room and not the audience.

Unlike scientific research that uses a method to test results, philosophical research doesn't necessarily arrive at a definitive conclusion, but this type of inquiry can lead to objective ideas.

"We're asking if there is a reality to this thing that we call 'atmosphere,' or is it just some wishy-washy feeling that people have that's really subjective," said Thomas Sparrow, assistant professor of philosophy. "As philosophy researchers, we want to know if there actually is something that's objective (to physical spaces) or if it's just people expressing their feelings."

As Sparrow invited student research assistants to further explore the topic, they were also allowed to pursue their own interests, like one student's affinity for stand-up comedy.

"I've been very interested in stand-up comedy for a long time, but I never had a way to link it to philosophy," said Aleks White, a 2020 SRU graduate with a degree in philosophy. "But when I took a phenomenology course I realized that I could make that connection." 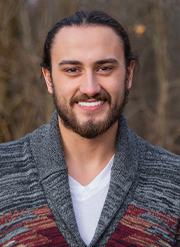 In spring 2019, White was inspired by a paper he wrote in Sparrow's class, Existentialism and Phenomenology. Phenomenology is an area of research that focuses on the commonality of a lived experience within a particular group.

Sparrow had been conducting ongoing research about aesthetic identity and the relationship between physical environments and identity. Last summer, Sparrow invited White to become his research assistant as part of SRU's Summer Collaborative Research Experience grant.

White explored texts from German philosophers that included Martin Heidegger's Being and Time, and his phenomenological conception of Dasein, as well as Gernot Böhme's book, Atmospheric Architectures.

Sparrow's research, meanwhile, delved into the idea of space and how physical places shape the identity and the wellbeing of their inhabitants.

"Have you ever been somewhere, like a workplace, and noticed how unpleasant or oppressive it is?" Sparrow said. "Most people say, 'Yeah, I've been there,' well, my intuition is that we shouldn't build places like that or make people spend so much time there. My question is, 'What is it about a space or a place that that enhances our well-being?' and conversely, 'What kind of places decrease or harm our well-being?'"

As part of the research, White and Sparrow visited Fallingwater, the house in southwestern Pennsylvania designed by renowned architect Frank Lloyd Wright.

"(Wright's) buildings have an organic relationship with the land that they were built into," Sparrow said. "But he was an architect who believed that the building itself, particularly the interior, should dictate the way it's lived in and the behavior of the inhabitants.

"Aleks then took that knowledge to think about stand-up comedy, and if there is some sort of organic relationship between a comedian's performance and the kind of venue and space where it happens."

Whereas Sparrow's research was broader, looking at everything from theater sets to workplaces, White focused on comedy clubs.

"If people are going to a comedy club, they want to be amused," White said. "Comedy clubs in general are designed as tightly packed rooms. There's an added component with a comedian trying to achieve a collective enchantment of the audience and some larger spaces with high ceilings, like a big auditorium, wouldn't be as conducive for comedy."

White also studied the reputations of comedy clubs as well as environments with potential interfering noise. Still, there are some comedians who can perform in arenas or large concert venues.

"You can have the same comedian perform in an intimate atmosphere and then if they perform in an impersonal venue, it can take away that intimacy that could undercut the success of their jokes," Sparrow said.

In addition to the literature related to Sparrow's research, White explored the theory of comedy called the benign violation theory, which predicts humor occurring when certain conditions are present, as well as ways an audience can enhance or diminish the experience of seeing a comedian in a comedy club.

Although not an aspiring comedian, White plans to pursue a master's degree in film studies and said the experience enhanced his understanding of the research process.

"The (philosophy) research process is a little bit different than it is in the sciences, so it didn't lead to a particular conclusion as much as it helped us gain greater clarity and confidence in our hypothesis," Sparrow said. "(We learned more about how) everyday environments have a significant impact on who we are and what we can do."