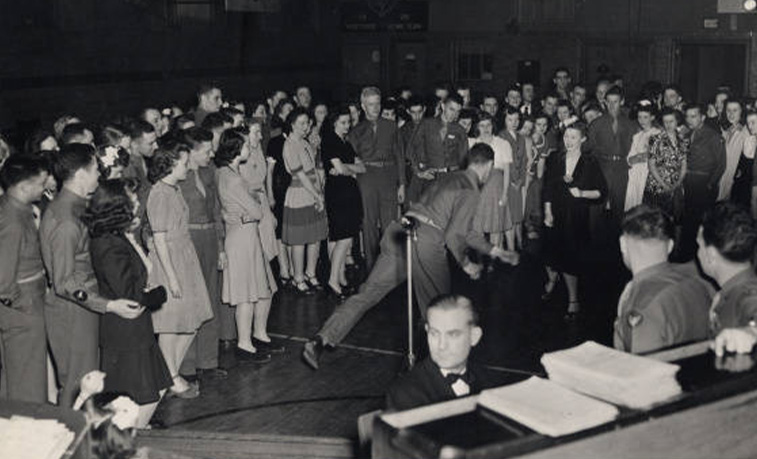 Cadets in the U.S. Army Air Corps flight school stationed in Slippery Rock attend a school dance in 1943 with students at then Slippery Rock State Teachers College, which consisted of 185 female students and two males. (Photo courtesy of SRU Archives)

SLIPPERY ROCK, Pa. — The COVID-19 pandemic isn't the first time Slippery Rock University or the state of Pennsylvania had to respond to a global crisis that completely changed the way people functioned in their daily lives.

During World War II, enrollment at what was then Slippery Rock State Teachers College dropped to just 187 students, nearly the same total as when the University first opened its doors in 1889. In the fall of 1944, all but two of the students were women.

"If you snapped your fingers and traveled back in time to 1944, everything would've seemed very quiet," said Alan Levy, professor of history. "There was little surplus money or resources available for any kind of frivolity. Everybody was encouraged not to drive automobiles in order to ration fuel. There were many more women on campus because most of the men, if they were draft age, were off fighting in the war."

However, from April 1943 to February 1944, the campus became home to a U.S. Army Air Corps training site, with more than 500 cadets stationed in Slippery Rock. While no flight instruction took place on campus, there were basic training drills, as well as academic instruction in classes such as modern history, geography and physics, which were taught by SRSTC faculty who would have otherwise been furloughed with the dramatic drop in enrollment.

"Colleges were a natural place for the armed forces to organize various kinds of training programs," Levy said. "(Cadets) could take a course in chemistry or physics that went along with their military training. It was a logical thing to situate in a place where you could easily have somebody there to teach, and colleges had dormitories that were previously filled but were now empty."

According to the Air Corps flight school's newspaper, The Flyin' Rapier, many cadets felt like their time in Slippery Rock seemed more like a college experience rather than military training. After all, they lived in South and West Halls and participated in social functions with the mostly female student population.

By the fall of 1945, enrollment at SRSTC rebounded to 284 students. That total did not include the more than 50 nurses who trained at the college as part of a government-sponsored program.

It was a classic example of people combining their resources for a common cause, and it happened across the state. Kaya Weeks, a senior secondary education-social studies/history major from Mainesburg, learned more examples while conducting research last fall in an SRU class called Historian's Craft. Inspired by World War II artifacts found on the website HistoricPittsburgh.org, Weeks wrote a research paper titled "Pennsylvania During World War ll: How Two Cities Helped Achieve Victory." 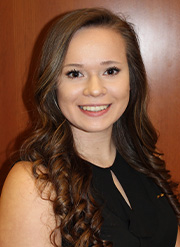 "There was a huge sense of pride and contributions from Pennsylvanians during World War II," Weeks said. "Pennsylvania's governor at the time, Arthur James, said 'Let us make industrial Pennsylvania the arsenal of America,' and from the research that I did you can definitely see that by what Pennsylvanians produced in World War II. You had Pittsburgh steel that was transported to Philadelphia to make and repair naval ships, among many other examples."

In Butler, the prototype for the Jeep was developed by American Bantam Car Company as the U.S. Army had a need for a vehicle to haul soldiers and heavy artillery. Bantam produced some of the Jeeps but with the help of other manufacturers, such as Ford using Bantam blueprints, there were more than 600,000 Jeeps contracted by the Army during World War II.

Weeks found that Pennsylvania's contributions weren't just arsenal but men and women from Pennsylvania serving at home and abroad. Uniontown native Gen. George C. Marshall, the U.S. Army chief of staff during World War II, is perhaps the most famous. Later, as secretary of state, he developed the U.S.'s European Recovery Program known as "The Marshall Plan." There were several other high-ranking officers from Pennsylvania, including Lt. Gen. Joseph McNarney, from Emporium, and Gen. Jacob Devers, from York, but Weeks also noted in her research how Pennsylvania was among the top states for voluntary military service.

"Pennsylvanians did a lot, especially women," Weeks said. "There were more than 400,000 women who volunteered for the military service from Pennsylvania, the state added 15,000 women to the industrial movement and there were a lot of branches of military specifically designed for women, like the Women's Army Auxiliary Corps. Those were huge starts for women in the military because that wasn't really heard of too much before (World War II).

"Learning about all this brought me a sense of pride because I'm from Pennsylvania and it was really interesting to see how people were willing to come together from all over the state."

"What's so exciting about Kaya's research is that it was sparked by one primary source (an anti-war poster she found on the Historic Pittsburgh website)," said Melissa Ford, assistant professor of history, who taught the Historian's Craft course last fall. "That sparked a question, and that's what I love to teach my students: to find that one thing that makes you ask a question and find the answer. She had a lot of fun with it and that really showed in her research.

"One of the best things we can teach our students, and especially students who will go on to become teachers, is to be passionate about their research and passionate about what they're learning."