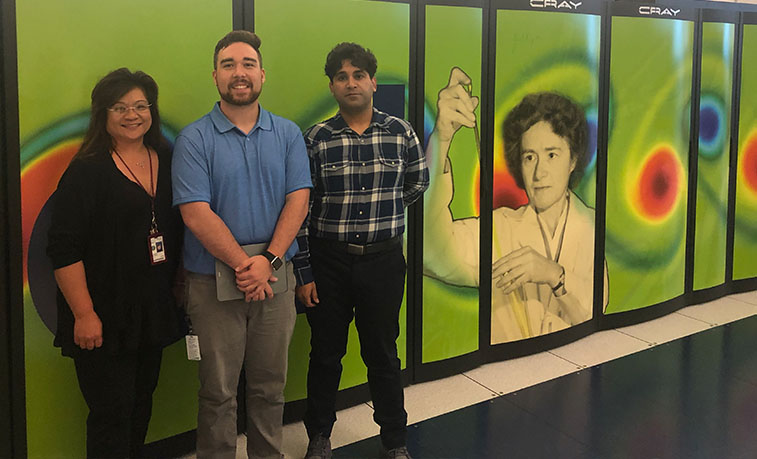 SLIPPERY ROCK, Pa. — Cory Haser has a history of adding new dimensions to his experience working with computers, having previously developed software that uses three-dimensional models. He is getting an opportunity this summer to push his 3D modeling skills to whole new level.

Together they are developing framework to apply augmented and virtual realities to cybersecurity operations for high performance computing data centers. Augmented reality is technology that superimposes a computer-generated image on a user's view of the real world from a computer screen, and virtual reality is computer-generated simulations of three-dimensional environments.

"We're combining augmented and virtual reality technology with cybersecurity and a high performance computing environment, which when compared to related studies, is a new approach," said Sukhija, who is also the director of SRU's Center for Cybersecurity and Advanced Computing. "An important challenge faced by cybersecurity specialists is managing the extreme levels of stress and finding ways to monitor, access and defend multiple cyberattacks in real time."

The idea to use augmented reality and virtual reality was born when Haser entered Sukhija's office looking to obtain research experience. Haser already works in the field as an augmented reality software engineer for D'Angelo Technologies, a small business in Zelienople that provides engineering solutions for military, civil and commercial clients.

Sukhija and Haser received several grants, including $4,759 through SRU's Summer Collaborative Research Experience grant program, to conduct their research at NERSC, one of the largest facilities in the world devoted to providing computational resources and expertise for basic scientific research. NERSC is located at Berkeley Lab, a multiprogram national laboratory managed by the University of California for the U.S. Department of Energy's Office of Science. SRU has an existing relationship with Berkeley Lab after Sukhija led a project where three SRU students are spending the summer to conduct separate research.

The new project involves the use of augmented reality to assist with cybersecurity at large data centers like NERSC. The software application they are developing will help cybersecurity specialists navigate the data center and provide visual markers superimposed on screen to detect and find computing parts, such as memory and data processors, or the compromised server itself from the stacks of data servers in the event that a person is unable to physically be at the data center while conducting an investigation. The researchers are also developing applications that provide a simulated, three-dimensional environment visible from an Apple iPad screen for augmented reality or from an Oculus Rift headset for virtual reality.

"This is a really innovative idea," Bautista said. "When I saw the AR software I immediately thought of our security operations. I'm in a 24/7-work environment in a data center and we started thinking about a situation where staff might be unable to be on the computational center floor, due to something like an evacuation or environmental issues. Chances are, the systems are running even when staff cannot be there. With this idea, we would be able to see what's going on in the data center in three dimensions without actually walking through it and we could possibly diagnose or prevent the problem much more effectively."

According to the researchers, having this technology would increase efficiency, eliminate risks and save time and money, especially for data centers that might not have an expert on location when hardware fails or if someone needs to pinpoint malicious activity when all they have is an IP address. For a data center like the one at NERSC, on one floor there could be as many as 14,000 nodes, or components of an HPC system, among the server stacks.

In two separate visits, Haser has spent a total of two weeks onsite at Berkeley Lab working on the project with Sukhija and Bautista. The team is presenting their research at the Practice and Experience in Advanced Research Computing Conference in Chicago, now through Aug. 1.

"It's been amazing to work at Berkeley Lab and in the cybersecurity and high performance computing environment," Haser said. "This is a little bit out of my comfort zone, but it's nice to still be able to work with technology that I'm familiar with and then combine it with something I'm interested in learning more about and potentially developing some software that people can use."

"Cory's a perfect example of how you have to apply your knowledge in other areas," Sukhija said. "He accepted the challenge and he's been great to work with."