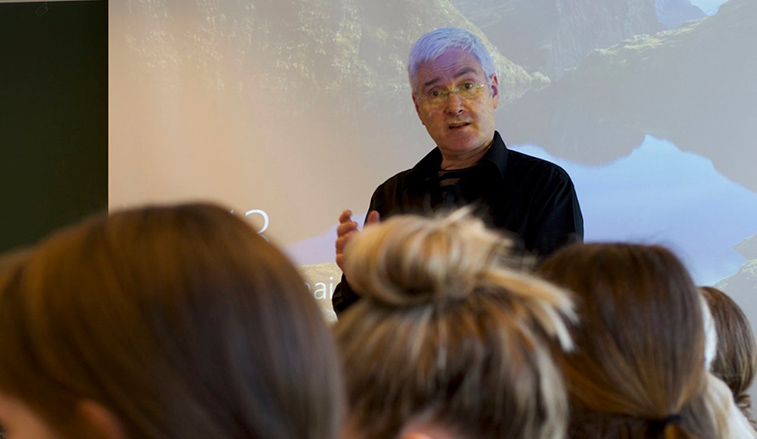 Norman Anderssen, psychosocial science professor at the University of Bergen, spoke to Slippery Rock University psychology students during an SRU faculty-led program in Norway, May 14-27.

SLIPPERY ROCK, Pa. — Scandinavian countries such as Norway, Sweden and Denmark are known for their progressive human development policies, which is why a faculty-led group of students from Slippery Rock University visited Bergen and Tromso, Norway, May 14-27, to discover for themselves what these countries are doing differently for their citizens.

"The Nordic tradition puts people first ... it's a way of life," said Catherine Massey, professor of psychology. "The objective was to provide students an international experience and learn about a country that does things right when it comes to human development."

Massey led a group of 24 students, 18 of whom were enrolled in a Developmental Psychology Honors College class last spring, on the journey. George Brown, recently retired professor of political science and former director of the Honors College, and Emily Keener, assistant professor of psychology, also accompanied the students. The group learned about biological, psychological and social development in Norway by visiting with academicians at two universities, as well as health care and education practitioners, representing everything from kindergarten to nursing homes.

"I was able to see human development across the lifespan and the treatment of people as humans, regardless of how much money they have," said Rebecca Krawczak, a senior psychology major from Pittsburgh, who is an aspiring clinical psychologist. "This was an amazing opportunity because it's directly related to human development and my studies."

According to the 2018 Human Development Report, an index released by the United Nations Development Programme, Norway ranks No. 1 among countries for several dimensions of human development, including health, education, income and equality. The United States ranks 13th, behind four of the five Nordic countries that comprise northern Europe.

"Because (Norway is) a socialized democracy, (its people) get the health care they need and the children get opportunities to own a path for what they want to do," Massey said. "Growing up in the United States, the students only see what they know and when they saw how (Norwegians) get equal treatment, that really resonated with them. Some said they'd like to take back what they learned and apply it to their own careers and fight for equality and health care."

Krawczak, who at varying times during her time as an SRU student considered a pre-law track, said her the experience in Norway strengthened her passion for psychology and influencing policy rather than "catching people after the issues have already developed."

SRU students also heard lectures and viewed presentations from Norman Anderssen, psychosocial science professor at the University of Bergen, who addressed issues related to the LGBT community in Norway; Ingeborg Veim, representing the Bergen city council's early childhood education department, who discussed the different types of kindergarten in Norway; and faculty at the University of the Arctic in Tromso, who discussed telemedicine and e-health programs. The students also visited an open kindergarten, where children are dropped off at varying times throughout the day and that is less structured than the kindergarten model in the U.S.; a nursing home, meeting with residents and discussing the nation's model for elderly care; and the Leprosy Museum, which paid tribute to Bergen for caring for the largest concentration of leprosy patients in Europe in the late 1800s.

"We are so grateful for Dr. Massey for all she did to make this trip possible," Krawczak said. "We had an incredible time and all that she planned for us; it really spoke to me. Her passion for teaching clearly extends well beyond the classroom."

The group also made time to experience Norwegian culture, as the trip coincided with the Norwegian Constitution Day celebration, May 17. Krawczak said the students had plenty of opportunities to mingle with native Norwegians.

"There were a lot of great things that were planned but I found I got a lot of insight out of simply talking to locals and getting to know their anecdotal experiences," said Krawczak, who kept a notebook and wrote down the names of everyone she met. "You'd be surprised how many people are willing to open up to you if you ask the right questions and you're willing to listen."

Krawczak's gregariousness even before she arrived at Norway helped land her an internship. During the eight-hour flight to Copenhagen before taking a connecting flight to Norway, Krawczak sat next to a director of employee services at the Nashville International Center for Empowerment, a nonprofit organization in Tennessee that helps African refugees and immigrants transition to life in the U.S. Krawczak was eventually offered an internship next summer as a case resettlement manager.

"The human experience is really special (to me) and wanting to be a clinical psychologist I have a love for people, and if you want to love people you have to get to know them," Krawczak said. "An important part of traveling, especially with a faculty-led program, is making it your own in some way."