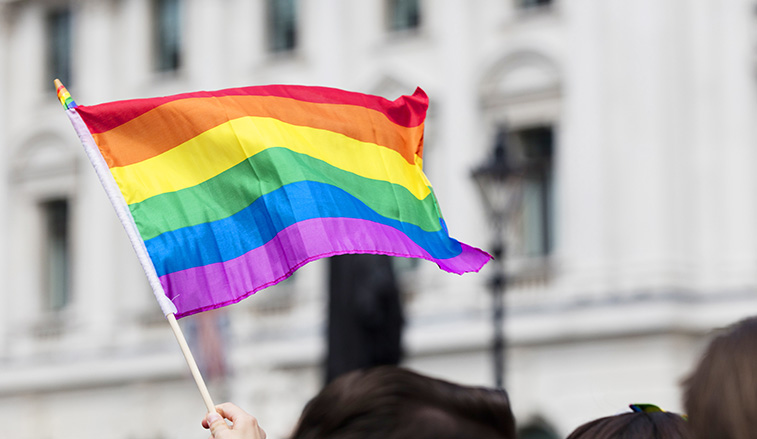 The President’s Commission on Gender Identity & Expression and Sexual Orientation at Slippery Rock University advocates for the interests of LGBTQI people at SRU, by advocating for policy, supporting programming and sponsoring initiatives like pride banners that are displayed on campus each October.

SLIPPERY ROCK, Pa. - The advocacy group at Slippery Rock University that addresses lesbian, gay, bisexual, transgender, queer/questioning, and intersex issues on campus is putting more expression into its name. Actually, the pronunciation is still the same, but the group previously known as GISO is now the President's Commission on Gender Identity & Expression and Sexual Orientation, or GIESO.

GIESO is one of seven Presidential Commissions at SRU that lead and engage the campus community with a vision to create a culture of respect, acceptance and celebration of people's differences and be active practitioners of change. Appointed by the president, students, staff, faculty and administrators volunteer their time and talents to collaborate with all campus constituents in promoting an inclusive and diverse campus community. 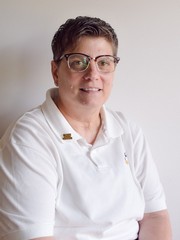 "Gender expression is an area where there is bias and discrimination and the way our society is changing we felt it was important to add expression to our name," said Jodi Solito, director of the Women's Center and Pride Center at SRU, who is a GIESO member and serves as commission co-chair. "There are people on this campus who identify as non-binary, neither male or female, or they are more fluid with their gender than what other people might typically expect. How they choose to express their identity is up to them, not us."

Gender expression refers to the way in which people express their gender identity, typically through their appearance, dress and behavior. According to Solito, discrimination exists not just against non-binary individuals but also when a female dresses like a male, or vice versa.

"As a society, we're getting to the point where it's OK to question your sex that you've been assigned," Solito said. "We're not going to pigeonhole people into either-or thinking or a pink-or-blue attitude."

GIESO consists of approximately 20 students, faculty, staff and administrators, advocates that work to move the University toward a more inclusive and supportive campus climate that is free of discrimination, intolerance and bigotry. GIESO assesses campus climate, advises University leadership on issues and recommends policy. A recent example of such a policy, one allowing students to choose a first name, instead of their legal name, to identify themselves on certain campus documents and systems, was initiated and supported by GIESO.

GIESO also supports and co-sponsors programs and initiatives with other groups such as RockOUT, the LGBTQI student organization at SRU. Examples include banners displayed on light poles along the Central Loop of campus to celebrate gender identity and equality and the annual Drag Show. This year's event is at 8 p.m., Oct. 24 in the Smith Student Center Ballroom.

Several nationally recognized campaigns will take place in October, which is LGBT History Month. Included among those is National Day of Coming Out, Oct. 11, and Spirit Day, Oct. 18. The National Day of Coming Out is set aside to encourage the voluntary self-disclosure of LGBTQ individuals, while all students are encouraged to wear purple on Spirit Day to stand against bullying and in support of LGBTQ youths.

Additionally, the first-ever International Pronoun Day will be Oct. 17 and GIESO and the Pride Center are co-sponsoring a panel discussion at 7 p.m. in the SSC theater to address the importance of recognizing peoples' chosen pronouns, such as "he," "she" or "they," for expressing their identity.

In advance of International Pronoun Day, there will be an information table in the SSC lobby, 12:30-1:30 p.m., Oct. 16, and prior to Oct. 17, where faculty and staff will be offered the opportunity to request pins showing their pronoun preference.

RockOUT will also have programming to celebrate Pride Week, Oct. 22-28, and the Pride Center will be showing four films with LGBTQI themes or characters at 7 p.m., Oct. 29-Nov. 1, in the SSC theater followed by a discussion.

The Pride Center, located on the second floor of the SSC, is a space dedicated to providing a safe, nonjudgmental environment that welcomes LGBTQI people and encourages empowerment, awareness and education.

"Having a center like this elevates the embracing nature of the University," said Solito, who joined SRU in 1997 and became the Women's Center director in 2007 before also taking over oversight of the Pride Center in 2011, which was then known as the LGBT Resource Center. "Part of the mission of the University is serving a diverse student body, and this is one of the ways that the University supports its mission."

In addition to Solito, the Pride Center is staffed by six students who have Safe Zone training and who also work in the nearby Women's Center.

"The training is a way to get people on the same page and being receptive," Solito said. "If a student comes to me and is struggling, we're able to understand, be accepting and know the recourses to which we can refer them."

Other faculty and staff have gone through the four-hour Safe Zone training, first adapted at SRU by Catherine Massey, professor of psychology, based on similar training at other institutions. Faculty and staff who have gone through the training have "Safe Zone" placards in their offices, which, according to Solito, help limit students' concerns that, even if they don't identify as LGBTQ, they will not be discriminated against.

Click here for more information about LGBTQ groups and resources at SRU, including GEISO and the Pride Center.