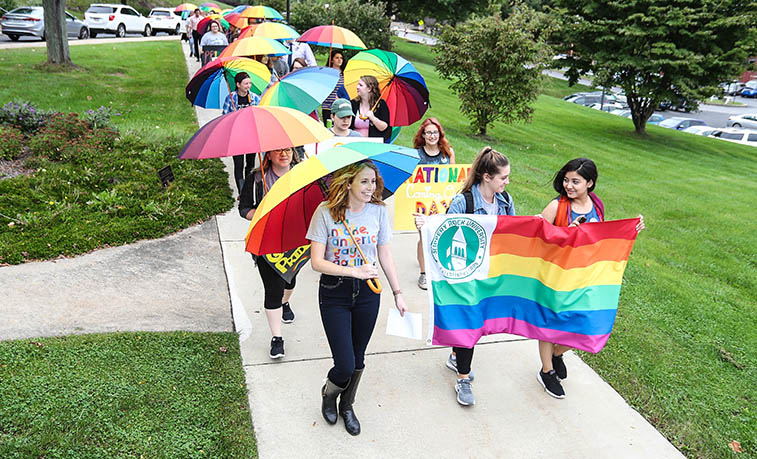 The President’s Commission on Gender Identity & Expression and Sexual Orientation at Slippery Rock University, which advocates for people who are lesbian, gay, bisexual, transgender and queer/questioning, has scheduled several programs to spread awareness during LGBTQ History Month.

SLIPPERY ROCK, Pa. — Intersectionality is a term that refers to the discrimination and disadvantages that affect people from overlapping social categories, such as race, class or gender. Like someone standing at a traffic intersection and facing peril from multiple directions, a gay black man might simultaneously encounter both homophobia and racism.

At Slippery Rock University, there's an advocacy group that's helping provide safe passage at these "intersections" where possible discrimination, intolerance and bigotry can occur. The President's Commission on Gender Identity & Expression and Sexual Orientation is spreading awareness about intersectionality as part of an October initiative that coincides with events and celebrations for the community for which GIESO advocates: people who are lesbian, gay, bisexual, transgender and queer/questioning.

"We are recognizing and embracing that the LGBTQ+ community is not homogenous," said Vanessa Vought, health promotion coordinator in Student Health Services, who is a co-chair of GIESO. "If we only think of one type of LGBTQ+ person, we would be only solving one specific issue and it could be at the detriment to another group. Intersectionality is this idea of solidarity and making sure you're inclusive but also working with other populations to show that if we band together, we can really help each other solve each other's issues. We are stronger together than if we are apart."

GIESO is one of seven Presidential Commissions at SRU that lead and engage the campus community with a vision to create a culture of respect, acceptance and celebration of people's differences and be active practitioners of change. GIESO is comprised of students, staff, faculty and administrators appointed by the president to volunteer their time and talents to collaborate with all campus constituents in promoting an inclusive and diverse campus community.

In addition to supporting awareness campaigns and other campus programs related to LGBTQ+ issues, GIESO assesses campus climate, advises University leadership on issues and recommends policy. Examples of issues that GIESO is addressing this semester include expanding and monitoring the implementation of the University's chosen name policy, which allows students to choose a first name instead of their legal name to identify themselves on campus documents and systems; submitting an update for the Pride Index, which is a national listing of LGBTQ-friendly colleges and universities; adding more gender-neutral restrooms on campus; and exploring housing options for LGBTQ+ students who may encounter homelessness.

GIESO will be spreading awareness related to LGBTQ+ issues via door tags for faculty and staff offices and tip cards distributed around campus that will provide advice for recognizing people's chosen name and using the pronouns people chose to identify themselves. The commission will also post LGBTQ+ history items on its Facebook and Twitter pages while advocating for intersectionality awareness using the hashtag #IntersectionalitySRU.

"For LGBTQ History Month, it's nice to look back at achievements and challenges overcome (by the LGBTQ+ community) to know that it is possible to make change," Vought said. "It helps motivate and inspire people."

Other October events at SRU related to the LGBTQ+ community include a Stride for Pride, a march for National Coming Out Day, 12:30-1:30 p.m., Oct. 10, starting at the Smith Student Center. The event, sponsored by SRU's Pride Center, will occur the day before the Oct. 11 national event. The Pride Center, located on the second floor of the SSC, is a space dedicated to providing a safe, nonjudgmental environment that welcomes LGBTQ+ people and encourages empowerment, awareness and education.